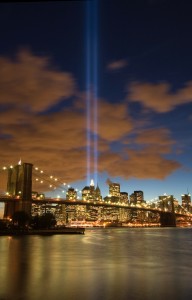 Today marks the anniversary of September 11, 2001. And, just so we’re all kind of on the same page, I thought I’d very briefly recap what happened. On that Tuesday morning, two planes flew into the World Trade Center, which was basically several really tall office buildings in New York City. Another plane flew into the Pentagon, which is where the US Department of Defense has their offices, in Washington, DC. A fourth flight, thought to have been meant for the Capitol building, where the US Congress meets, was taken over by the passengers and in the scuffle they crashed in rural Pennsylvania. All told, about 3000 people died that day, including the terrorists.

Now, this might seem to be an odd thing to focus on in this particular community. All the ninth graders were around six years old eight years ago. But when you really stop and think about it, the repercussions of the day are arguably innumerable, from the War on Terror in Iraq and Afghanistan, which has taken way more lives than that infamous day, to hate crimes against Muslims in America, as detailed in The Muslim Next Door, one of our summer reading books. 9-11 is still with us all, from being required to take off shoes and belts while going through airport security to a bumper sticker that says “9-11: We Will Never Forget.”

I have mixed feelings about the statement “We will never forget.” I wonder if never forgetting the wrongs that have been committed against us, whether those wrongs are towards us personally or communally, if we never forget the wrongs committed, that might mean we stay perpetual victims, and by victims I mean a people defined by the worst thing that ever happened to us or the worst thing about us. When we get into that kind of thinking, it can be hard to get out of. Perpetual victims also may forget that we too may not always be blameless, that we too sometimes may hurt other people. “We will never forget,” whether that comment is in reference to 9-11 or to something that happens in our own lives, “We will never forget” can become an invitation to organize lives around hopelessness, around anger, and around fear.

Y’all, we are all called to so much more than that! As Paul details in his letter to the Romans, which Emma read for us, we’re called to hold on to the good things, not to that which is destructive, to love one another. We’re asked to contribute to the needs of others, not to be snotty, and not repay evil for evil, but to take thought of what is noble in the sight of all, to directly quote Paul. We’re called to dream and to build towards the day of peace, as detailed in our last hymn, not constantly to dwell on the bad things that have happened in the past, not to keep reliving our past mistakes or past mishaps over and over again.

Is there another way we can remember? I suppose there is a way to “never forget” that might be worth considering, a way to “never forget” that’s not build around distrust. One way we could never forget, as cliché as it may be, one way to never forget is to try and remember what a gift it is just to be alive. It’s so easy to get caught up in the craziness of life—school can be very demanding, there’s always something due or something to study for or write, and that’s not even counting all the many co-curricular things practically each and every one of you do, teachers, students, and staff alike. We can all get so crazy, running from one thing to the next, that’s it’s so easy to forget what a gift life is. And like I said, that’s understandable, because, let’s face it, sometimes life doesn’t really feel like a gift; sometimes it feels like one really long homework assignment or a never ending cycle of chores. Even so, the way the lives of so many people were cut short on 9-11, not unlike the way the lives of so many other people whose lives are cut short, whether that be because of inadequate access to water or medicine or by something like cancer, our time here on earth is very precious. Paul’s letter to the Romans gives us some clues on living our own lives as best we can. Paul reminds us that by loving, by being authentic, by being generous, by being forgiving, those are the ways we can make our time here meaningful.

Maybe I was wrong. Maybe being asked to never forget is a good thing—as long as we look at in a particular way.

The Rev. Ann Bonner-Stewart originally preached this sermon at Saint Mary's School, an all girls' Episcopal boarding and day high school, two years ago, when September 11 fell on a Chapel date. Here is the outline of the service:  Download 9-11-09 September 11 for TYCWP This year, the 10th anniversary of 9-11 falls on a Sunday; for some, it will be the kick-off of the programmatic year. What will you do?

Ann has served on the editorial board of the Young Clergy Women Project for four years. She currently serves on the staff at Saint Mary's School, where she is chaplain, director of community service, and a member of the humanities and residential faculties.