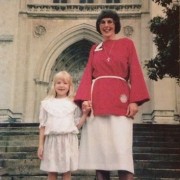 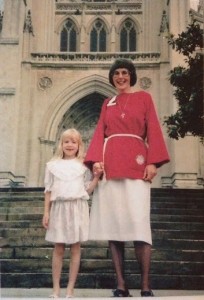 The author with Sister Angela, 1989

There was a brief period in my childhood, around age three or four, when I thought that my godmother was an angel. Literally. My confusion was understandable, as I hadn’t quite grasped either concept yet at that stage. I only knew that I had never seen her, but she sent me cards and presents for my birthday and Christmas, plus an Advent calendar every year. And I knew that her name was Angela.

Sister Angela was more than my godmother. She was also the founder of a religious community that had a deep and lasting impact on me. Angela started out as a nun in one of the traditional religious orders within the Anglican/Episcopal tradition. Habits, veils, vows of chastity and obedience—the whole nine yards. At some point, she felt called to leave the order and begin a new community that would be open to married lay women as well as those who were single. This community was shaped by the charismatic movement and inspired by the worker priests in Europe in the 1940s, whose ministry centered on working alongside ordinary laborers. The members live and work in the world, rather than living together in a convent. They still belong to their own local parishes. And they support one another in discerning and living out their vocations as Christians.

Over the 44 years since its founding, The Worker Sisters of the Holy Spirit has grown and changed considerably. Membership quickly expanded to include clergy, people who are divorced, and a parallel community for men called the Worker Brothers of the Holy Spirit. There is also the option of being a “Friend” or “Companion” to the order. Most recently, membership opened to non-Anglicans, and people from other denominations have joined. At each stage, the community has gradually affirmed its welcome of people from all walks of life.

My mother has belonged to WSHS nearly my entire life. Every year in the spring when I was growing up, she would leave for several days to attend the annual retreat. My grandfather, an Episcopal priest, has served as the community’s chaplain since it began and is only stepping down this year. So it was no surprise when Sister Angela invited me, at age 13, to join the community as a Youth Worker. The youth program was relatively short-lived and made up entirely of the children of community members. But it connected me with a community of great spiritual depth and wisdom, and it gave me access to opportunities for learning and worship that are rarely available to young people.

WSHS was also one of the first places that affirmed my call to ministry. When I was 19, Sister Angela asked me to preach at the healing service on the last night of the annual retreat. After the service, several members came up and asked me when I was going to seminary. Then, Sister Carol Luke, who was herself ordained, placed her hands on either side of my face, looked me right in the eyes, and said, “You are a priest.” I have never forgotten those words, or the way that they could see my vocation in me before I was even sure of it myself.

The Youth Worker program went up to 25, so at that age, I had to decide what my relationship with the community would be. I wasn’t ready to make a life commitment, so I became a Companion. It seemed like a good place to be, while I figured out what was next. By this time, my dad had joined the Worker Brothers, so it had truly become a family affair. At times, my attendance at retreat was motivated primarily by wanting to see family—and, as she grew sicker and weaker, by wanting to see Sister Angela herself.

Sometime in my childhood—after I came to understand that Sister Angela was a real person, not an angel—she had open-heart surgery. The doctors did not expect her to survive, and certainly not for another 20 years. Held up by prayer, she just kept going. She even rode her motorcycle right up until the last couple of years, all over the back roads near the retirement village where she and her husband lived.

The last retreat I attended was also the only one I’ve been to as a priest. I knew Sister Angela’s health was failing, and that this might be my last chance to see her. She asked me to preside at the healing service and celebrate communion. The look on her face as she received communion from my hands told me just how much it meant to her.

Sister Angela died two years ago, and WSHS is changing, as it must. Like all communities founded by a charismatic leader, they are having to figure out where God is calling them, now that she is gone. My relationship to WSHS is also changing. Directly and indirectly, WSHS taught me the value of community and how it is possible to be a community, even when you are very far from one another. This is one reason that I have felt so at home in The Young Clergy Women Project. Our members are dispersed all over the world, yet we are able to support one another in living out our vocations as Christians and as clergy. The seeds that were planted in me by WSHS are continuing to grow and take root in this next phase of my life.

Even though she can’t send me birthday cards or Advent calendars anymore, I believe that Sister Angela is still praying for me and supporting me, as she always has. Her memory continues to guide me as I seek out and create community in many different ways.

The Rev. Diana Carroll is the editor of Our Cloud of Witnesses and a member of the Board of The Young Clergy Women Project. She serves as Rector of St. Luke’s Episcopal Church in Eastport, a neighborhood of Annapolis, Maryland. More information about The Worker Sisters and Brothers of the Holy Spirit can be found at workersisters.org.

Generation to Generation
Scroll to top