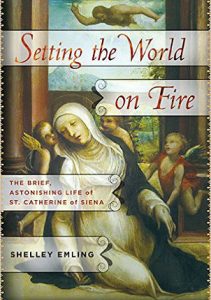 You’re not a Roman Catholic, but you just wrote a book on one of the church’s most beloved saints. Why did you choose to write about a saint, and why Catherine of Siena?

I’ve made a habit of writing about strong, interesting women. I wrote a book about Mary Anning, a fossil hunter in the 1700s. I also wrote a book about Marie Curie after meeting with her granddaughter. My publisher and I were talking about the popularity of the current pope and she asked if I’d ever be interested in writing a contemporary, secular book about a Roman Catholic saint. She recommended Catherine of Siena. To be honest, I had barely heard of her and wasn’t too keen on the idea initially. But then some bizarre things happened. I got lost one day in my car and found myself in the parking lot of the St. Catherine of Siena school in a town near my own hometown – a school I had never noticed before. Anyway, I thought maybe someone was trying to tell me something and so I decided to delve in and write the book. And I’m glad I did. In addition, I have a lot of Roman Catholic friends but had never really had a conversation with any of them before about saints. When I started asking around, many of them told me that Catherine of Siena was their favorite saint. My respect for their opinion also inspired me to write about her.

There aren’t really any pitfalls except that people may criticize you for not being critical enough of the saint – or for being overly critical. Sometimes you can’t win. People have very, very strong feelings when it comes to Roman Catholic saints – something I discovered while writing this book – and it is hard to satisfy everyone. I think when you write a secular book about religion you are always in danger of offending someone. I tried to be careful not to. There are definitely many benefits. I was able to learn so much more about the Roman Catholic faith. The history of the papacy is fascinating – and its endurance astounds me. I was inspired to read more about Pope Francis. I am so much more in awe of him now after learning about the popes of the past – especially the ones during Catherine’s time. I have a much greater respect for the Roman Catholic faith and for the Roman Catholic church as an institution.

You wrote an article for Huffington Post entitled, “Why Catherine of Siena is a Role Model for Women in a Man’s World.” Can you get a little more specific and tell us about the particular challenges Catherine faced as a woman in the 14th-century church, and why she is a role model to women in ministry?

The structure of society in the Middle Ages prevented women from buying property, holding office, or even taking care of their own finances. Girls did not go to school. They were expected to marry by the age of 12 or 13. Women were so subservient to men that you’d be hard-pressed to find many in those days with the courage to even look a man in the eye when talking to him. But as I wrote, Catherine did not let any of that stop her. She had something to say and she would not be silenced. By adroitly blending boldness with humility, she persuaded Pope Gregory to return the papacy from France to Rome in 1377. But she never once doubted his authority. Instead, she told him in her letters, “Esto vir” – which means “Be a man” or “Be the boss.” Catherine was able to influence church policy by being direct and respectful. She was patient but relentless when she wanted to accomplish something. All this makes her an excellent role model to women in ministry today.

Calling out clergy for their avarice and convincing the pope to return the papacy from France to Rome is an amazing feat; even in today’s clime, it’s hard to imagine. You mentioned that Catherine was “forthright but never rude.” Some might say that the simple act of a woman being so forthright with clergy would be considered rude and potentially insubordinate, especially to a 14th-century Roman Catholic priest. What was it about Catherine that allowed clergy to actually listen to her? How did she not get burned at the stake for being so outspoken?

Catherine was able to call out even the pope because she did so both humbly and appropriately. Simply put, I believe she was successful because she was so pious and because there was no doubt that she was always – always – motivated by her desire to advance the interests of the Roman Catholic church as a whole. What Catherine wrote came directly from God. She always said she was just the messenger. The fact that she wasn’t burned at the stake is because the church hierarchy accepted and truly believed that what she said and wrote came directly from God. Of course, people did try to trip her up. They would poke her when she was “in ecstasy,” for example, to find out if she was faking. But no one could ever uncover a ruse or catch her in a lie. Therefore, she earned a lot of respect.

You are a Christian and attend a Presbyterian church. How has researching Catherine influenced your own faith?

It’s definitely made my faith stronger. But my faith was already strong. I was raised Lutheran but now consider myself Presbyterian. I have three kids that I am raising to be faithful – not always easy in this day and age. Sometimes they fight me and don’t want to go to church. Sometimes even I don’t want to get up and go to church. But Catherine always went to church – even when she could barely stand because she was so weak. She was constantly praying. She never doubted God’s love. She was just so sure – and that made me even more sure about my own faith. Plus, learning about all that has transpired in the history of the Roman Catholic Church made me appreciate the resiliency of this institution.

How does Catherine of Siena’s life inspire and instruct people of faith today?

I think that when people of faith today read about Catherine, and how she stepped up to care for those with leprosy and suffering from the plague – with no thought for her own well being – they will be inspired to care for the sick and elderly in their own communities. When they read about how she reconciled a fractured church during a violent era, they will recognize the rifts that exist today, such as the rifts between those who are more conservative Christians and more liberal Christians. We live in fear of terrorism. People in the Middle Ages also feared war and unrest. I believe that how Catherine handled herself – with grace, resolve and fearlessness – will inspire people to behave in the same manner today.

Hailing from the Lone Star State, Shelley studied journalism and has covered news all over the world, from Central America to Africa to Europe. She is currently a senior editor at The Huffington Post. Her most recent book, Setting the World On Fire: The Brief, Astonishing Life of Catherine of Siena, was released in April.

You Are My Beloved