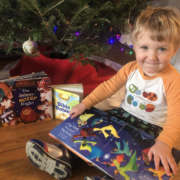 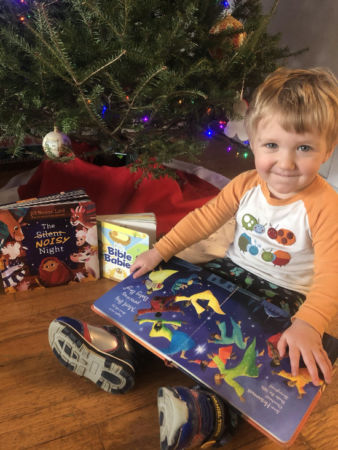 The author’s kiddo approves this message.

My internet search for “Christmas Board Book” was yielding snow, candy canes, Santa, and saccharine messages about “giving” as the true meaning of Christmas. Worse, searches for “Nativity Board Book” and “Baby Jesus Board Book” turned up white Jesus and a skinny post-partum Mary. The closest to a non-white Jesus I could find was the Holy Family as animated vegetables, and even there, Mother Mary was a very skinny veggie with eyeliner and bright red lipstick after just giving birth to a baby pea.

I was searching for a board book that tells the original Christmas story with Mary, Joseph, angels, shepherds, and baby Jesus. I am okay with a little historical inaccuracy (like a nativity mash-up that includes the magi with the shepherds – or even a shepherd made of asparagus), but I am not okay with teaching my blonde-haired, blue-eyed baby boy that Jesus looks exactly like him. I don’t want him to connect holiness with gendered beauty norms. My white son needs to know that God chose to come to earth as a brown-skinned Palestinian Jew, and that God celebrates bodies of all genders and sizes, including body shifts after pregnancy. In short, I don’t want illustrated children’s books to promote white supremacy or patriarchy.

There are children’s nativity stories that fit these parameters (like Who Built the Stable? by Ashley Bryan and the out-of-print The Story of Christmas by Jane Ray), but they aren’t available as board books. My toddler is old enough to insist on turning the pages himself but not old enough to turn the pages without ripping them. This means that we need baby-friendly board books with a non-white Jesus and realistic post-partum Mary. “Does this book exist?” I asked on social media. Fortunately, my crowd-sourcing revealed that four such books do exist. Here they are.

Goodnight Manger was the #1 recommended book by other young clergywomen. Mary (called “Mama” in this book) embodies exhaustion, frustration, and determination as she sets boundaries with the noisy guests. Joseph (called “Papa”) is an active, engaged father with the “precious Baby Boy.” While Jesus is assigned male at birth, nothing indicates that the Triune God is gendered. The dancing, flying, singing, whimsical angels have diverse skin and hair colors. The magi have different skin tones while avoiding stereotypical depictions. Readers who care about Scriptural accuracy may not like that the manger is in a “stable” and the “three kings” arrive while the shepherds are there, but those are small quibbles. Children will remember the pictures and the feelings, and we can deal with exegetical details after we graduate from board books. The book concludes with the optimistic instruction: “Goodnight manger. / Goodnight stall. / Time to sleep now, / One and all.” Do any kids go to sleep when books tell them to? Mine didn’t, but it’s Advent, so we’re called to hope.

The Silent Noisy Night is not a book to read right before bed! It excitedly shares Jesus’ birth story and invites us to share that good news with the same joyful abandon. One young clergywoman noted, “This one makes a great Christmas Eve children’s sermon. The kids usually get a kick out of making all the animal noises.” The shepherds and magi appear at separate times, and the “kings” (as they are called in this book) are presented in silhouette. The angels share the same brown skin as the shepherds. The final five pages depict contemporary people celebrating Christmas, and they include people with skin tones both lighter and darker than the biblical characters. While all of the people share similar body sizes and frames, the book avoids essentializing the feminine form. Many of the characters could be read as multiple genders. There are a few instances of he/him/his pronouns that could easily be substituted with “God” or “Jesus” by the adult reader.

The toddler and I already loved the Frolic First Bible, so I went looking for what else Sparkhouse’s Frolic series would offer. If Frolic would come out with a Christmas-only board book, I’d buy it immediately. As is, Bible Babies features four baby stories: Isaac, Moses, Samuel, and Jesus. I wish that at least one of the four baby stories featured a baby girl, but that’s more of an issue with the original text. (Who were the editors going to choose? Lo-Ruhamah?) The four selected babies have diverse family structures, including the women who surround baby Moses. I will be keeping this book out all year round, and it would be a great gift for churches to give to newborns or expectant parents. The default skin tone for the biblical characters is brown, and the pictures of contemporary children, shown on the final two pages, have a variety of skin tones.

I didn’t actually get a copy of A Child is Born. The book is unfortunately out of print and used copies are going for $40+. It was published by Jump at the Sun, an imprint of Disney Publishing’s Hyperion Books for Children. But the reviews, both online and from people I trust, look like just what I’m desiring. I’m writing to the publisher of A Child is Born to request a reprint, and I hope you do, too! Illustrator Floyd Cooper has won multiple Coretta Scott King honors and ALA awards, and I am excited to support the other work in his extensive catalogue, even if this was his only illustrated nativity board book.

Out of these four board books, all of the authors and three out of four illustrators are white. While I am grateful that white authors and illustrators are now striving for inclusive images in board books, the fact remains that the publishing industry is overwhelmingly white and the disparity in Christmas board books is compounded by Christianity’s collusion with white supremacy. And yet, in the words of Frolic Bible Babies, “Jesus still gives us hope today.” We can show the next generation that Christianity and whiteness are not synonymous. As The Silent Noisy Night urges, “It’s hard to stay so silent when we’ve heard the greatest news.” We can speak up and lift our voices in protest and praise, as Mary did. In Goodnight Manger, “Mama says, ‘Here’s what we’ll do.’” Let’s listen to Mary and embody God’s story in ways that lift up the lowly, cast down the mighty, and fill the hungry with good things, from generation to generation (Luke 1:46-55).

The Rev. Diane Kenaston (she/her) is pastor of University United Methodist Church in St. Louis. She and her clergy spouse, Rev. Dr. Adam Ployd, have one delightful toddler and one grumpy dog. She graduated from Candler School of Theology at Emory University in Atlanta, Georgia, and previously served churches in West Virginia, where she is an elder in full connection.