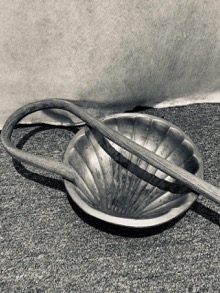 From when the author and her congregation remembered their baptisms and belovedness.

One of my favorite images of a pastor is that of shepherd. As a shepherd, I take care of my flock, making sure they are fed in belly and spirit, trying to keep them on the path, and jumping in to offer care and support when they are sick or hurting. When they are facing a health crisis I often remind them that they are not alone: God is with them, yes, but so are the other members of our flock. Letting the church be the church can be difficult when you’re on the receiving end of the help and support, but caring for one another is one of the ways we live out our faith and discipleship. Sometimes it’s not a church member who needs the church the most – sometimes it’s the shepherd that needs the flock.

On Epiphany Sunday, my husband began to complain of back pain. We both chalked the back pain up to restless nights spent tossing and turning and coughing after he picked up a bug of some sort visiting family at Christmas. By Tuesday, he could barely walk, and on Wednesday he finally went to Urgent Care, where they guessed that he had a pinched nerve. The next morning he woke up with the left side of his face looking like he had a stroke. When he drank his coffee, it spilled back out. When he tried to stand, his knees buckled and he fell. This was definitely more than a pinched nerve.

After his mother arrived to watch our four-and-a-half-year-old twin girls, we went to the Emergency Room. Waiting in the hallway on a gurney for hours as they ran different tests, his legs became weaker to the point that he could no longer walk. The nurse practitioner kept a close eye on us, his eyes betraying his concern as test after test came back normal. As evening drew closer with still no answers, he called a neurologist who within minutes gave a diagnosis of Guillain-Barre Syndrome (GBS).

GBS is a rare autoimmune disorder triggered by a virus in which the immune system goes into overdrive and begins attacking the myelin sheath of one’s peripheral nerves. It can progress incredibly quickly, and for some it’s a matter of hours before they are paralyzed and on a ventilator. My husband’s had progressed very slowly and they began treatment immediately. Once he was in a room I went into crisis mode: I messaged our family members to tell them what we knew; I asked one of my sisters to come up from Maryland to help watch our daughters while I was at the hospital; I called our District Superintendent; I alerted my Staff-Parish Relations chairs; I tried to explain to our daughters what was happening, kissed them goodnight, and went back to the hospital.

Everyone was quick to respond with offers of help. “Anything you need,” they said, but the problem was that I didn’t know what I needed. I didn’t know how long I would need help, or what people were willing and able to do, or what they might think was too large of an ask. In my previous congregation, I remember the outpouring of care lavished upon me when our dog Maui died. A member texted that she had prayed for me all day, another brought me a grilled cheese sandwich, still warm from the griddle, and another offered his own yard as a final resting place for my canine companion. When I was unable to speak through my tears, his daughter offered a prayer at the graveside and I was overwhelmed by grace.

And yet, despite this experience of compassion from my “sheep,” I was afraid. I was afraid of what my new congregations would think if their pastor, their shepherd, was unable to handle a crisis on her own. It felt like everything was crumbling and I wasn’t sure which pieces to grab hold of first.

One of my Staff-Parish Relations chairs had responded first with offers of general help and the assurance that he and his wife would be praying for us. Within minutes he fired off a second email: “…and I mean anything, cover service, sit with the girls, mow the lawn, cook food, drive someone somewhere. Whatever we can do to help, we will happily do.”

Saturday morning I re-read those lines over and over, as my sister drove home and I waited for my mother to arrive so that I could be at the hospital. I knew that these people wanted to help, and that I wasn’t doing anyone any good by not letting them. I knew I could not do this on my own. Tears flowed down my face as I wrote to him that my daughters had been on a steady diet of mac’n’cheese, pizza, and cereal these past few days. They need some vegetables, I told him. Could you bring dinner tonight? They showed up in the afternoon with homemade beef stew chock full of vegetables, and groceries: milk, bread, fruit, and more vegetables. I was touched by their generosity and thoughtfulness, although the real gift they gave me wasn’t so much the food, but rather the assurance that it was alright to ask for help and that my church would support us.

I didn’t take off on Sunday, which I realized was a mistake because as soon as I stepped in the pulpit I started weeping. We remembered our baptisms and belovedness, and despite my tears (or maybe because of them) many shared that it was one of the most meaningful services they’ve been a part of in a long time. By the time fellowship was over the church ladies had created a meal train, enlisted people to babysit as needed, and even figured out who could take care of snow removal at the parsonage later that week.

Every night food showed up at my house for dinner. Every morning began with messages of support and prayer. A young man in my church discerning his own call to ministry visited my husband in the hospital and prayed with him. When he was moved to a rehab facility, they rejoiced with me. When he took his first steps, they cheered with me. When my daughters shared the countdown of “how many days until Daddy comes home” they applauded. And when he came home after 22 days of being in the hospital and at rehab stronger and more mobile than we had hoped for, members helped me move the guest bed back upstairs where it belonged instead of in the middle of our living room.

Through it all I found countless reasons to give thanks to God. I thanked God for placing us in a town close to a remarkable hospital. I thanked God for my family members and friends who traveled from out of state to help take care of things at home, for all the people who made sure we had food to eat to give us strength for this part of our journey. I thanked God for the way so many people covered us in love and prayer, because I could not have done it without them.

Sometimes a shepherd needs their flock more than the sheep need the shepherd. I continue to give thanks for all of the ways my churches were church for me and my family when we needed it most.

Amanda Rohrs is a United Methodist pastor serving in the Greater New Jersey Annual Conference. She met her husband, who is also a pastor, at Drew Theological School where she earned her MDiv and an STM in New Testament and women’s and gender studies. She is the mother of twin daughters, and writes (every now and then) on her blog.

Talking to Young Children about Death

When the Professional is Personal
Scroll to top