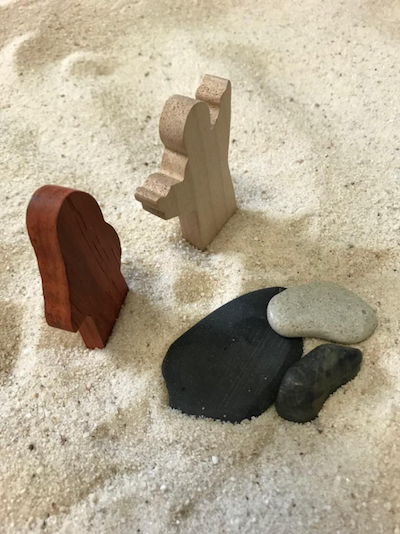 There are moments in ministry when I feel marvelously competent: when a child interrupts my Sunday School lesson to make a connection to something we learned weeks or months ago, when I preach a sermon that I know said what needed saying, when the kids I work with lead such a great Ash Wednesday worship experience that my not-so-liturgical church gladly embraces it.

And then there are moments when I know I have no idea what the heck I’m doing.

This year has been full of the latter kind of moments.

Two years ago, when I was asked to serve as moderator of my state denominational organization, I was flattered. I would be added to the list of great people who’ve come before me in that position. It would look awesome on my resume. And I was assured it wasn’t too big a thing. Over the course of the three years of service, I’d plan our annual meeting once (a lot of work, but doable work), lead coordinating council and business meetings (a bit out of my comfort zone as a minister to children and families who seldom uses those skills in the local church, but still doable), and eventually recruit a dozen or so people to rotate onto the council (children’s minister = volunteer recruiting champion). So I said yes.

Little did I know.

During my moderator-elect year, the organization dealt with a difficult situation that landed me in hours and hours of tense and frustrating meetings and didn’t end in a way that made anyone particularly happy; a fairly contentious council meeting just before I took over as moderator made the general discontent abundantly clear. Then, just as my moderator year began last April, the organization found itself without a staff at all, barring an administrative assistant who’d begun work the same day the last of our former staff departed.

The good news was that there were transition guidelines already in place. I just had to follow the directions for appointing committees, hiring an interim, and operating in the meantime, plus do a fair amount of guessing and hunting down answers about how things were normally done in the office. It was a time-management challenge, but it was mostly okay. Follow the rules as they’re laid out. Ask questions. Figure out who has what pieces of the institutional memory.

The bad news was that I also had to lead a fall council meeting for a group of people who were frustrated with one another and with the position we were in as an organization. There was nothing in the transition plan about how to deal with that. I’m a nine on the enneagram. I hate conflict. I want everyone to be happy. Gulp.

A few days before the meeting, which I was admittedly dreading, I found myself straightening up our Godly Play classroom at church for the upcoming school year. As I sorted story pieces back into the correct baskets and lined the parable boxes up on the shelf, it finally hit me. We needed to name this mess that we were in as an organization. We needed to call it a desert. And we needed to acknowledge what deserts are like, as we do in the beginning of so many of the sacred stories in Godly Play.

I pulled out the sandbox and put it on a table at the beginning of the fall council meeting.

“No one goes into the desert…unless they have to,” I began.

That day, I told the story of the Great Family — of Abraham and Sarah. The story begins with a harsh warning about deserts — that they’re dangerous and that no one goes into them unless they have to. Sarai and Abram, as they’re called at the beginning of the story, then embark upon the relatively safe, river-guided journey from Ur to Haran. It’s painted as a long and arduous adventure, but anyone paying close attention to how little of the sandbox is used for that part of the story can tell that this is not going to be the main event. Indeed, before long, God comes close to Abram and Abram comes close to God and Abram knows that he and Sarai are to go to a new place that God will show them. And so they set out into the desert. The story makes it clear that there are fewer people with them and that they have fewer resources. There’s no river to follow this time. It’s now that the journey becomes truly dangerous.

“No one goes into the desert…unless they have to,” I repeated more than once.

But as they travel, Sarai and Abram make a joyful discovery. God is in each place, not just in the safe and established place they had left behind. They mark the places they’ve seen God with altars. And when they do finally reach the place God has been leading them, they arrive with the confidence that God is in that place as well.

Even as I moved the wooden figures around the sandbox, I felt the tension in the room begin to slide away. There was something powerful in saying aloud to one another, “This is hard,” while at the same time acknowledging to one another that our situation was not impossible. And when we began to wonder together — when we began to talk about where we’d seen God and where we were looking for God in the coming months, it was almost magical. There was a little wave of excitement. People smiled as they grabbed hold again of their love for the work the organization does. The committees that weekend made bold, forward-thinking plans. In fact, I think the meeting was (almost) fun, which felt good and special in that difficult moment.

It didn’t make the transition process for our organization during the following months perfect or easy or enjoyable. But I do think it let us name where we were and claim our story in a way that allowed us to keep moving forward. I think it even gave me permission to say, “I don’t know quite what I’m doing here in this role, leading you, but hang on — we can do this together. This desert isn’t forever.”

And then, near the end of my year as moderator, I got to pull the sandbox back out and tell a story about the people of God coming out of the desert:

“Because we are in a new place. We are changed and recharged. We are ready for a new season.”

Rev. Amanda Standiford serves as the Minister to Children and Families at Lexington Avenue Baptist Church in Danville, Kentucky.

Facing Fear: A Review of Everything Happens for a Reason

Swords Into Plowshares
Scroll to top