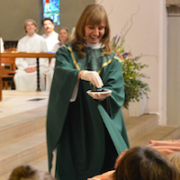 Blessing of the worms for All Saints’ compost bin

I had just arrived a block west of Rodeo Drive to the church I would serve in Beverly Hills. The rector told me not to bring my lunch, that it would be the church’s treat on my first day. I decided that morning that the lunch venue would offer me some clues about how to navigate my future ministry and the people I would serve. Where would we be eating lunch?

When I was a seminarian, part of the thrill of preparing for serving a church community for me was the thought of integrating into the community I served. My bishop told our ordination class, “Be prepared to go anywhere and serve anyone.”

Being a young woman from Central Indiana, ministering to people in just about any place other than the Crossroads of America felt like a great frontier. I read the experience of author Kathleen Norris, a Washington, D.C., native, who discovered a vocation to serve God and God’s people in the quiet monotony of the Great Plains. As she writes in her spiritual autobiography Dakota, “The fact that one people’s frontier is usually another’s homeland has been mostly overlooked.”

I had arrived at my very different frontier: amid selfie-taking tourists, harried traffic, and busy storefronts.

On my first office day at All Saints’, I met the people who called this place their spiritual homeland. And as the noon hour drew closer, it was time for lunch. END_OF_DOCUMENT_TOKEN_TO_BE_REPLACED 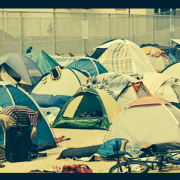 It was the seventh day – or the last day they could push off the eviction. The railroad workers and MDOT employees and law enforcement officers followed the instructions from on high.

Two rules:
1. The campsites must be wiped out no matter the cost of natural ruffage.
2. The ruffians who live there must be removed and not physically harmed.

They donned their hard hats and shiny vests, their handcuffs and megaphones. Beeping from the reversing of heavy machinery began to wake the people in tattered tents in the woods behind the railroad tracks. Police officers began to bark in their megaphones: “ATTENTION: YOU HAVE TEN MINUTES TO EVACUATE THE PROPERTY BEFORE YOU ARE ARRESTED FOR TRESPASSING. TEN MINUTES. THIS LAND BELONGS TO THE CITY.”

Sleepy people dragged their tired bodies from their tents. Grabbing at their guitars and snagging their one packed bag with the few coins left over from the previous day of spanging – it was all they had time to save. Barefoot and bedraggled they turned around as the bulldozers scooped up all they had in one foul swoop and chucked it in the dumpster truck by the tracks. Wide dirt patches stood empty where “home” was once claimed.

And everything – every tarp that kept them dry, all the paperwork that got them IDs and services, each blanket to keep them warm – was carted away in dumpster trucks, and they were left with nothing.

This is the Word of the Lord?