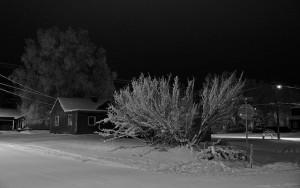 Early in the morning, on the first day of the week, while it was still dark, Mary Magdalene came to the tomb.

My father died of pancreatic cancer a few years ago. He was relatively young, only 58. The night before he died, I kept watch with him. His body started shutting down. I had sat at the bedside of enough dying people to know that when people die after a long illness, their feet and lower legs seem like they’re dying first. His feet turned purple and cold. It would not be long. I sat with my dad in the dark of the night. The rest of the house was quiet. So quiet. I could hear every gasp, every rattle.

It was the middle of January, and a blizzard raged outside. My husband drove through the night to be with me, but the snow piled up along the shore of Lake Michigan, delaying his arrival. Pain wracked my dad’s body. The hospice nurse couldn’t make it out in the storm, and I had already given all of the narcotics in the emergency comfort pack that she had left earlier that day. My dad was anxious, not about dying, but about what was happening to his body, and about the pain.

I could do so little to make him comfortable. I brought him a popsicle, but it melted in a bowl on the nightstand. I felt so alone, so helpless; exhausted by grief and a desire to fix something that was simply not anything that I could fix. He was restless—the hospice nurse had warned about this, that he might not rest if he sensed one of us in the room. People who are dying are like babies in that way, she told me. I did not understand then what she was talking about. Now, after two babies of my own, I do. I tried to rest outside in the hallway, but I did not want to leave him alone. So we sat in the unsettled darkness, the howling wind muffled by the falling snow.

I prayed for death to come quickly.

And then, my dad asked me to sing with him.

Into the darkness, we sang. There, in those ordinary moments of loving and letting go, in the ordinary darkness of a quiet house, the promise of the resurrection became so real. The love that holds us beyond the death that was so near filled our hearts with song.

Not only did my dad sing, he sang the baritone line. He was almost dead and singing harmony. We sang all of his favorites, hymn after hymn. Great is thy faithfulness, When peace like a river, Come thou fount of every blessing. We sat propped up on the big bed as his body slowly ceased to do the things that it needed to do to stay alive.

Later that day, my father died.

While it was still dark, Mary Magdalene went to the tomb. This line gets me every time.

John’s gospel begins with a mysterious, glorious, divine light coming into the world–“in him was light, and the light was the light of the world.” But here, at the end, Mary Magdalene stands alone in the garden, in the dark.

When Mary arrives at the tomb, she finds it empty. Jesus has died, but now it seems that something even worse had happened. His body was missing. Even in death, it seems, they could not let him rest. She might have rubbed her eyes; after all, it was still dark. Everything else seemed perfectly ordinary. So ordinary, in fact, that when Magdalene sees Jesus sitting near the tomb, she thinks he must be a gardener, quietly working in the shadows.

This big, huge thing that God is doing, this thing that will change the world forever, comes about quietly in the dark. The gospel writer tells this story without embellishment. Jesus comes to Mary while she is weeping, and he calls her name. It’s as simple as that, an ordinary gesture. And there, in the darkish dawn, the world is changed forever.

The resurrection stories are stories about an extraordinary, the extraordinary thing, in an ordinary world. The light of Easter comes not as a brilliant flash, but as the glimmer of a lamp held by the unsteady hand of one of Jesus’ friends. It comes as the slowly creeping dawn. It comes as songs on the lips of one who is dying. It comes as Jesus, meeting us in the dark.

April Berends is an Episcopal priest. She lives on a mountain in Tennessee and serves a parish in downtown Chattanooga.

Faith in the Flesh
Scroll to top