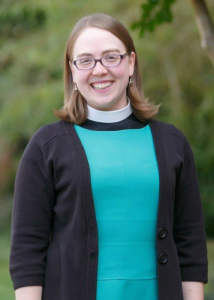 A few weeks ago, I finally watched Beyoncé’s visual album Lemonade from start to finish.

I was aware of the album when it first came out last year. I remember seeing the video for the song “Formation” and reading an article or two about the controversy that it sparked. I even watched the Saturday Night Live parody about white people freaking out at discovering that “Beyoncé is black!” But I don’t really follow pop artists, or celebrities in general, and I’ve never been into music videos, so Lemonade quickly faded into the background as other stories took its place. Except this one image that stayed in my head: Beyoncé dressed as a southern belle with both middle fingers up at the camera. That was pretty hard to forget.

Early one Sunday morning in January, while lying in bed trying to convince myself to get up, I found myself listening to a piece on NPR about the spirituality of Lemonade. That got my attention. The speaker was Dr. Yolanda Pierce, a Professor of African-American Religion and Literature at Princeton Theological Seminary. She was describing the significance of Lemonade as an expression of the spiritual lives of black women, who do not always find themselves reflected in their own religious traditions. I was intrigued by her statement that listening to, and especially watching, a popular R&B album had been a religious experience for her: “I walked away from this album with the profound sense that I’d been to church.”

Then the Grammys happened, and one of Beyoncé’s pregnancy announcement photos appeared in my local newspaper, and I decided it was high time for me to watch Lemonade for myself and find out what all the fuss was about.

I was completely entranced. Beyoncé’s performance is stunning. She is by turns powerful, strong, joyful, vulnerable, angry, and heartbroken. The imagery that accompanies her words and music is captivating, forceful, disturbing, tender, and redemptive. Watching and listening, I was moved by the story she was telling and the journey that she was inviting me to go on with her. Yet at the same time, I knew that I was missing a huge amount of what was going on. The cultural references, the meanings of words, the symbolism—so much of it was completely lost on me. I was an English major in college, so I approached Beyoncé’s songs as poetry and the film itself as a text. I wanted to dig into them, analyze them, and uncover their meaning, but I didn’t have the tools to do it. I felt like I needed footnotes and commentaries to explain what I was hearing and seeing, as I would have if I were reading Shakespeare or James Joyce. I wanted something that would help me make sense of language and images that belong to a culture other than my own.

The day after watching the film, I went looking for analysis online, especially pieces by black women. That was when I really started to understand how much I didn’t understand. Many of the black women who appear in Lemonade alongside Beyoncé are famous and accomplished in their own right. One of them is Serena Williams, who must surely be one of the most famous black women in the world. But when I was watching it, I did not recognize a single one of them. I didn’t even realize I should recognize them. I thought they were simply unknown actors and dancers, such as might appear in any music video.

The same was true of the sequence in the song “Forward” that shows mothers holding up framed pictures of their children. As I looked at the grief on their faces and the way those shots were staged, I thought, “I don’t think those are actors. Maybe these really are pictures of their children who have been killed.” I had no idea I was looking at the mothers of Trayvon Martin, Michael Brown, and Eric Garner.

My lack of recognition is partly the result of getting most of my news from radio, specifically NPR and the BBC. I hardly ever watch news on TV, and I don’t read much of it online, so I often don’t have any visuals to accompany a story. There are a lot of celebrities of all races I don’t recognize by their pictures, unless they are among the top echelons of movie stars. And yet, not to recognize any of the significant, powerful, celebrated black women who participated in creating this work of art is truly astonishing. It has to be about more than simply the way I consume the news. It’s that their pictures (and their names and their stories) have not been part of the general environment in which I live. If and when they have come to my attention, I seems I haven’t taken the time or energy to commit them to memory.

There were many other aspects of Lemonade that I learned about from reading those analysis pieces: the African goddesses Beyoncé was evoking and embodying, the ways that the narrative of turning lemons into lemonade speaks to experiences shared in common by many black women, the significance of using imagery and clothing styles from the deep south—including those historically forbidden to black women. But I still felt there was so much I wasn’t grasping, and it went beyond the words and phrases I literally could not understand, even after looking  up the lyrics.

I kept coming back to a phrase from the very first article that I read when “Formation” came out: that I am not the intended audience. This album is not for me or about me, and no matter how many details might be explained to me, watching it will always feel like watching a foreign film. It won’t ever feel like Beyoncé is speaking to me or speaking my language, because she very intentionally isn’t.

That’s when what should have been obvious from the start finally hit me: this experience of watching something that belongs to another culture, that is not intended for me, mirrors the experience that most people of color have in this country all of the time. The difference is that I have the choice whether I want to dive into another culture or not. The landscape may be shifting slowly (very slowly: see this year’s Oscars), but the vast majority of art and media that is widely available in the United States is still produced by and for white people. I never have to go out of my way to find news, TV shows, music, magazines, websites, movies, and even advertisements that are aimed at people like me—and probably feature people who look like me. I may not always like or agree with all of it, but I don’t wonder whether I really understand what it’s saying, and I never doubt that it’s meant for me.

The reality is that to survive in this country as a person of color requires learning and continually navigating two cultures: your own culture, and white culture. As a white person, I only ever had to learn one: my own. Learning about other cultures has to involve a conscious effort on my part. The same week I watched Lemonade, I also went to see the documentary about James Baldwin I Am Not Your Negro. It played for about a week in the smallest theater at our local cinema. My point is that I have a choice whether to consume art and media produced by and for people of color. I can do it when I feel like it and avoid it when I don’t feel like it. That’s pretty much the definition of privilege right there.

Which leaves me asking myself why I wanted to watch Lemonade in the first place. I am certain that some of it has to do with the intense portrayals of strong, empowered femininity, which speak to me as a woman even across the differences of culture. Some of it has to do with that basic human fascination with “the other”: the same interest that drove me to try to understand the plays of Bertolt Brecht when I studied German literature. But I think the real reason lies in something that James Baldwin himself said: “The history of America is the history of the Negro in America. And it’s not a pretty picture.” I will never truly understand myself, my culture, my country, if I do not understand the history—and the present lived experience—of everyone who lives here. Not only those who look and talk and think like me.

Diana Carroll is an Episcopal priest currently serving as rector of St. Luke’s Eastport and chaplain at St. Anne’s School of Annapolis. She lives in Annapolis, Maryland, with her wife, who is also a priest.

Our Bodies, Our Selves: Women’s Bodies in the Pulpit

All of the Fun, None of the Work?
Scroll to top