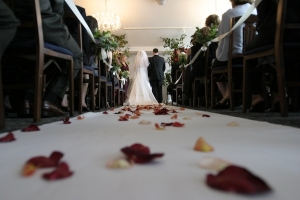 In times of solemnity, we have all heard things or said things that were unintentionally hilarious.

I recently watched the movie “Four Weddings and a Funeral.”  I found the romantic leads to be one-dimensional, and the movie wasn’t particularly funny, with the exception of one scene. Rowan Atkinson, a British actor most famous for depicting Mr. Bean on screen, is a nervous priest officiating one of the weddings. His scene had me hooting, and he ended his first prayer by saying, “…who reigns with you and the Holy Goat,” before self-correcting and saying “uh, er, Holy Ghost.”

The anxiety of Rowan Atkinson as priest is squirm-inducing and the wedding guests stare at him intently, their anxiety increasing as they await his next malapropism. He makes many, including asking the groom to repeat after him that he promises to take the bride “to be my awful wedded wife.” The groom modifies the words to say, “lawfully wedded wife.” “That’s right,” the priest admits, before rushing to end the service (and the end of his misery!) by concluding, “In the name of the Father, Son, and Holy Spigot …Spirit. Amen.”

Movies, of course, tend to hyperbolize the mistakes made by a character for comedic effect, but there was enough truth in that scene of “Four Weddings and a Funeral” to make it memorable to me. I’m sure many of us could share stories of things that we have heard or things we have said in times of solemnity that were unintentionally hilarious. One pastor told me that she accidentally called God “immoral” instead of “immortal.” One male colleague at my last church told me that he was ministering to a family before a funeral, and he suggested chlamydia as a good choice for the flower arrangement (unfortunately, chlamydia is not a flower; it’s an STD).

My Dad went to a wedding in the 1970s. The officiating pastor was elderly, and it was a hot August day, and there was no air-conditioning in the church. Who knows whether it was the heat, the pastor’s age, or some other factor, but the pastor was not with it. During the vows, the pastor said, “Do you, Larry…” and the matron-of-honor (who was the bride’s sister) whispered loudly to him, “Earl!  His name is Earl!” The pastor then said, “Do you, Larry Earl, take this woman, Edna…?” The bride’s name was Linda. No one corrected him this time, and everyone joked afterwards about whether the couple were actually married since the pastor never got their names right.

When my Grandpa Art turned 80 years old, his children and grandchildren gave him as a present a new suit. He wore it to church the following Sunday, and we all sat in the pew with him as the pastor said during the announcement time, “We’re so happy to see Art this morning in his birthday suit.” The pastor caught his mistake immediately, and he blushed deeply. The laughter that followed was not directed at him, however, but rather with him; the laughter was—as grace is—warm and generous. Grace abounds.

Because grace is abundant and laughter does us good, I invite you to share your own stories in the comments section below. What are some examples of verbal bloopers in your pastoral context?

Emily has been serving as Associate Pastor of First Pres Maumee in Northwest Ohio since January 2015. She previously served as a pastoral resident at Bellevue Presbyterian in Washington State. She holds degrees from Princeton Theological Seminary and Whitman College.
Emily grew up in Seattle; therefore, she recycles, makes her own granola, and enjoys spending time outdoors. She averages reading over 35 books a year.
Image by: Blake Newman
Used with permission
https://media.myworshiptimes31.com/wp-content/uploads/sites/3/2018/07/29165423/bride-ceremony-chairs-hggb-july-2018.jpg 400 600 Emily Elspeth Mitchell https://youngclergywomen.org/wp-content/uploads/sites/3/2017/05/YCWILogo_Vert_Black-300x229.png Emily Elspeth Mitchell2018-07-03 04:00:002018-11-13 11:31:38Worship Bloopers

We Really, Really Love You
Scroll to top