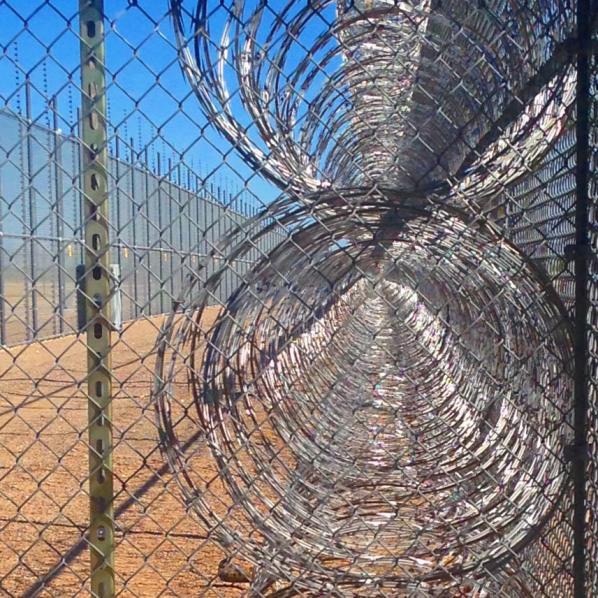 I have always gravitated to certain parts of this passage from Matthew 25 more than others. It has always felt easier to offer food or clothing, or at least the resources to purchase those things, than to care for the sick or visit those in prison. I figured other people are more skilled in those areas, so I would leave that work to them. But then I moved to Tucson, Arizona and was invited to visit immigrants in a detention center just up the road. So three years ago on a hot, dusty June morning, I arrived at Eloy Detention Center, an Immigration and Customs Enforcement (ICE) facility, privately owned and operated by Corrections Corporation of America/CoreCivic.

After being buzzed through two layers of chain-link fence covered with barbed wire and passing through the metal detector and two more security doors, I entered the stark, cold visitation room. Individuals in jumpsuits were slowly being brought in and directed to different parts of the room. Visitors would sit on one side of the rows of hard mini-couches, and those being detained, on the other side. Then we would begin to talk.

My training and experience as a pastor helped me to have some clue as to how to start these conversations, but it still felt awkward. I knew very little about how folks wound up there, and how they survived the isolation they began to describe. I did not yet know that many of the people I would visit over the next few years were asylum seekers, fleeing war-torn countries, often with their babies on their backs, desperately in need of safety and security. I did not know they could get stuck in that place for months or even years while they fought their cases. There was so much I didn’t know that first day.

But I quickly learned that facts, while important, were not necessary for these encounters. An open heart and ears that really listened were, however. People began to trust me with their stories. I heard about moments and situations they had worked to overcome, and the things that kept them moving forward. I began to see beyond the barbed wire and jumpsuits, and to see these folks as friends and conversation partners, not as criminals – the labels the guards and ICE agents wanted me to latch onto. They wanted me to see them as less-than.

The women and men from around the world who have left their communities of origin and find themselves detained in Eloy Detention Center have taught me so much. They lean on one another. They encourage each other. They see themselves as connected. They listen when others cry at the thought of surviving one more day in a place where the isolation is designed to break them. Because in this place, idleness is not discouraged, but rather imposed. Programmed activities are few. Craft supplies are rationed. The optional jobs on offer pay only $1 per day. But faint hearts are strengthened through the support of others. Hope can be restored. Creativity emerges. Intricately-made swans come to life from just a few strips of paper. Strong purses are woven with colorful checkered patterns. Food items from the commissary are combined to recreate enchilada recipes that remind them of home. Praise songs float around the dusty outdoor recreation space and high into heaven. These acts of resilience remind me that the human spirit is stronger than our broken immigration system.

Matthew 25 emphasizes that when we visit someone in prison, we are visiting Jesus. And like all encounters with Jesus, we risk being transformed. I have been moved to tears by the stories I have heard, but I have also been pushed to put my compassion into action. I have been urged not to fall into the trap of deciding who is worthy of my care and attention, and who is not. Our current culture seems to suggest that if one is labeled “criminal” or “animal” or “undocumented” or anything else that begins to strip someone of their humanity, we are let off the hook, as if we no longer have to care about people who are kept behind lock and key and meters and meters of barbed wire.

But Matthew 25 tells us otherwise.

Elizabeth Smith has been a part of the Tucson, Arizona-based Casa Mariposa Detention Visitation Program since 2015. The program seeks to break the isolation felt by immigrants being detained for months or years at Eloy Detention Center by providing regular visits, letters and money for phone calls and books. The program also offers post-detention support alongside community partners. Elizabeth's heart has been transformed by this work and the strong individuals she's met at Eloy. Several of them have become dear friends.

In addition to her work with the visitation program, Elizabeth is an ordained minister in the Presbyterian Church (USA), currently serving at The Holy Way Presbyterian Church. She is married to Bart Smith (also a pastor), and they love hiking and exploring the desert, and being the proud parents of a dog named Gumby.

Until You Know That I Know-And You Are Okay with That: Pastoral Confidence-...

I’m Done Waiting on You
Scroll to top