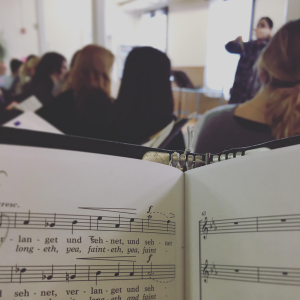 When I was growing up, my parents thought it was so important that their children learn to sing in a choir that we went to two churches. My Dad pastored a small congregation with decent music, but limited choral opportunities for children. And so, one or two weeks a month, we’d go to the 8:00 am service at our own church, and then scramble out to the car with my Mom, and hurry to the “big city” ten miles away to sing in the Treble choir at an Episcopal Church.

I was hooked. I do not sing solos: it’s singing as a group that thrills me. I went on to sing in an excellent high school choir, and then chose a college that just happened to have one of the best choral programs in the country. Even though I was never in any way a candidate for the premiere choir at that institution, I sang all four years of college, and continued to sing in my seminary choir. But, when I became a pastor, I figured that was likely the end of my choral singing. Aside from the occasional pinch-hit, I knew that very few pastors have time to join the church choir.

Then a few years ago, I followed my husband’s job across the country, and found myself in a new city with no church job. A few months after the move, I met up with a college friend who was living in the same city. He had recently founded a choir, devoted to singing a broad range of musical genres, from various traditions and cultures. It was, he said, the nicest group of people he’d ever sung with, and unusually diverse for a choral group. “You should sing with us,” he said. I no longer had church schedules as an excuse, only my incredible fear of auditions. My husband pointed out that my fear of auditioning for someone I’d known since I was a teenager was silly. And that was that: I am once again a voice in a choir, and Wednesday nights are now a sacred time when I stand together with 45 other people and our breathing makes music together.

I’ve been in that choir for nearly five years now, and it has become so important to me that I now serve on its board of directors. Standing in a room with 45 people and breathing together for a couple hours every week means that we are almost as much an organism together as we are a community. I have held onto others, and been held myself, when we burst into tears at the moment when a piece of music intersects with our lives. We are there for each other during life changes: I went through one concert cycle green with pregnancy nausea and lightheadedness, the people next to me on the risers keeping a sharp eye and a strong arm ready in case I started to fall. And we celebrate: there is nothing like your choir singing a full throated “Happy Birthday” to you, or surprising you with a cake to celebrate a life moment. My choir is my “people” in this place where I now live, as much–if not more so–than the church I attend.

I’m nearing the point in my family’s life when I will likely be going back to church work again. And as I do, I’ve begun thinking about whether I will keep singing. But I realized it’s not a question of whether I will keep singing or not. I cannot imagine leaving my choir. And if a ministry call would take me somewhere else, one of my first goals upon moving would be to find another choir.

I look back and regret that I didn’t have the courage to say this to a church before, because I think this is true for all pastors: I need to have a community beyond my church. I need to have a few hours a week when I join together with people to whom I am not the minister, but simply another one of the second sopranos.

At the end of the day, I am a better pastor because I spend time each week using my voice with other people. How can I keep from singing?

Erica Schemper is a Presbyterian minister in the San Francisco Bay Area. She spends most of her time keeping up with her three kids, with occasional breaks to run, knit, sing, and write.

Ripples of Love
Scroll to top