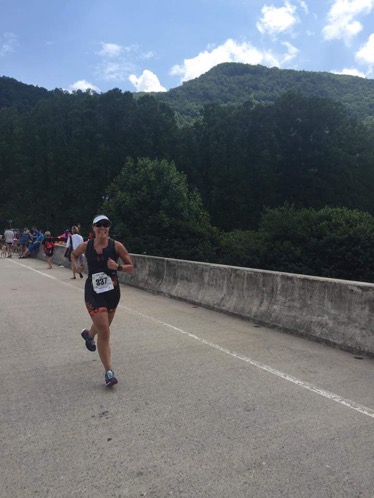 The author competing in a triathlon.

On Saturday, I stood on the second step of a podium, hands thrust high in the air for winning second place in my age group in a local triathlon. On Sunday, I stood behind a pulpit preaching the gospel and then behind the altar to celebrate the Eucharist, my calves sore and the remnants of my race number peeling off my upper arm. I am an Episcopal priest who competes in triathlons. I am a triathlete who is also an Episcopal priest.

On Saturday, while I was standing on the pool deck in skin-tight spandex clothing, waiting for the race to start, I was talking to a friend and some other competitors. The woman near me remarked, “You look familiar. I think I know you. Where do you go to church?” I didn’t recognize her at all, so I asked, “Well, are you Episcopalian?” She gasped and said, “You’re that priest! My father-in-law is your organist.” She has attended Christmas services at my church, seen me sing “Silent Night” by candlelight, and now we are competing against one another. The look in her eyes was something between confusion and awe. Instantly, I felt awkward and exposed, my true identity revealed, like someone telling Superman, “I know you; you’re Clark Kent!” In that moment, wearing a swim cap and goggles, pre-race adrenaline pumping through my veins, my age scrawled in Sharpie on my left calf, I didn’t feel like a priest; I felt like a triathlete, like a competitor. I noticed that the woman was in my age group, and I decided that I wanted to beat her. I wanted to prove that I’m serious about competing, that I’m not just going to play nice and let other people win because I’m clergy. I passed her in the swim and didn’t see her again until she crossed the finish line a few minutes after I did. She saw me waiting for other friends, lined up along the finish chute as she picked up her medal, and I congratulated her on her race. “Wow, you’re fast,” she told me.

For a while, I tried to keep my athlete persona separate from my priest persona. They were discrete parts of my life with different requirements and peer groups. I harbored guilt about the time I spent running, cycling, and swimming when other clergy bemoaned their long hours. I did not want my athlete friends to feel uncomfortable around me once they discovered I was clergy—as if they couldn’t let a four-letter word fly when climbing a tough hill or engage in discussions about bodily functions like athletes often do. Sometimes I ducked invitations for Sunday morning events by simply stating that I usually worked on Sundays. I didn’t hide my vocation, but neither did I broadcast it.

Over time, I’ve integrated the two more and more – athlete and priest, priest and athlete – though there are still moments like that pre-race encounter on the pool deck when I feel I can’t possibly be both: that a good priest wouldn’t be caught in spandex, internally promising to destroy her competition or that a serious athlete wouldn’t take a rain check on Sunday morning events. Many people I meet in my athletic pursuits have never really known a minister outside of the church, as a person with hobbies and interests, let alone a minister who is also a young woman. Out in the world, I am pastor and chaplain, an evangelist of Christ’s love for the world merely by my engagement in it.

In spite of the difficulties balancing being clergy and an athlete, the elements of athleticism – pursuing goals, pushing myself to the limit, and setting aside time to care for my body and soul – have made me a better priest and pastor. When I set a personal record in a race, when I go farther and faster than I’ve gone before, or when I compete in a meet in spite of my fears of failure and embarrassment, it gives me confidence that I can do hard things. Preaching a difficult sermon, confronting a bully, and walking into a fraught pastoral situation are easier because I am intimately familiar with my racing heart and my sweaty palms, and I know how to calm myself and get to work.

Before I started at the parish where I currently serve, I had registered for what would be my second marathon: the Marine Corps Marathon in Washington, DC. A couple months into my tenure, I informed the congregation that I would be missing a Sunday, fully expecting some backlash. Instead, I received support and amazement, and when I came back, several people wanted a detailed race report. Those who follow me on Facebook frequently ask about my races or long workouts. Four years later, my parishioners tell me that they love bragging about their priest who runs marathons, and now we have a church team for the local charity 5K run/walk.

Most importantly, though, swimming, cycling, and running are my paths to rediscovering joy; they’re how I get to play. Chatty miles with friends, the beautiful rolling hills of rural middle Tennessee dotted with cows and horses, and the steady laps in the pool quiet my mind and restore my heart. Even on nerve-wracking race days, I am grateful for the opportunity to strengthen my body and test its limits. And I give thanks for the resources (time, money, and a safe space for recreation) that allow me to run, bike, and swim.

My transformation into an athlete (a noun I still have difficulty claiming) also gave me a renewed appreciation for the athletic metaphors in Scripture. Paul writes in 1 Corinthians 9, “Do you not know that in a race the runners all compete, but only one receives the prize? Run in such a way that you may win it. Athletes exercise self-control in all things; they do it to receive a perishable garland, but we an imperishable one. So I do not run aimlessly, nor do I box as though beating the air; but I punish my body and enslave it, so that after proclaiming to others I myself should not be disqualified.” Day after day, week after week, I eat foods that fuel my body well and attempt to balance the stress of training (and the rest of life) with recovery and sleep so that I can perform my best. I may not receive that perishable garland, but that same structure, discipline, and reliance on community transfer to my spiritual and moral life, my pursuit of an imperishable garland.

When my collar comes off and my running shoes or bike helmet or swim goggles go on, I am still a priest. But most importantly, I’m a disciple of Christ, running whatever race is set before me.

The Reverend Kira M. Austin-Young is an Episcopal priest. She received her Masters of Divinity degree from Vanderbilt Divinity School, and resides in Nashville, Tennessee.

Why we don’t always feel like talking about race (and what to do about it...

All Inclusive (a top ten list)
Scroll to top