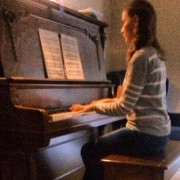 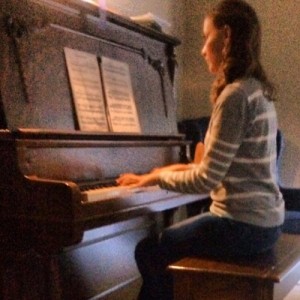 Above: the author at her piano

I sat in the blue Queen Anne’s chair (not mine) in the formal living room (not mine) of the parsonage (not mine, of course) and watched, nervously, as he took the cover off the grand upright piano (mine). He had a case of ancient-looking tools behind him on the bench, a cell phone in his back pocket. He opened the lid of the piano and removed the upper panel. He ran his fingers, unmindful, through the thick dust on the wood as he reached to touch the pin block where a name and number were still engraved.

“You can look up the serial number if you want. See how old she is.”

I took a worn book from him and looked up the maker, Mendelssohn, and the serial number. The book tells me this instrument was manufactured in 1909. My piano is 105 years old this year.  It’s been with me for twenty-three of those years.

My grandmother played piano. When we kids were little she taught us “Mary Had a Little Lamb.” I played the melody while she played chords underneath it. We played on her Winter console piano, the key edges gnawed off by the teething children of multiple generations. I thought it was magic, the way those keys made so much sound. One day my dad asked me if I might like to play piano like Granny. I said yes.

Dad bought this piano for a hundred dollars when I was in the second grade. It was beat up with multiple layers of paint, its own keys damaged. It came to live in our garage while Dad took it apart, piece by piece. He repaired what he could, replaced what he couldn’t, sanded down the wood, stained it all again, and put it back together. I don’t know how many man hours went into that piano, but I still remember the smell of varnish and the sound of the evening conversations between my dad and the man he called to consult about pianos and how to fix them. Before too long, I was taking lessons and learning to play. Like Granny.

Through the years, I had six piano teachers, countless lessons, seasonal recitals, many competitions, hours of practice, frustration, joy, careful work…and one beautiful faithful piano. It stayed at my parents’ house when I went to live in a dorm room at college. I played many pianos in the practice rooms at Birmingham-Southern College, but “home” was always that old grand upright. On visits to my parents’ house I gravitated toward the instrument in the corner. Sometimes I’d practice, then stop playing and stare at the dark wood before my eyes, my feet kicking lightly at the bottom panel, just as they had when I was a kid.

Though I majored in music, I was feeling a tug toward sacramental ministry. So after college I moved to seminary, and my piano stayed in Alabama. I moved to my first church, then another state, then my second church. With each move I left behind friends and made new ones, left behind old worlds and learned new ones. Yet no matter where I lived or who I left, I came home to visit Mom and Dad and my sisters…and that piano. How many times had I sat on that bench and kicked my feet against the bottom panel, hearing the echoes of space, the potential of sound, inside? How many times had I been comforted with that familiar seat, that dark wood—unchanging, the old friend that was my piano, still there?

When I moved to my third call, I was compensated with a large parsonage. I was determined, this time, to move my piano with me. It was expensive and difficult to get such a heavy, unwieldy piece of furniture up to a second-story living room. It took four young men and some luck on a rainy day, but here it was, before me: my dear piano. And the piano tuner.

I handed the book back and watched as he jiggled pins and tapped the soundboard.

“It’s very old,” he said.  And I listened as I do when a doctor shares a loved one’s diagnosis.  “But it’s a good piano. Amazing shape, considering the age.”

He explained that some things simply could not be fixed, that wood is wood and it decays over time. He explained that even the metal wears and becomes loose, that eventually what is now only a little flat will be completely without sound. I felt as if he were telling me how many years the piano had left to live because, of course, he was.

Some objects are just objects. But others are (or become) important friends. I don’t know what lives my piano was a part of before it came to me, but I remember the life that I poured into it: the curiosity and boredom (by turns) I shared with it during practice hours as a child, the emotion and turmoil I felt I could only express through its sustained sounds as a teenager, the discipline and determination I worked into it as a young adult. Now, after the piano tuner left, I sat on the bench once more. A new church. A new home. A chair and a living room and a house (not mine) and an old piano (mine). My beloved, faithful friend.

Keep Calm and Carry on with Hope
Scroll to top