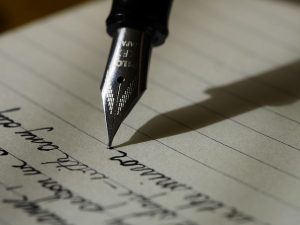 The first time I met you was a very memorable occasion. I’d met celebrities of your stature before, but they’d all been a meet-and-greet sort of thing or strictly business—the kind of official interactions where it didn’t matter at all who I was. Honestly, I haven’t liked many of them. So when I saw you, at the end of a long day that had started twelve hours before, I wasn’t exactly giddy. You were there, at church, with your kids, having just moved into the neighborhood a few months before. You were looking for an Episcopal church with kids’ programs, because apparently not everyone in Hollywood is either atheist or crazy, right-wing, born-again Christian. I found that hopeful. You were also there on the most somber of holy days: Ash Wednesday, that day when we smear ashes on our foreheads with the reminder that we are dust, and to dust we shall return. I thought, “Good Lord, what an introduction. Welcome to our church. Remember, you’re all going to die.”

I talked to your kids about Sunday School, about how long the class is and what they’d learn. I couldn’t believe I was having this conversation, that you had entered my world. I’ve entered into your world—worlds you’ve created—many times. I’ve loved everything I’ve seen you in. You’re really one of my favorites. And there I was, talking to you in real life, like you’re regular folk. I mean, of course you are a person like anyone else, but let’s be honest, in many ways you’re not. You and I live in the same neighborhood but not in the same world. Yet there you were, in this church, on my turf, interested in things that are my responsibility. All I could think was, “I really hope I don’t make an idiot of myself.” I’m pretty sure I did, even though I was trying very hard to act normally and not geek out. Most importantly, I was trying to make it about the kids, because that’s why you were there. You were not there as a famous actress. You were there as a mom, and I wanted so much to make sure that’s how I treated you. I’m sorry I let it slip that I was a huge fan of your hit show while your son was talking about being friends with your co-star. It was a natural segue, but I hope it wasn’t unprofessional.

None of that is why your first visit was memorable, though. You see, that day was Susanna Perez’ birthday. Susanna had died almost two years prior. At the same time that I was talking to your kids about Sunday School, her sweet, devoted husband Dave was sitting in front of her columbarium niche, where her ashes are buried, talking to her. Dave came and talked to Susanna often. He missed her in such a way that you could see broken pieces of his heart in his eyes. It made you want to pick them up and put them back together and hold them forever, just so you wouldn’t have to see him endure such pain ever again. On this particular day, it was a small miracle to see Dave there, because he had just gotten out of the hospital, having briefly been close to death himself.

Your kids and I wrapped up our conversation, and the service started. At some point, Dave came in, too. When it came time for the imposition of ashes, you came forward and bowed your head. I placed my thumb on your forehead and drew a cross there, saying, “Remember you are dust, and to dust you shall return.” It was surreal telling you, this luminous being whom most people only see on screens or magazine covers, “Hey, you’re going to die, just like the rest of us.” Just like Susanna did. It was ritualistic, and in a way it was lovely, but only because we both knew your death wasn’t impending.

Then, my heart sank. Right behind you in line was Dave. 92-year-old Dave, whose heart would always be a little broken at Susanna’s loss, who on this Ash Wednesday had just been sitting beside her ashes, and who had come so close to being ashes himself only a few weeks prior to that. He stepped forward, and my voice shook as I placed my thumb on his forehead and said the words. This time, they felt more like a warning that was all too real. It was a reminder that this is the stuff of life: There are great joys, and great losses. There is enormous success, abundant mediocrity, and drastic failure. There are children, and there are octogenarians. There is loneliness, and there is hope. There is life, and there is death. The thing I love most about church is that it’s the only place where all of that is held together in the same hands, woven into the same fabric.

We buried Dave today. He actually died a few weeks ago, on my birthday. I don’t cry much, but I couldn’t stop the tears flowing down my face as I helped his daughter place his ashes into the niche, right underneath Susanna’s. She said through her tears, “Go be with Mom now, Dad.” As the funeral ended, a message from your nanny was waiting for me. You needed something from the church, and I said I’d bring it by your apartment. I hope you didn’t think me rude for just leaving it with the doorman, but my heavy heart wasn’t ready to perk up and greet people who hadn’t just come from a funeral.

You’re much more to me than a celebrity now. You and your kids are part of my flock, and in a way, we have become friends. We’ve gotten to know each other over the past couple of years. We’ve had some rich conversations about serious theological and existential questions. I hope you know that’s the stuff priests live for (or at least, that I live for), and I also hope we’ll have a lot more conversations in the years to come. But today, as I walked out of your apartment building, I remembered the day I met you as one of the more profound experiences of my ministry. It was a day when the eschatological shit hit the fan, when the reality of death as a part of life stood right in front of me, as I smeared ashes on it and reminded it that this isn’t the end, but part of an ongoing circle. There is death, and there is life. There is grief, and there is joy. This is why I am a priest: to help people place all of life’s happiness and sorrow on hallowed ground, together. To put it all in God’s hands—all of it—in one messy but beautiful pile.

Julie Hoplamazian is an Episcopal priest serving in Brooklyn, New York. When she's not dutifully writing sermons, she can be found at the barre teaching adult beginner ballet, out in the neighborhood walking her dog, or trying to catch up with her Netflix queue.

My Colleague, My Mom