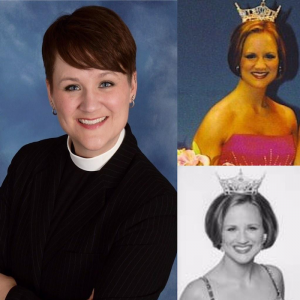 We all joke about what we didn’t learn in seminary, but in my case, plenty of people joke about what I did learn. While I was in seminary, I learned how to walk in 4 ¼ inch heels, apply false eyelashes, pick a flattering lipstick color, spray adhesive to my rear so my bikini bottom didn’t ride up, sing an aria, and institute world peace.

The summer before my second year at Luther Seminary in St. Paul, I competed for and won the title of Miss Minnesota. I had to ask my professors if I could miss the first month of class for the following semester so that I could compete for the title of Miss America. The night of the pageant, my classmates gathered in a classroom to watch me introduce myself and then promptly get cut from the competition. But don’t worry – Miss California was also a seminary student, and she made the top five.

People seem very confused when I tell them about this other part of my life. No, I didn’t compete in those weird child beauty pageants. No, I never dreamed of being at Miss America. No, I don’t have any fashion sense. But more than that, people seem to have a hard time reconciling parish pastor and pageant princess. Honestly, I have always thought the two go together perfectly, and not just to justify my side gig.

My joke has been that they’re basically the same except for the clothing, but I’m not sure I can use that line any more. Both jobs involve archaic, specialized garments found only in particular shops and maximized for visibility. I mean, no one really wears an evening gown outside of a red carpet or black-tie gala. But then, no one wears an alb or chasuble or cope…well, anywhere, really. The two wardrobes don’t cross over, but they still have a lot in common in their singularity and expense.

After that we can talk about the real similarities. No matter what you might think about pageants, it is through that world that I met some of the most hard-working, intelligent, faithful, ambitious, talented, and idealistic women in the world. I only ever competed in eight pageants in my life and I won fewer than half of them. It wasn’t the winning that kept me going. It was the people. I found joy not only in the inspirationally-driven contestants, but also in the droves of volunteers backing them up. In the same way that the good, wise, loving people of God lift me up in my congregation, so, too, do pageant girls buoy my heart and soul to this day.

Words drew me into ministry. Preaching, leading liturgy, singing hymns, discussing scripture – all these words filled me up. I honed those skills in pageantry. Did you know that one of the largest chunks of your score comes from a 10-minute face-to-face interview with a panel of judges considered to be experts in their respective fields? (For that matter, did you know that the largest portion of your score comes from talent? Don’t worry if I can sing the liturgy or not, because I can sing opera. In heels.) But no interview has ever thrown me since then. Not only am I good with words, but I like having fun with them, and both pageants and ministry let me do that.

But pageants are not just about showing off how smart and pretty you are. There must be substance. Look, I’m aware of the stereotype: a ditzy, superficial girl learns to play into society’s expectations of her appearance and puts on the show of being verbal when really, she’s vapid.

I never, ever met that kind of contestant. Instead, I met women who had started non-profits, raised thousands of dollars for incredible causes, lobbied their government, and passionately wanted their communities to be better places. Through the personal platform, each contestant advocates for a cause dear to her. Music education, autism awareness, ending sex trafficking, curing juvenile arthritis, and helping kids stay safe gives you just the briefest idea of the incredible work these women do. They care. They love their neighbor. Where have I heard that before?

When people tell me that being in pageants isn’t a thing they think a pastor would do, I can smile and explain how the two worlds really work together. This keeps me from being a bit snippy about it. Because the implicit message is that God might not call girls who are pretty, who like fashion, who are into sparkles, or who otherwise exhibit strong feminine traits. Basically, they’re saying pageants are a girl thing and girl things don’t belong in ministry. And I know that’s not really what people are saying, and that I’m a little defensive of this weird, wonderful world in which I still exist, but honestly, it kind of is what they’re saying.

So I will keep talking about it. I will keep telling stories about it. I will keep convincing people that pageant life was some of the best pastoral prep I ever got. (You want to talk about the alligators trying to drag you down? You should read a pageant message board.) I know that the relationships I built, the work I did, and the self I nurtured were good and of God.

In many ways, a lot of what makes me a good pastor got honed by being a state titleholder. I grew confident in my speaking abilities. I learned how to engage nearly anyone in conversation. I managed to live on four hours of sleep. I discovered how important appearances are, and how to use that for the powers of good. I found those places that needed my help and those people who most needed a neighbor.

While the modified schedule I needed to be Miss Minnesota for a year ultimately resulted in me graduating from seminary a semester late, it was worth it. Being in pageants helped me be the pastor God has called me to be.

Plus, if you ever need someone to teach you about false eyelashes, I’m your girl.

Megan is a pastor at Augustana Lutheran Church in West St Paul, Minnesota, and has contributed to magazines like Gather and books like Crazy Talk. She continues to volunteer in the Miss Minnesota pageant system. She also loves camping and cheeseburgers because she loves to be contrary.