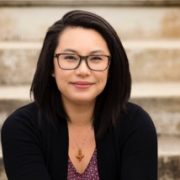 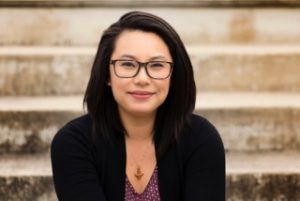 It was on the way to pick up the kids from school.

I slowed to a stop at the crosswalk that connects a paved walking trail with a rails-to-trails path on a fairly busy street in Bloomington. I had seen the bicyclist slow down to wait to cross, but even though I was in a hurry, I waved him on anyway. My eyes flicked up to my rearview mirror, and I noticed the car behind me abruptly stop, like the driver hadn’t been paying attention. Maybe he didn’t expect me to stop for the lone person waiting to cross the street. Maybe he was on his phone. Maybe he was in a hurry to pick up his kids.

When I drove further down the road, the lanes opened up, and I got in the left-turn lane. That’s when I noticed the same car behind me come up and zip around even before the lanes split off. As I turned to watch him drive by, he slowed down a little with his driver’s window down and screamed out:

Bitch, learn how to drive or go back to your country.

Then he sped through the intersection. I missed my chance to turn left as I watched him drive away, my knuckles turning white from gripping the steering wheel. I couldn’t help but immediately default to thinking: Was I not supposed to stop for the bicyclist? Did I do something wrong? Am I a bad driver? END_OF_DOCUMENT_TOKEN_TO_BE_REPLACED