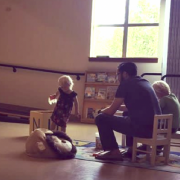 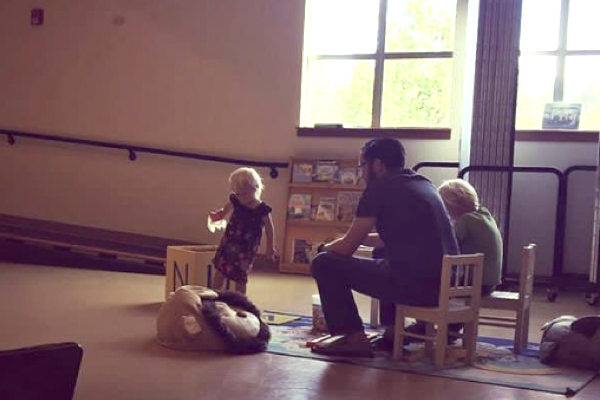 Learning about worship in the pray ground

Last weekend, I posted a picture on instagram of my husband with our two youngest children, playing in the child-friendly “prayground” space at my sister in law’s church. (Shout out to Shepherd of the Valley for general awesomeness.)

I snapped the picture because the light was good, and, in the interest of truth telling, I find my husband doing his amazing work of parenting really sexy, so I wanted a pictorial record of the moment.

I also mentioned that the play space in the sanctuary is a hill I’m willing to die on in future pastoral positions. (Take note, search committees of the future who may be reading my blog posts: if this sounds like a bad idea to you, we’re probably not a good fit.)

The photo was a hit with friends and several have asked me for my input on these sorts of spaces.

Here’s the thing: I can mostly comment as a parent of three kids who has spent a good deal of time sitting in the pews with my kids in last 6 years. Though, I bring a bit of expertise since I happen to have background and training in church ministry with children and families.

But, I have yet to successfully pull off the concept of kids truly having their own space to play in the church, particularly in a place that is sort of up close to the front and visible.

Had I been in full time ministry for the last few years, leaving the Sunday morning pew parenting solely in the (more than capable) hands of my husband, I honestly do not think I would be as adamant about the need for these spaces. I didn’t fully realize, in my first five years of parenting, how difficult it is to parent kids in a way allows them participate and be present in the faith community, because I was up front leading worship, or in the back greasing the gears of programmatic ministry: my husband was the one doing the hard work in the pews.

There are churches that have been doing things to encourage children’s presence in worship for years, and even some that have done so in similar ways to the prayground. As far as I can tell, the prayground concept came to full fruition (or at least got national attention) under the leadership of the Reverend Andrea Roske-Metcalfe, who pastors at Grace Lutheran Church in Apple Valley, MN. Last year, she told fellow members of Young Clergy Women International (at that time, the organization was called the Young Clergy Women Project) that she was developing this space in her sanctuary where kids could play during worship. She asked for help in brainstorming names. Someone suggested “prayground.” Andrea ran with it, got it running in her church, and it was soon featured in an ABC news segment.

Other churches have adopted the concept and the name, including my sister-in-law’s congregation.

To me, the things that qualify something as this prayground concept are: END_OF_DOCUMENT_TOKEN_TO_BE_REPLACED