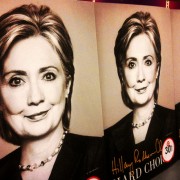 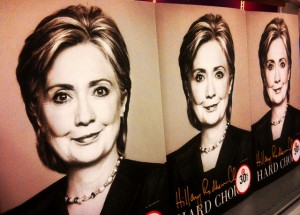 My early morning running buddy and I, both of us committed Democrats, have an ongoing dialogue about Hillary Clinton as a presidential candidate: she is adamant that Hillary is the best choice for the Democrats in 2016. I’ve always countered with, “I don’t know. There’s something dynastic about it: it feels un-American to me for a family to have two shots at the White House.” We’ve been able to get a good half-mile out of this conversation several times in the past couple of years.

So, when Hillary Clinton finally announced her candidacy in April, I was surprised by my reaction to the news: I really want Hillary to win this one. The fact that my daughters will grow up regularly seeing women (me and others as well) as religious leaders brings tears to my eyes. I’m ready to feel that way about a woman president, even if she may have gotten a boost from a small dynasty, because sometimes justice begins with factors that level the playing field.

I was among the first 25 women ordained to ministry in the small Reformed denomination I grew up in. I graduated from seminary with a class of 55 M.Div students, only five of whom were female. We were still healing from three decades of fighting over women’s ordination. Occasionally, we were still fighting. Most of my professors and classmates were supportive. But there were times when it was a very hard place to be a woman. And through the whole process of education and call and ordination, my female colleagues and I had to take our advantages where we could find them.

Many of us were given scholarships by a group that had been pushing for women’s ordination. We often came back from weekend preaching assignments to report to each other that we had been the first female to step into the pulpit in a particular congregation. And when we were ready to look for church calls, we had to read between the lines to figure out which few congregations were truly open to considering women.

A good number of us were pastor’s daughters. I kept my maiden name when I got married a few months before I started seminary for a number of reasons, one of them professional. If I kept my last name, I would be the third “Rev. Schemper” in the denomination. And while my father is among the more liberal ministers in his generation, my grandfather was widely respected in more conservative circles. I figured it couldn’t hurt, if I was ever in a sticky church-polity match up between liberals and conservatives, to have the name as a reminder that “Reverend Schemper” was my grandfather.

The church where I did my first internship received grant money on the condition that they accept a female intern. There were several of us who spent a summer pastoring this tiny church that could never have afforded an intern, but the fact that the church was granted money was kept quiet because it looked unseemly.

A few of my friends were able to ease into a first call because their also-clergy-husband took a co-pastoring position with them, and it was perhaps just a little easier for a church to call its first woman-pastor when they were also calling her husband.

Sometimes I wondered if it was unseemly to take these advantages. Shouldn’t I just be breaking ground on my own merits? But there were plenty of obstacles, and to be honest, I was perfectly willing to grasp onto a few coattails if it meant an easier ride into the call to ministry. However, if anyone had suggested to me that any of my female classmates were making it through the ordination process only by working these so-called advantages, I would absolutely bristle. They were strong preachers, had wonderful pastoral care skills, could mediate their way through difficult conversations, and were so certain of their sense of call (you wouldn’t put yourself through this if you weren’t). I couldn’t be prouder to be part of such an amazing cohort of strong women.

And this is what I’m coming to understand about HIllary Clinton. It would be dishonest to claim that she doesn’t gain advantages from having been first lady. But even with that boost, whether you agree with her politics or not, there’s no doubt that she has qualifications and accomplishments that are all her own.

Sometimes, as women who are breaking ground, we do ride a few coattails. But it shouldn’t diminish who we are and the validity of what we are called to do. I’ve extended that grace to myself when I think about my own path to ministry, and I’m ready to extend it to Hillary as well.

Erica Schemper is a PC(USA) pastor serving an ELCA congregation in the San Francisco Bay Area.