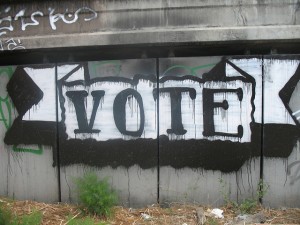 Are you an American citizen of voting age? Good. We need to talk. We’re in the thick of primary season, and have months to go before November. In my capacity as an “official religious person,” I sometimes feel the need to speak into the raucous echo-chamber of conversation that social media has become. If you’re like me, often you shut off the yelling and therapeutically eat cookies as a way to stave off growing despair over the state of American politics. But put down your cookies (or beer, or night cheese) and listen. Despair doesn’t help. Neither does apathetic disengagement. Unless you’re an avowed Anabaptist who has deeply held religious convictions about being divested from political process, you’ve got a responsibility to be educated, engaged, and present on voting day. So is this another screed against That-Guy-With-the-Hair or That-One-Lady? Nope. I’m going to roll us back from all of that. I want to talk to you about the underlying foundation of how we approach politics in general.

1. Refuse to Participate in Apocalypticism

Political consequences are real. The expiration of the Federal Assault Weapons ban had deadly impact upon countless families within the United States; the appointment of John Roberts to the position of Chief Supreme Court Justice had a huge impact on the implementation of the Affordable Care Act (also known as Obamacare), and the appointment of Justice Anthony Kennedy eventually affected the outcome of Marriage Equality. It is not wrong to consider cause and effect in regard to who we vote for: presidents appoint Supreme Court justices and members of congress vote in and repeal important laws. But will it be the end of the world if a candidate you don’t like wins? Probably not. Sometimes Supreme Court justices vote in a way that entrenches injustice (think Plessy Vs Ferguson). But the way our government system works also encourages reevaluation (think Brown vs Board of Education). Chicken Little behavior (“The sky is falling!”) does not take seriously the fact that governance and our involvement with it are long-term responsibilities.

2. Refuse to Make Strawmen of People You Disagree With

Remember in the days before Facebook, when you used to get terrible political screeds via email? These emails usually took an extreme point of view on a political or religious issue and then demonized anyone who didn’t agree. Now we do the same thing with memes on social media. While tilting against strawmen makes us feel great (strawmen don’t fight back), we aren’t truly winning anything. Chances are, the person who objects to the legality of abortion doesn’t have a secret women-hating agenda. Chances are, the person who supports gay marriage isn’t trying to undo the fabric of society. People usually spend time thinking about their positions on controversial subjects before they choose a side. Christians, ostensibly, are praying and reading scripture when they seek to live faithfully in this world. Be honest: do you actually know the arguments of folks with whom you disagree? Have you ever calmly and respectfully engaged them to get their perspective? No? Then try it sometime. We may never change each other’s minds, but by listening we have said something significant about the equal dignity and value of our fellow humans.

3. Refuse to Be “One Issue” Voters

Abortion may be vitally important to you when you choose a candidate. Good! Issues of human rights, women’s health, and the intersection of morality and medical care are vital. But do you know your candidate of choice’s thoughts on the criminal justice system? How does your candidate view diplomacy and multi-national peacekeeping operations in connection with our nation’s foreign policy? Does the party you tend to vote for give any thought to our nation’s education system or the over-testing of children? Gas is cheap, and that’s great! Or is it? Do you have confidence that your candidate or your party understands the delicate system of resources that we all depend upon? I understand we all have outrage fatigue as well as compassion fatigue: it’s just not possible to care about all things at the same emotional level. But when we vote, we don’t just vote for a person who will focus on one issue. The people we vote for will, by the nature of their job, affect issues of environmental stewardship, science, war, education, religion, and justice. We are grownups, so we need to have a view beyond just one issue when we make political decisions.

4. Live Consistently in Your Worldview

Your undergirding belief system should influence how you vote. As a progressive Christian, there are certain candidates I just can’t vote for, as their policies and behaviors support government actions I view as antithetical to my faith. I know this to be true for my friends who would identify as Conservative Christians. Whether or not my Christian neighbor and I agree on how to interpret scripture, it would be hypocritical of us to shape our lives around what we understand God’s will to be and then totally default when it comes to politics. If you’re a Jew, if you’re a Christian, if you’re an atheist, if you’re a Buddhist, you should be that in whatever milieu you find yourselves in. We must learn to be consistent in our beliefs and in our actions, or we reveal our worldviews to be flimsy charades we only trot out to win arguments on the internet.

Elizabeth Grasham is the Solo Pastor of Heights Christian Church (Disciples of Christ) in Houston, TX.  She is a mother, a wife, and a geek with very firm opinions on the matter of Star Trek VS Star Wars. Elizabeth blogs at And Yet I Sing.

I Yelled at My Daughter Today

The Church and Sexism: What We Can Do
Scroll to top