I live on the Maine/New Hampshire border. The radio in my bedroom gets better reception from Maine’s NPR affiliate, the one in the kitchen tunes into the New Hampshire station. Which means, recently, that I wake up to Maine’s Governor LePage saying that one of the big concerns of the heroin epidemic is that (black) drug dealers are impregnating (white) women; as I pour my coffee, I hear about the NH state legislator who suggested that women who breastfeed in public should expect to have their breasts and nipples fondled. 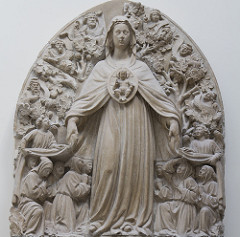 Mornings have been rough around here.

Even without the racially-charged language being used in Maine (horrifying in itself, but a post for another day), these stories have been a constant reminder of the continuing objectification and sexualization of women in our culture. Each morning I am told anew that women are two-dimensional building blocks for the construction of men’s multi-dimensional identities.

It is one thing for me – an educated, privileged woman who spends a lot of time deconstructing patriarchy – to hear this normalized sexism. It is quite another thing for my children, or for the many who grew up on these narratives. Because this narrative goes unchallenged in most cases, and rape culture is alive and well in our society.

In this, as in so many things, I wish I could look to the church for a corrective: to be the counter-cultural insitution that calls us away from modern American society, and towards God’s realm in this world. I wish that the church would hold up the autonomous, prophetic voice of Mary (Luke 1); the understanding and witness of the Samaritan woman at the well (John 4); the courage of the Gentile woman willing to challenge Jesus’ exclusivity (Matthew 15; Mark 7) as counterpoints to the dominant narrative. I wish the church would live into its own powerful and inclusive Gospel message.

But the church has also been built upon the bodies of women, reduced to two dimensions: sex and reproduction, Eve and Mary.

The church routinely tells us that the stories of women don’t matter, except in service to a male-centered narrative. Mary is not a prophet or a disciple in her own right, but a virgin and mother to a son. The Samaritan woman is not an intelligent counterpoint to Nicodemus’ failure to understand; she is a man-chasing slut. The Gentile woman isn’t a good debater who gets Jesus to change his mind, she is a tool in his project to school the (male) disciples.

Sunday mornings are rough, too.

If we are serious about our intent to bring God’s realm on earth, we need to be equally serious about addressing the sexism in our churches. We need to do the painful work of deconstruction – even demolition – so as to build a balanced church upon a multi-dimensional foundation. We need to scrape away the traditions and tear down the theology that makes the stories of men normative and universal, but stories of women specific and individual. We need to be the corrective.

If we are serious about discipleship, we will hear the pain of women’s lived experiences of sexism. We will speak out against abuse in God’s name; against the “cross to bear” narrative that keeps women in life-threatening situations. We will see women as more than their desirability and fecundity, more than the Eve/Mary binary. We will take seriously the micro-aggressions, the uncomfortable “compliments,” the subtle shaming. We will take responsibility, and repent, for our participation in a society that legislates women’s bodies and passes judgment on their sexuality. We will communicate the expectation of bodily autonomy and healthy sexuality for all.

If we are serious about being the church, we will work intentionally to create a counter-culture in which women’s words trump our clothing choices; in which women’s ideas are heard on their own merits without being “mansplained;” in which the pitch of our voices is less important than the power of our preaching. We will create a culture where equal pay for equal work is normative rather than exceptional; where women are equally considered for positions of authority – with adults as well as children! – and have equal access to full-time ministry positions with benefits (a problem even in churches with lower pay gaps).

If we are serious about following Christ, we will seek to imitate the Incarnate Word, for whom equality and equity weren’t women’s issues, but justice issues: God issues. We will heed the modern prophets who dare to tell the uncomfortable truths of systemic sexism within our sacred spaces.

If we are serious, then the church will be our needed corrective, and the loving justice of Christ will accompany us into the world and into the halls of power – in New Hampshire, in Maine, and beyond.

And mornings won’t be so rough anymore.

Eliza Buchakjian-Tweedy is the Pastor and Teacher of First Church Congregational, United Church of Christ, in Rochester, NH since 2012.  Despite trying hard to become an academic, with a focus on politics, law, and social justice, Eliza finally gave in to God's sense of humor in the form of a call to ministry. She now combines her earlier passions with a love of the Gospel, and strives to move herself and her congregation out of the realm of the theoretical and into the practical, hands-on work of discipleship.  She strives as well to get her mostly-white, New England congregation to move to the beat, clapping on one and three. So far the Holy Spirit has given more success with the former than the latter, but she holds out hope. Eliza and her wife have two sons, ages 6 and 4. Follow Eliza on twitter @elizaflemingbt.

Love One Another: Election Edition

The Women Who Make it Possible
Scroll to top