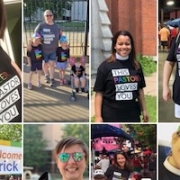 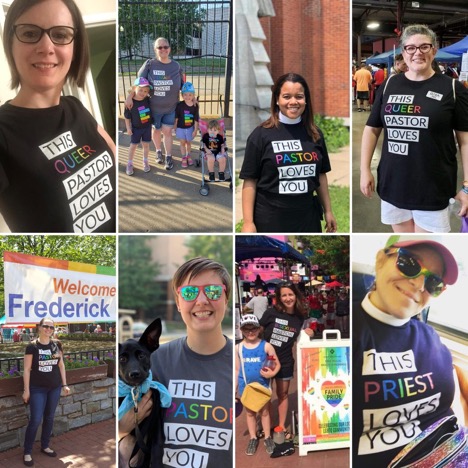 Some of our young clergywomen in their Pride shirts.

Young Clergywomen International created t-shirts for Pride month to reclaim a message of radical love. Board co-chair Sarah Hooker had no idea what kind of response YCWI would receive. She said, “The fact that we’ve sold around 850 versions of the shirt and continue to sell them, and are getting requests constantly for different word choices to print up next year, speaks so much for the need of the Christian community to have clothing that expresses a loving and inclusive message to the LGBTQIA+ community, but also for our clergy siblings who identify within that community to easily express their existence and calling to religious work.” The simple message of clergy loving all people has had a big impact among clergy and at Pride events this month.

I wore mine at my community’s Pride Festival in Frederick, Maryland. An interfaith pride worship service was held before the festival started, and I found myself rushing down the still-quiet street to get there in time. A car slowed down at a light as I crossed the street. I cringed, waiting for a catcall because of my feminine gender performance or vitriol in reference to the rainbow words on my shirt. Instead, someone called, “Thank you! We love your shirt!” After the service when I was walking with some of the youth from my church down to the festival, people stopped and took pictures with me. A clergyperson who shows up in love and affirmation is still too much of a novelty. Later at the festival, I sat at the table for the local United Methodist Reconciling Community and listened to story after story of experiences of discrimination in church and hopes for the future. They thanked us for being there, for disrupting the narrative of hate that has co-opted the church and showing “a more excellent way.”

Mine is not the only story. My social media newsfeeds are filled with clergy colleagues of all ages and gender expressions wearing shirts from YCWI’s Pride Collection. Here are a few of stories from other young clergywomen when they wore their shirts:

And there are even more stories of wearing Pride shirts in everyday life and the holy encounters the shirts facilitated.

The presence of faith leaders who proclaim God’s belovedness for all people makes a difference. As leaders stand up with rainbow shirts and spend time with people at Pride, we are chipping away at a church tradition that wrongfully denied that we are all of us children of God. Leigh Hall said that right now, the world needs to see us wearing this shirt. And she is right.

But Stonewall, remember, was a riot. My experience is that churches can be good at celebrations and welcome but seem to be less interested in living a radical message of love that includes actually taking care of one another and seeking to repent from the harm the Church has caused. For those of us who wear our Pride shirts, especially those of us who are allies or have significant privilege due to our race, marital status, or gender performance, are we repenting and encouraging our congregations to repent? I am a United Methodist, and many of my colleagues heard critiques from LGBTQIA+ folx about our presence at Pride events. Our denomination caused irreperable harm this year at our Special General Conference in St. Louis when delegates voted to solidify stamping out queer folx and allies from the ranks of clergy and also within the pews. The very words United Methodist can be re-traumatizing for clergy who have already been forced out or for people who grew up in the church applying the hateful language of the Book of Discipline to their own self worth. Churches at Pride must commit to true liberation and justice, not just, like the corporate world, about jumping on the rainbow bandwagon.

As we move out of Pride month and continue through the liturgical season of Ordinary Time, our Pride work continues. Trans women of color continue to be murdered at alarming rates. Are we as a church speaking out against that violence and offering bystander trainings? Are we educating our congregations about pronouns and celebrating transitions? Nondiscrimination laws are absent from much of our nation and many of our denominations. Are we advocating for LGBTQIA+ folx in housing and employment? Pride isn’t all rainbows: Pride is about access to human rights and dignity, it is about justice and love.

May these queer, lesbian, bisexual, trans, gay and ally pastors, priests, and deacons continue to share the message of love to all God’s people daily.

Rev. Shannon E. Sullivan is a life-long feminist and United Methodist currently serving the community of Frederick, Maryland, as the associate pastor of Calvary. She is a proud graduate of Drew Theological School in Madison, New Jersey.

She married Aaron Harrington, her high school sweetheart, who is a pilot, aerospace engineer, and general aviation geek. They hope to have children soon after a long, heartbreaking journey, but in the meantime they have filled their home with cats, a boxer puppy, and chickens in addition to mountains of books and airplane parts. When they are able, they travel and enjoy the beauty of God's creation – from National Parks to ancient cathedrals and bustling marketplaces.

Midrash on the Beach

Let’s Be Honest: A Guide to Worship
Scroll to top