Last week, the United Church of Christ announced that their health care plan will include coverage of pregnancy terminations for any reasons. In February, Kaji Douša wrote about her experience of being denied that coverage for a dilation and curettage procedure when she lost a pregnancy. 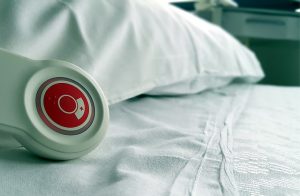 Now I wish that I’d had the “abortion.”

He dropped my hand to run across the room. A pan, anything to catch it, but the blood was coming and the staff was too busy and there was nothing he had, ultimately, but his hands. I know those hands so well. He calls them “bear paws” for the way he claws rather indelicately but with force just so when there’s a knot in my neck or to steady our toddling daughter.

The clods of blood embarrassed me and I apologized out loud, to whom, I’m not sure, since the hospital staff weren’t there. In between episodes, I bent over with a towel or whatever I could find to sop everything up, but in time the bleeding became too much and bending over was unwise and I sat on the bed, causing more mess and I hate mess. Then came the pain with an intensity I hadn’t felt since my beautiful baby girl’s birth. I pushed the button for the preoccupied staff because: PAIN. But no one could come right then and my husband took my hand with his sweet bear paws.

Then the expunging surges my uterus proffered to get this all done began and he dropped my hand to try to go see what he could do between my legs, positioned like a midwife at a birth, checking, catching. I saw him look into his cupped hands at this Nerf football-sized clotted thing that he then carefully set aside, as the staff had asked us to do “for analysis” before they left for the other things.

A few weeks before, we were on the primary care side of the hospital complex, excited to have the ultrasound. There was a pregnancy sack, all of the things that say “pregnant,” a positive pregnancy test, but no heartbeat. The midwife was more shaken about it than I was and I found myself reaching out to comfort her when her voice got shaky. My pain was for later, for my secret space in a room by myself in some time with my God.

Faced with two options, one was cheaper. I am grateful to have health insurance through the Pension Boards of the United Church of Christ, the denomination I serve as a pastor. Our plan had covered our daughter’s simple hospital birth at 100% once our deductible was met. But, as I have known for years, as our insurance representatives reiterate consistently when asked why they do not cover dilation and curettage surgeries: “The United Church of Christ does not cover abortions or other elective procedures.” So our second option would be paid entirely out of our own pockets. My health plan did not prioritize my health. Maybe I did not, either.

In earlier, harder days, in between insurance coverage, I frequented Planned Parenthood for my routine women’s health needs. But those were hard days and I did not want to go back to them. Moreover, I was scared of the idea of an abortion. I have close family members who vote solely on whether or not a candidate supports women’s access to abortions, and I knew that if I went forward with one – even though there was no life in my womb – I would be at extreme odds with their position. I was too afraid to face the kinds of conversations that could ensue if I had that D&C.

So, my husband and I made a non-choice. We decided not to decide and just let the clock tick. We would see what would happen if we did not do anything. Maybe my body would make the choice for us.

I will say that my body tried, it really did. I bled for weeks, depleting the iron I tried to replenish with diet and supplements. I cramped intensely as my body attempted to push everything out. And then, one Saturday morning, it cleared everything out as I hemorrhaged into my husband’s waiting hands. Now I needed more tests, and probably a blood transfusion of Lord knows who’s generous blood given for such a time as this.

Faith leaders like me are, in part, responsible for the ethical dilemma families like mine find ourselves in at times like this. Fearing retaliation from an anti-abortion activist community that has seized the moral floor on this issue for decades now, most of us are silent on abortions, letting other pink-hat wearing feminists and so-called “God-hating” scientists take on the topic for us. Meanwhile, we give our people no context or ethical framework for making decisions about what life is and where to find God when there is no heartbeat.

Here’s what I believe: God is many things, including life and love. And God gave me this life as we faced the death of our hope for this child. God gave me love to share as our midwife stammered. God gave me love in my bed with me as I prayed the words of Psalms like the one Jesus quoted on the Cross: my God, my God, why have you forsaken me? God was in my husband’s heart as he wondered how to say goodbye to a child he would never know. God would have loved us through either of the choices presented to us. God was in the emergency room with the staff who had to care for people other than me. God was in my husband’s hands as he caught a life that was not to be. God breathed life into me in the months it took to get back up.

I have learned not to try to speak for God. But I have also learned to speak up when I see God, and I saw God in all of this. God is in the comfort I receive in sharing my truth despite the hate I will surely face for saying any of this, as The Rev. Amy Butler, my sister in the ministry, experienced in sharing her own abortion story.

Oppressive forces try to keep these kinds of truths quiet. They teach women like me to feel embarrassment for our blood on the floor. They are attempting to legislate away the ability of women like me to have any choice at all in the matter. The truth is that faith leaders like me know better but we have been too scared to do anything about it. Maybe standing with millions of people a few weeks ago at Women’s Marches around the world will give me the strength God was encouraging me to feel all along to say: no more.

Kaji S. Douša is Senior Pastor of the Park Avenue Christian Church in New York City. She is the first woman called to this role in the church's 206 year history, though countless women paved this path ahead of her.

Not What You Meant: The Bible and the Gospel in The Handmaid’s Tale