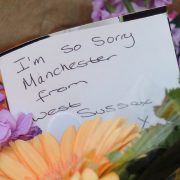 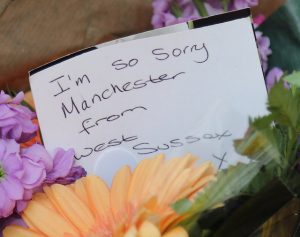 There has been a death in the family. As I write this, less than twenty four hours have passed since the bomb at Ariana Grande’s concert at the Manchester Arena. Twenty-two people have been confirmed dead, and an unknown number of people are injured. Social media is awash with connected stories. How a homeless man cradled a woman as she died. Ariana Grande herself tweeting a sense of feeling broken. Grande is twenty four years old; much of her following consists of young girls and women. Another article suggests that this was an attack specifically targeted at girls and women. There has been a death in the family.

There has been a death in the family. As I write this I am attending the General Assembly of the Church of Scotland. For the Church of Scotland, and for the United Reformed Church, their respective General Assemblies are the highest and final decision making bodies for their denominations. In some respects, for those Churches, it is these Assemblies who are the bishop or the archbishop rather than any individual person. This morning the Assembly received the report and debated the deliverances (this is the term the CoS use for what other bodies would call a motion or a resolution) from their Church and Society Council. The pain of the world was held before us as we reflected on what happened in Manchester along with many other national, U.K., European, and global, social and political issues. I have lived through too many of these tragic events. As I remember other bombs in other cities, in other countries, and on other continents, the creeping feeling of numbness and disbelief that humanity could treat its own so dreadfully touches me yet again. There has been a death in the family.

There has been a death in the family. Much has been written and said about how human communities and how Christian churches deal with death and tragedy. Among the most well known writing about bereavement comes from Elizabeth Kübler-Ross and her theory of five stages of grief. As a Christian minister I have presided over countless funerals where I have proclaimed the Gospel Good News of hope and resurrection trying to enable those left behind to make sense of the gap now present in their family or community. There has been a death in the family.

There has been a death in the family. The question that I am left with, again, is about why this happened? On one level, the answer is simple, someone – and someone that I choose not to hate, or label with insults – walked into the Manchester Arena and detonated an explosive device. The group styled as ‘ISIS’ have claimed responsibility. But where is God? And if there is a God, why do these things happen, and happen to children and young people who had their whole lives ahead of them?

While studying theology at university I was introduced to the biblical genre of lament. END_OF_DOCUMENT_TOKEN_TO_BE_REPLACED