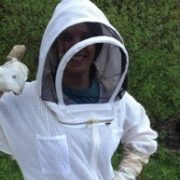 Nothing graces the Christian soul so much as mercy; mercy as shown chiefly towards the poor, that thou mayest treat them as sharers in common with thee in the produce of nature, which brings forth the fruits of the earth for use to all.

One of the earliest moments of me ever captured on film is a photograph of me and my father tending to his bee hives. In the photo, my father (who must have been about the age I am currently) is decked out in his full bee-keeping suit—long leather gloves, netting that covered his whole body, and the all-important beekeeper’s veil— that kept the agitated bees who assume, rightfully, that he was there to take their honey, from stinging him. I, on the other hand, am about three years old, in a light t-shirt, and the only protection I seem to have had is the hand-held smoke pot that kept the bees calm by simulating a forest-fire.

Dad had, no doubt, employed me to work the small bellows on the pot so he could have his hands free to inspect the hive. For my part, I am smiling, apparently oblivious to the danger that my lack of veil put me in. These bees were my friends and I knew no fear. Even the honey they made was called “Hilly-Honey” as a tribute to my fearlessness with them. And though my father could be accused of being reckless with my body’s well-being, he was anything but with my soul’s—teaching me that we kept bees because we are the stewards of this earth and are to care for the least of God’s creatures. Thus began my life as a beekeeper.

To keep bees is to be invited to help build a kingdom.

The keeper and the bees labor side by side tending to the sick, feeding the hungry, building homes, and pollinating the world – an awful lot like being a part of a church. In fact, the link between bees and the church is almost as old as Christendom itself, including everything from theology to candles. At the height of the season there can be upwards of 35,000 bees in a healthy hive and they are all family—mostly all female, in fact. They share the same mother—their monarch, the queen—and their common life together has long been lauded as a model for Christian community. END_OF_DOCUMENT_TOKEN_TO_BE_REPLACED