Nothing graces the Christian soul so much as mercy; mercy as shown chiefly towards the poor, that thou mayest treat them as sharers in common with thee in the produce of nature, which brings forth the fruits of the earth for use to all.

One of the earliest moments of me ever captured on film is a photograph of me and my father tending to his bee hives. In the photo, my father (who must have been about the age I am currently) is decked out in his full bee-keeping suit—long leather gloves, netting that covered his whole body, and the all-important beekeeper’s veil— that kept the agitated bees who assume, rightfully, that he was there to take their honey, from stinging him. I, on the other hand, am about three years old, in a light t-shirt, and the only protection I seem to have had is the hand-held smoke pot that kept the bees calm by simulating a forest-fire.

Dad had, no doubt, employed me to work the small bellows on the pot so he could have his hands free to inspect the hive. For my part, I am smiling, apparently oblivious to the danger that my lack of veil put me in. These bees were my friends and I knew no fear. Even the honey they made was called “Hilly-Honey” as a tribute to my fearlessness with them. And though my father could be accused of being reckless with my body’s well-being, he was anything but with my soul’s—teaching me that we kept bees because we are the stewards of this earth and are to care for the least of God’s creatures. Thus began my life as a beekeeper.

To keep bees is to be invited to help build a kingdom.

The keeper and the bees labor side by side tending to the sick, feeding the hungry, building homes, and pollinating the world – an awful lot like being a part of a church. In fact, the link between bees and the church is almost as old as Christendom itself, including everything from theology to candles. At the height of the season there can be upwards of 35,000 bees in a healthy hive and they are all family—mostly all female, in fact. They share the same mother—their monarch, the queen—and their common life together has long been lauded as a model for Christian community.

It’s easy to see why, as they all work for common good of the hive, and each worker bee is a servant to her fellow sisters and queen even from the moment she is born. As she hatches and crawls out of the comb where she has been fed by her older sisters, she takes her duty as a janitor of the nursery, before becoming a nursemaid herself. In her short forty-day life span, she will have performed every job in the hive—from cleaner and feeder, to builder and architect, to guardian and soldier, to explorer and gatherer. No job is too small or too big in service to the hive.

Except laying brood, that is. Beside the queen, they are all virgins. In fact, their virginity is yet another reason the church liked them so much as a models for holy living. The purity that virgins were alone thought to possess was infused into their by-products, including honey (which does indeed have antibiotic properties and is the only food that will never spoil) and wax (which is why bee’s wax is used for altar candles to this day). Yet, these are no meek and mild virgins, as their venom, drop for drop, is more deadly than a rattlesnake’s, hence the need for the veil—not to shield the virgin on her way to the altar, but to shield the keeper from the virgins!

Bees are champion pollinators and are responsible for one in every three bites of food we eat. At times, they may fly up to six miles to gather nectar, cross-pollinating as they go. My girls (which is the affectionate nickname that most keepers call their bees) have even encouraged me to do this with their message and carry the good news about bees for miles around. 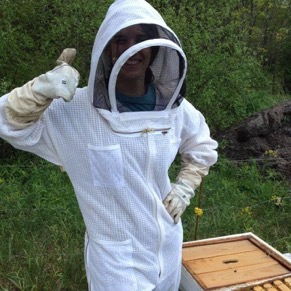 Picture of the author, taken by her father and fellow bee keeper

When I first moved into the Philadelphia suburbs, I was invited to talk about my bees to a garden club. Little did I know that in this part of the world, these “clubs” were the places where some of the most powerful women in the community gathered. My talk was so well received that I was asked to at least six more. Each one offered me the opportunity to invite people to church, which is a form of evangelism that I am now calling “bee-vangelism.” (I apologize for the pun, but beekeepers can’t get enough of them.) I have also been able to use the honey that they produce to raise money for our outreach effort which seems like a “honey” of a deal to me. (One more pun. You’ll live.)

I love being a beekeeper. Theses sisterly, scrappy, sacred little insects have taught me much about the Christian life and I am grateful that I get to step into their world to help build their kingdom. It gives me strength and inspiration to go out and to do the same for God’s peaceable kingdom in the world—veil and all.

Hillary is the rector of St. Christopher’s Episcopal Church in Gladwyne, PA. She holds a BA with honors in Religion and Psychology from Moravian College, a Masters of Divinity from Yale and the Institute of Sacred Music, and a Doctorate in Ministry from Drew University. In addition to her educational background, she has worked on many levels of Episcopal Church ministry, including serving on several Diocesan and National Church committees as well as engaging in ecumenical and inter-faith efforts. She has many and varied hobbies including being a yoga instructor, a musician, skiing, hiking, gardening and bee-keeping. Hillary is married to Ken Raining, a librarian, and together they are the parents of a 9 year old daughter, Delia.

Life at The Table
Scroll to top