Tag Archive for: being Christian every day 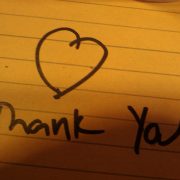 On the way to Jerusalem Jesus was going through the region between Samaria and Galilee. As he entered a village, ten lepers approached him. Keeping their distance, they called out, saying, “Jesus, Master, have mercy on us!” When he saw them, he said to them, “Go and show yourselves to the priests.” And as they went, they were made clean. Then one of them, when he saw that he was healed, turned back, praising God with a loud voice. He prostrated himself at Jesus’ feet and thanked him. And he was a Samaritan. Then Jesus asked, “Were not ten made clean? But the other nine, where are they? Was none of them found to return and give praise to God except this foreigner?” Then he said to him, “Get up and go on your way; your faith has made you well.” ~Luke 17:11-18 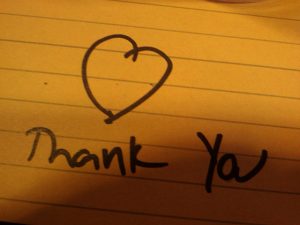 I think a lot about the lepers these days. In my current ministry setting of waiting tables at a restaurant, I am asked for a lot of things every shift. A. Lot. More napkins? Sure. Another Coke? Absolutely. A seventh basket of chips and salsa (yes, seven!)? I’ll be right back. It’s my job to meet these needs the best way I can while doing what is right for the customer. So I grab a clean fork when you drop yours on the floor and remember the lemons and deposit them on the table with a smile. The words I only hear sometimes are “thank you.” I get ignored, I get looked at, people are rude, or stare at their phones not even noticing that someone has just set a plate hot enough to boil water on their table. I would venture to say that about 50% of the time, the people who sit at restaurant tables do not say “thank you” during their entire visit. Which is why it is so noticeable to me when they do.

So I think about the lepers. Especially that last one – the one who took the effort to go back to Jesus after he had received what he desired to say “thank you.” As the text makes clear, the leper is an outsider and one who is very different from Jesus. Which, to me, makes the act even more noticeable. I wonder how Jesus reacted, internally. Did he smile inside? Did he feel a sense of accomplishment? Did he feel valued and noticed? Those emotions are ones that many of us feel when someone says “thank you.” END_OF_DOCUMENT_TOKEN_TO_BE_REPLACED