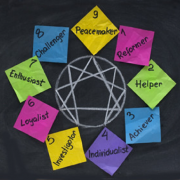 How the Enneagram Shows Up in Ministry:
Perspectives from Nine Young Clergy Women 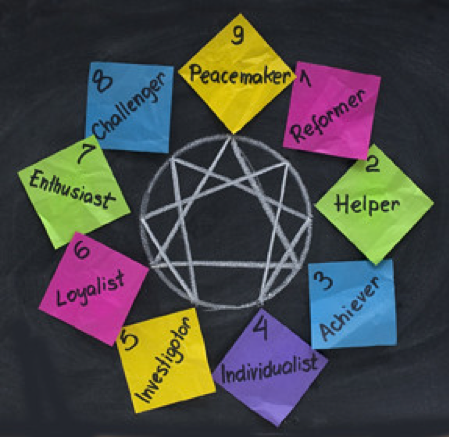 If you spend much time in clergy circles, you’ve probably heard of the Enneagram, a model for understanding the variety of motivations and fears of the human psyche. Its popularity in Christian subculture is due in part to the work of Richard Rohr, Ian Cron, and Suzanne Stabile. Unlike other personality-typing systems, the Enneagram’s focus is less on behavior and more on the desires and motivations that compel behavior. It suggests that there are nine basic structures that the ego takes on to meet its needs. Each type has a core motivation and a core fear that result in particular mental and emotional patterns. As the Enneagram helps name and illuminate these patterns, we are able to make informed choices about how to live authentically. The awareness it brings allows us to access and develop our healthiest selves in order to share the gifts God has given us.

Many young clergy women have found the Enneagram to be a helpful tool in ministry and spiritual growth. One school of Enneagram tradition is called the Narrative Enneagram, pioneered by David Daniels, which bases its teachings on panels of people who share their experience of their type in their own words. In this spirit, we have invited nine young clergy women to share about how their type impacts their ministry and about the wisdom they have gleaned from applying the Enneagram to their experience in professional ministry.

END_OF_DOCUMENT_TOKEN_TO_BE_REPLACED 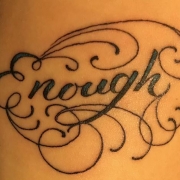 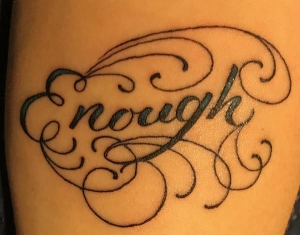 I’ve spent 39 years on this earth without any tattoos. I’m not anti-tattoo, but I couldn’t think of anything that I would, without any doubt, want forever engraved on my skin. For some reason, as I approached my most recent birthday, I suddenly had a desire to celebrate it with permanent ink. In small Hebrew lettering on my upper arm, close to my  heart, I got my two sons’ names, which both came from Hebrew Scripture and hold great meaning. Less than a month later, I was already planning my second tattoo.

This second tattoo was inspired by the gift of a week at CREDO, a program in some denominations for pastors that looks deeply at overall health and wellbeing in five areas: vocational, spiritual, financial, physical, and emotional. From the start, one word kept coming to the fore: Enough. I journeyed with that word for the week in the company of wonderful colleagues, and knew what my next tattoo had to be.

For those familiar with the Enneagram, I am a very solid One – often called The Perfectionist, or as I prefer, The Reformer. Ones are always striving for improvement. We want to make the world a better place. We want to improve what is in our environment. But the strongest focus of that drive for improvement is internal. I’ve always known that I hold others to high standards, but none nearly as high as the expectations that I have for myself. It’s pretty exhausting. Ones are always our own worst critics.

As a One, the word “Enough” was the word on which I needed to meditate. What would it look like for what I have done to be enough? For me to be enough? When do I know that enough is enough?

In some ways, “enough” and “grace” could be used interchangeably. To be honest, the word “grace” might have made for a more graceful tattoo. Ryan O’Neal, the artist behind “Sleeping at Last,” has created a whole body of music that is enneagram focused.[1] I sometimes just put “One” on repeat, listening to the refrain “grace requires nothing of me.” Grace is enough. But for me, “enough” conveys a little more, too. END_OF_DOCUMENT_TOKEN_TO_BE_REPLACED