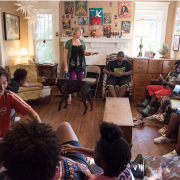 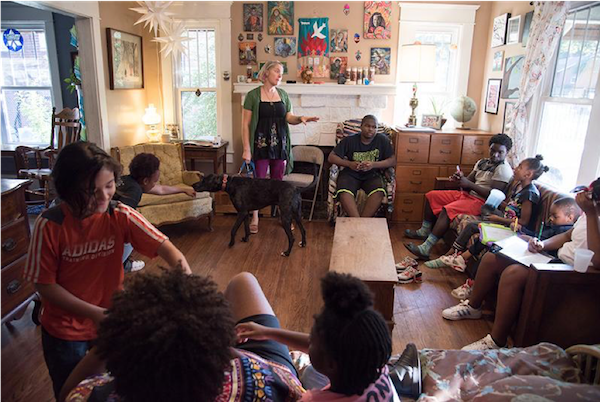 Helms and her husband, Greg, lead weekly “devos” from their home for neighborhood youth at QC Family Tree.

I know we’re not supposed to have favorites, but let me tell you about my favorite. I met her ten years ago. Her brother was an active member of our neighborhood youth group. He’d walk a few blocks from his house to ours to hang out or participate in an activity. Then, he moved. Their new house was only a mile away and it was important to us that we kept our connection, so one of us would volunteer regularly to go and pick him up for activities. I hadn’t before spent much time at his house, but now I was making several trips a week to his front door.

I wasn’t sure who’d answer the door when I knocked. There were six siblings, a parent, and often a friend of the family staying there. After a few visits, I learned to expect that she and her little sister would be the ones to greet me. I took this front door opportunity to introduce myself and strike up a conversation. Then, I simply asked, “Would you like to go with us?” The girls looked sheepishly back at their mother. Once they got the nod to go ahead, they bounded out the door with excitement and a tad bit of nervousness.

After a short time living away from the neighborhood, the family moved back. Ten years later and these girls have become family. Some seasons in our relationship, we have gone only a few hours between visits. They’ve gone on just about every youth trip, babysat my children, taken care of our dog and house when we were away, listened intently as I’ve preached sermons, gone with us on family vacations, and have nurtured me in some of my most tender moments.

You know the blurry line of being in ministry and being in relationship? Nature or nurture – we’re taught to set boundaries. We’re not supposed to fall in love with the ones to whom we minister. Some might advise refraining even from friendships with congregants. Yet, we’re called to a ministry of love and authenticity. Plus, we are humans who have a deep capacity and desire to love and be loved. This makes boundaries tricky to set and keep. END_OF_DOCUMENT_TOKEN_TO_BE_REPLACED 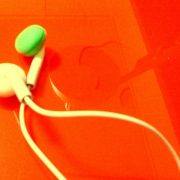 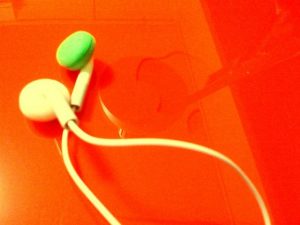 The Orlando shootings are not about me. Let’s start with that. I’m white, heterosexual (attracted to people of the opposite gender), and cisgendered (my internal gender identity matches the physical traits I was born with).

My privilege has socialized me to think that the news is always about me – I believe I can make the first comments, know something about it before anyone else, and choose to disregard it as rubbish when it doesn’t fit my worldview. Even when I actually know and experience nothing about it, my place in society gives me the privilege to believe that I am allowed to be the first to know something about the things that happen in our incredibly diverse world. Especially, my privilege assures me to know that I will be heard.

I confess this: being heard has been more important in my life than hearing. I do not listen enough.

Today, the Monday after the shootings, I realize how much I need to listen. I am yearning for the stories written by people in the communities most affected. I am looking for articles written by Latinx (a gender-neutral word form of Latino/Latina) people, posts generated from people who identify within the LGBTQIA community, blogs composed by Muslims who remind us that their religion is indeed about love, not hate. We need to hear that hatred within Islam is a perversion of Islam.

In the same way, hatred is a perversion of Christianity. God is about love.  END_OF_DOCUMENT_TOKEN_TO_BE_REPLACED 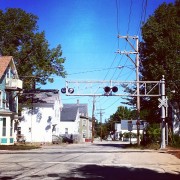 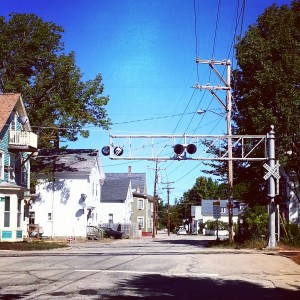 We had friends stay with us for the first time this summer. Mostly, it was a good visit. Our children are about the same ages, and get along as well as young children can. Our house is big enough that we didn’t feel squished together. We all love to cook, and to eat well, preferably with a bottle of good wine.

But there were less-easy moments, as well, when the rifts in our worldview began to show.

The hardest was when the husband of the couple decided to go out for a run with their dog. He took off his sneakers and laced up his elite running shoes, strapped the dog into her specially-designed jogging leash, and took off down the street. He was back long before anyone expected him: it was, apparently, not a comfortable run. Not enough streetlights, not enough sidewalks, too many ill-kept houses. The area was just too “sketchy” for him to feel comfortable, even with the dog.

He never left our neighborhood. In fact, he ran right past my son’s elementary school.

END_OF_DOCUMENT_TOKEN_TO_BE_REPLACED 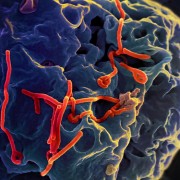 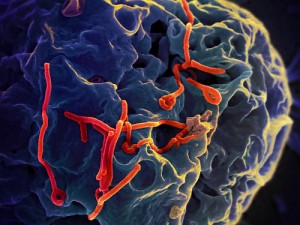 A little over a month ago a man named Thomas Eric Duncan was getting ready to leave Liberia for Dallas, Texas. Prior to departing he helped a neighbor get a sick pregnant woman into a car to go to the hospital for medical care. Or so is the story the media twisted, and spun out of control. (Since Duncan’s death, the Dallas News published a letter from Duncan’s nephew disputing that story.)

Whatever the truth, I resonate with that story: I’m in the last months of pregnancy, waiting to deliver my daughter at Dallas Presbyterian Hospital, the same hospital where Duncan was quarantined, treated for Ebola, and eventually died.

West African countries have been battling Ebola for months, treating thousands of cases. Americans didn’t tune in to the magnitude of that story until one case popped up in one city in one western country. The media descended, and anxiety rose and infected the Dallas community and the country more quickly than Ebola could.

It became clear to clergy including myself that fear and anxiety were what we had to reframe and fight. We had to keep calm and carry on with hope.

At my church, my colleague and I preached, prayed, and tried to live out calm in the midst of crisis.

Living out calm meant I went about ministry as usual visiting parishioners who were hospitalized at Dallas Presbyterian, and going to my own obstetrician check-ups there. I didn’t think twice about continuing with my doctor and pushing forward with our plans to deliver our firstborn at Presbyterian Hospital.

I also continued to go about the parts of my ministry that took me to Vickery Meadows, the neighborhood where Duncan has lived with his fiancée, Louise Troh.

I attended a parent meeting at McShan Elementary School in the heart of Vickery Meadow to share information about the community garden our church started, and an upcoming event. The discussion came round to Ebola. As panic alarm bells were sounding and paranoia was setting in the principal said this, “We are all neighbors, and this is a multicultural community. You have nothing to fear. We encourage you to keep on supporting each other, and we will not tolerate bullying or isolation of others.”

She preached to me, and I’ve held her words in my head over the last month: “You have nothing to fear.”

Other ministers closer to the situation, like Rev. George Mason of Wilshire Baptist church spoke eloquently on national television putting out an alternative to the frenzied media story…one of love, care for our neighbor, and compassion as his congregation ministered to Louise Troh, a member of their congregation.

A few weeks ago another colleague, Rev. Brent Barry invited an ecumenical group of clergy to lead a prayer vigil for hope. The mayor came to speak, but also to find solace.

As the third case emerged and anxiety and fear became more widespread, the mayor held a conference call for faith leaders. He encouraged us to share a message of love and hope. He preached to me, reminding me that Jesus ministered to the lepers, and that the early church stood in the gaps when others were abandoned. Now, more than ever we were needed.

When I get a concerned call from a loved one or church member about plans to deliver my firstborn at Dallas Presbyterian, I’m not worried. I fight the fear with facts: I’ve not touched the fecal matter or bodily fluids of the 3 Ebola patients, and neither has my doctor. I’m fine, and the baby is fine. Keep calm and carry on with hope.

When I encounter a neighbor or friend who is concerned about us welcoming “those people” from Vickery Meadow into our neighborhood or houses of worship I ask them these questions: Why are you afraid? Have you come into contact with the fecal matter, bodily fluids, or urine of those 3 people? No? Then you’re just fine. Keep calm and carry on with hope.

Now, more than ever our neighbors in Vickery Meadow or West Africa need us to love them, to welcome them, and to embrace them. They need hope, and I pray that we can continue to remember those lessons once this Ebola story ends. Shunning, and living in fear is not our story as Christians nor is it the Gospel call to hope.

I can’t wait to tell that story of hope to my baby girl when she is born one of these days at Dallas Presbyterian Hospital. Maybe I’ll even get one of the coveted birthing tubs since so many other pregnant women have changed their hospital out of fear. 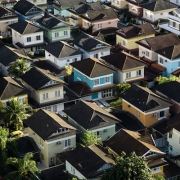 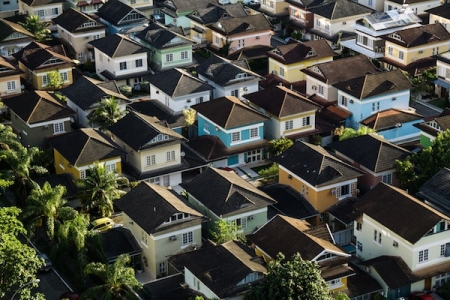 My seminary boyfriend broke up with me just a few days before I was supposed to go house-hunting. It was my senior year, and I had just accepted an exciting new call as an assistant rector. A girlfriend of mine named Mary peeled me off the floor of my dorm room and insisted on driving me to look for houses in this town in which I had never visited, much less lived. Moving away from all that I knew felt terrifying. Mary metaphorically held my hand while we visited apartment after apartment, until I found “the one.” The townhouse was brand new, painted a cheerful cream, in a somewhat Pleasantville-like neighborhood. Mine was a sweet two-bedroom, two-and-a-half bath, with a rent in the outer limits of what I could afford.

I moved in two months later. By then I felt like myself again, and had even met a man in the new town, but I was still nervous about not having friends in this new community. As I moved in, I noticed several people about my age around the neighborhood. Not knowing what else to do, I threw a “Welcome myself to the neighborhood” dessert party, and invited all my neighbors.

That was one of the best decisions I have ever made. What was scheduled to be a three-hour, mid-afternoon open house, turned into an eight-hour party, replete with food, festive beverages and board games. I came to realize that my neighbors on either side of me were both named Sarah, and we assigned ourselves the titles Sarah1, Sarah2 (that’s me) and Sarah3. While the woman in the fourth house is named Mandy, she too became part of our circle of friends. END_OF_DOCUMENT_TOKEN_TO_BE_REPLACED