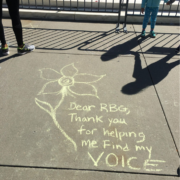 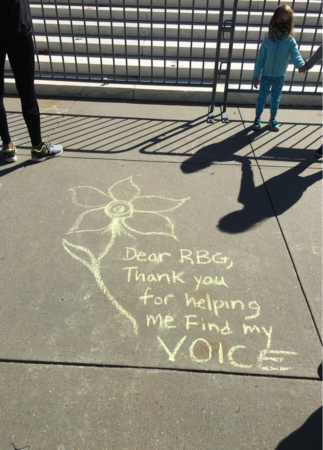 A note of thanks to the late Justice Ginsburg, written on the sidewalk near the Supreme Court building in Washington, DC on Saturday, September 19.

It’s midnight. At some point my sleepless child drifted off. I did for a while, but it didn’t last. I felt drawn to read the Bible. Of course, I turned to the book of Ruth. Where else, on this night, when we have lost RBG?

Ruth is an odd story in many ways. The whole plot centers around weird antiquated marriage customs. There are some scandalous sexy bits that don’t translate well into English.

It’s an odd story in the Bible, because it centers on the love and steadfast commitment that two women have for each other. There are only two books named for women. Very few Biblical narratives pass the Bechdel test.[1]

And it opens with the phrase, “In the time of the Judges…” which may mean very little to you. Judges is not a book taught much in Sunday school or preached much from the pulpit. It’s a depressing book about a terrible time in Israel’s history. There was a void in leadership, and the people “did as they pleased.” The nation was in shambles, constantly getting invaded and ransacked. The book of Judges reflects an extremely violent, gory, and chaotic era.