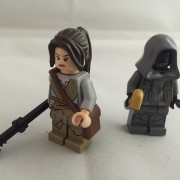 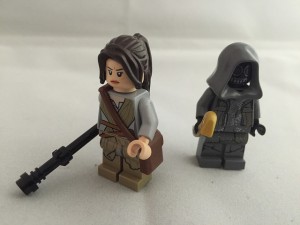 I am not ashamed to admit that the much-anticipated Star Wars Episode VII: The Force Awakens brought me to tears. Maybe a part of that was hearing John Williams’s iconic theme music paired with an opening scroll making no reference to Trade Federations, Gungans or Midichlorians. But mostly it was getting to know the central character of Rey and realizing that I was watching a Star Wars movie about a woman, a very young woman at that.

Rey redefines the “strong female character” stereotype. Of course she is smart, strong, and beautiful, but she is also a fully realized human being with faults. As impulsive as Luke is in A New Hope, Rey is afraid to step out of the only life she has ever known. Being a strong woman does not mean eschewing any of those weaknesses that make us human. More importantly, from the perspective of my own longstanding relationship with the Star Wars franchise, in this new series Rey is the hero chosen for a special destiny, not unlike a vocational calling.

I have always been drawn to the force-using characters in the saga: Obi-Wan Kenobi, Yoda, and even Luke, with all his whininess. From the time I was a kid, there was always something to the way the Jedi were depicted that resonated deeply with what I desired to be—spiritual, wise, and, let’s be honest, kind of special. I might have written a seminary paper on Yoda as my ideal of what a priest should be.

In the weeks since The Force Awakens was released, many bloggers and reviewers have drawn comparisons between Daisy Ridley’s Rey and Carrie Fisher’s Princess Leia of the Original Trilogy. Many of these commentators (including me, on my own blog) have noted the important distinction of Daisy Ridley’s character now being the unqualified hero of the new franchise, in contrast with Leia who was left on the sidelines. Sure, Leia was a ground-breaking female in science fiction: she stood up to Darth Vader, she was one of the most important leaders of the Rebellion, she rescued Han Solo, and she was the kind of hero a kid could aspire to be.

But as I reflect on these two powerful women, I realize there is a greater distinction that particularly resonates with my experience as a young clergy woman. Simply put: Leia is not a Jedi. She is not the chosen one like her brother Luke. Yes, admittedly Yoda and Obi-Wan begrudgingly admit that Leia might be a back-up messianic figure if Luke succumbs to the Dark Side of the Force. Even in Episode VII, however, there is no indication that General Organa lived up to her heritage as a Skywalker and became a force user. Princess Leia, like her mother Padme in the prequel trilogy, has the capacity to be a powerful political leader, though not a spiritual leader. In fact, there are no prominently featured female Force users/Jedi in any of the Star Wars films up to this point.

A strange parallel seems to exist between my childhood relationship with Star Wars and the church of my childhood. I received the same message in so many ways. Yes, women can do great things. We affirm the role of women … just not as people who can be called, chosen, and gifted in the role of spiritual leader. Women cannot be chosen ones, so central to the Star Wars mythology (and to the universal hero’s journey, long established as the source of the original trilogy). I have long since moved away from a church context that could not affirm the vocations of female clergy. But I have not left behind Star Wars.

As I watched Episode VII, I cried tears of joy thinking about what it would have meant for my 9-year-old Star Wars-obsessed self to have had Rey as point of identification. Seeing Rey fly the Millenium Falcon and wield a light saber made me giddy with excitement. On a deeper level, though, it was realizing that Rey is the person called to pick up the mantle of spiritual leadership left by Luke that changed something for me. It filled me with so much hope for my own daughter Amanda: how much more empowering her relationship with these films might be as she grows up! In addition to featuring a central female protagonist like Rey, the film allows us yet another glance at the amazing General Leia. We hear the wise words of guidance offered from Lupita Nyong’o’s Maz Kanata. And we see women enabled to do everything from flying X-wings to commanding Imperial squadrons (if I have one wish for Episode VII it is even more of Gwendolyn Christie’s Captain Phasma). I am thrilled for Amanda and all the girls who will grow up seeing not just the adventures but also the spiritual legacy of Star Wars as rightfully theirs. Who knows? Maybe there will be a new generation of geeky Young Clergy Women inspired by the new iteration of Star Wars.

Rachel Kessler is the Chaplain at Kenyon College and Priest-in-Charge of Harcourt Parish Episcopal Church in Gambier, OH. She blogs at RevRachelRambles.Worpress.Com