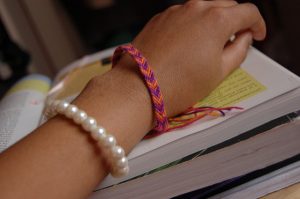 I have been best friends with the same four women for over 20 years. It’s only now that we’re in our 30’s that we’ve realized how fortunate we are to have sustained our friendship for so long. What a gift it is to have friends who have known me as a little girl, a young woman, and into middle age, who have witnessed the successes and failures of every stage of life, and who have loved me through them all. However, this intimate knowledge of my life is not all that my friends offer me. It has taken me some time to recognize and make peace with this, but part of the gift of their friendship is that my friends do not respect or even acknowledge my calling as a minister.

Initially, we five were drawn together because we lived in the same neighborhoods and were in the same classes at school. We “played well together” at an age when that was the most important part of friendship. As the years went on we experienced our share of falling-outs and at times (as all friends do) hurt each other deeply. But we stayed together, and what had once been playground compatibility slowly and mysteriously transformed into a mature love.

Always, this love was enriched by our mutual love of God. As children, our religion was simple: we all went to different churches in our Bible Belt community, but the bottom line was that we believed that Jesus had saved us. My friends were Church of Christ, Southern Baptist and Presbyterian Church (PCA). I was United Methodist. When we were small, we thought ourselves quite a charmingly diverse little club of Christians. But as we grew older and learned more about the differences in our theologies and how these played out practically in our lives, the religious tensions grew. By the time we were teenagers, I was feeling the heart-slap of these tensions. One Sunday, one of my friends told me she wasn’t allowed to step foot in my church because my church was “liberal.” The most obvious difference between our churches was that my denomination ordained women, while theirs had explicitly condemned women pastors.

My friends and I went to different colleges and had different experiences. My path in college led me to apply to seminary. I can remember feeling excited about what I was starting to articulate as “my call” to ministry, and anxious to tell my friends about it when I saw them at Christmas. But my friends’ conversation that Christmas turned to Sarah Palin (then running for U.S. Vice-President), and why she as a woman should stay at home with her children. Suddenly I felt fearful that my calling would not be accepted by my friends. Or worse: I worried that I would be rejected by them because of it.

Through the years that followed, my work as a minister was a taboo subject among my friends. We never spoke of it; it was as if I had no job. Yet somehow, I felt in the silence a love for me: my friends were also afraid it would tear us apart to speak of it, and they didn’t want that to happen. Their silence was a way of holding onto me, of keeping me in the fold. If none of us admitted what I did for a living, then no one would have to condemn me, to say the words that they knew would hurt me and perhaps even drive me away. As I gained experience in ministry and became more sure of my calling, I needed their acknowledgement less and less. We built into our friendship an unspoken rule that no one would name my “sin,” and that I wouldn’t force them to face or accept my calling.

This has made for some awkward moments. Recently, we all hosted a baby shower together. When a guest complimented me on tiny hearts I had made for confetti, I told her cheerfully that I had used the dye-cast at work.

“Oh, are you a teacher?” the woman asked.

I let the moment pass.

Early in my ministry I would have been offended and hurt by my friend’s inability to even say my profession aloud. But in these latter years, I feel compassion for her. None of them know how to resolve my work with their love for me, but they are choosing to live with it anyway. And, in the meantime, there has been an unexpected blessing in the fact that my friends see me as an abject sinner because of my work as a woman pastor: my friends see me for who I really am.

At this point in my life, I am old enough that my parishioners and most people in my community put me on a pedestal as a religious leader. I enjoy their esteem and appreciate their respect for me, but they treat me differently because of it. There’s the part of the introduction that warns, “She’s a minister so watch your language!” or the phenomenon of someone hearing what I do and expecting me to know the answers to every problem in the universe. Even my parents, who are proud of my work, seem to see me differently now. At some point in the past few years, though, I realized that when I spend time with my best friends, I feel none of the pressure of being a religious leader. Because, to them, I am not one.

Not long ago, I was going through a difficult time with my spouse. I was distraught, not knowing where our crisis would lead us. Worse, I felt that I couldn’t share our problems with anyone. What would people think if the pastor couldn’t handle her own marriage problems? If the pastor was in tears, or didn’t know what to do, or worried that not even God could solve this one?

I could call my best friends, though. They didn’t think about what it meant that I, the pastor, was in this situation. They thought about me, their friend, a sinner (clearly) just like them, and they gave me the support I needed and the prayers I craved. They reminded me to see myself as the human being that I am: broken, guilty, and in a heap of trouble. They urged me to accept the grace of God.

I have come to appreciate the deep love that it must take for my friends to accept me even though they believe my career makes me an unrepentant sinner. And I have come to profound gratitude for the freedom that their love–devoid of respect for my status as a religious leader–gives me to be the lamb of God’s own flock, the sinner of God’s own redeeming, that I really am. Among my friends, I am not given a place of high honor. But I am given a seat on the floor–right next to them–where they accept me and serve with me side by side. I think I am only beginning to sense how valuable a place this is.

And, they are only beginning to realize a few things too. Last year, one friend contacted me with a shy message saying that she had read some of the religious blog posts I had written, and that they had been meaningful to her. It was not lost on me that her decision to send me that message was a thoughtful and bold step towards acknowledging my work. God only knows, but just as we grew out of the playground and through adolescence and into marriages and babies together, perhaps one day we will grow into an understanding of the many and varied ways that God has worked in our lives, and in our life together as friends.

Why I Go to Church on Sunday, Especially When I Don’t Want To
Scroll to top