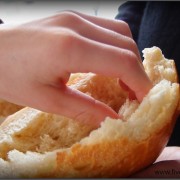 Editor’s Note: The name of the child has been changed to preserve her privacy. 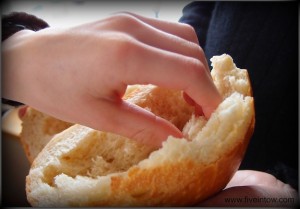 In seminary, I learned all about the right and proper celebrating of the Lord’s Supper. Like any good Presbyterian, I could quote the appropriate passages in our Book of Order and Book of Confessions —not to mention that I had memorized the standard liturgy from our Book of Common Worship. Whether communion was to be served in the pews or by intinction, I was confident that the meal would be properly celebrated with everything done “decently and in order.”

I knew what to say. I knew what to do. But somewhere along the way, I had lost touch with the wonder and deep joy that is found in the sacrament.

That is, until I met a 7-year-old named Zoe.

We met while I was serving as an associate pastor in my first call. Zoe attended the 8:00 a.m. worship service with her mother and sister. During the prayers and readings, she carefully followed along. When it was time to sing, she belted out the tune as best she could. During the sermon, she quietly doodled on the blank spaces of her bulletin.

In that service, we celebrated the Lord’s Supper by intinction each week, sharing the bread and cup with each other, face to face. As soon as the words of the Invitation to the Table were spoken each week, Zoe sat up in her seat. Her eyes would be wide with wonder, hanging on every word that was spoken. As we gave thanks for the Holy One’s work in creation, she would smile. As we spoke words of praise for God’s steadfast love, Zoe nodded her head in agreement. As we asked the Spirit to bless the bread and cup, she bounced excitedly in her seat, anticipating with joy what came next.

The congregation formed a circle around the communion table. The bread was broken and wine (juice) was poured. Then, one of the pastors and a member of the congregation each took one of the elements, walking around the circle together as the people each tore off a piece of bread from the loaf and dipped it in the cup. Most people took a small piece. A few took a tiny, crumb-like piece. But Zoe tore off a chunk of bread —a huge piece that was sometimes as much as half the loaf. From that huge piece, Zoe would tear off a smaller piece to dip in the cup, eat that piece, and then snack on the rest of her hunk of bread during the rest of the service.

Week after week, Zoe did this. Occasionally, she asked if she could take whatever bread was leftover at the end of the service. Sometimes she shared that bread with her sister and friends. There was an eagerness about her actions, a kind of passion and hunger. I must admit, I initially thought that it was simply because she liked bread. But, the Spirit nudged me (as She so often does) to ask Zoe about it.

“You really like the communion bread, don’t you?” I asked.
“Yeah, I really like the God bread,” she replied, still snacking on the fist-sized chunk of bread.
“The God bread?” I puzzled.
“Well,” she said, holding up her piece, “God gives us bread as a gift every week. God does everything for us, and gave us Jesus… and even though people killed him, God brought him back for us… and God still gives us this bread!” She handed me a piece of her bread and added, “I like how you talk about that every week.”

It was the simplest and most eloquent explanation of communion that I had ever heard. “So, is that why you always take such a large piece, Zoe?”
“Yeah! I mean, this bread is from God — why wouldn’t I want a big piece?”

Too often, we miss the amazing, beautiful truth that God gives us bread when we gather for communion. Sure, we say or hear the words that describe the bread and cup as “gifts of God for the people of God,” but Zoe really understood those words. She took them to heart, and she couldn’t get enough! She had a hunger, not just for bread, but for a connection with the Holy One. God had given her a gift, and she didn’t want to miss out on even the smallest crumb of it!

I have a deeper sense of wonder when I approach the Table now. I have a deeper hunger. And now, when I partake, I take a larger piece —and I usually ask for some of the leftover, too. I might still celebrate communion decently and in order, but thanks to Zoe, I also do it with wonder.

Amy E. Loving Austin serves as pastor of two of the coolest Presbyterian churches in the Finger Lakes region of New York. During her free time she enjoys watching Doctor Who with her husband, reading fantasy novels, and dabbling in crochet. Her life is fueled by faith, friendships, essential oils, and coffee.

The Old, Old Story for a New, New Step-Mom
Scroll to top