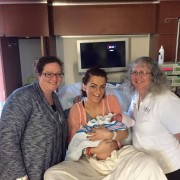 2 Timothy 1:5  I am reminded of your sincere faith, which first lived in your grandmother Lois and in your mother Eunice and, I am persuaded, now lives in you also.

About a month ago, this amazing thing happened: I became a grandmother. In and of itself, that doesn’t seem out of the ordinary; after all, people become grandparents every day. But these two facts make it amazing:

Our family is a bit unconventional, in the loveliest way. Four years ago this past November, my husband and I were blessed when three girls walked into our home. They were 15 (almost 16), 6, and 5. These three sisters came to live with us through the Foster Care system; we were the second foster home they’d lived in. I tell people that they walked into our home and straight into my heart. The younger two look like me, in a kind of way. They have round faces, curly thick brown hair, and brown eyes. My oldest daughter is tall and thin and gorgeous, and looks nothing like me. I often wish that I looked like her.

Last spring, on the Monday of Holy Week, my daughter came to me with tears in her eyes to tell me she was pregnant. I think my response was something like, “Okay.  I love you.” But inside I was in utter turmoil. I was not in turmoil because I was upset with Amira; I’d like that to be clear. Yes, Amira was young and unwed, but that didn’t bother me as much as it might other parents. I was in turmoil because I wanted her to have the chance to be young a little longer.

Because of the dysfunction in her biological family, Amira had to grow up faster than most. She was 10 when my middle daughter was born, and then our youngest was born 18 months later. Amira did a lot of their early parenting and in many ways parented herself. It was only when she moved into our house that she was able to just worry about being a kid – and that was only for 3 ½ years. My husband and I wanted her to have more time. When Amira first moved in with us I jokingly told her, “I only became a mother at 30, I don’t want to be a grandmother at 31.”

But I was also in turmoil for other reasons – all of them to do with me. My husband and I had been trying to have biological children for a while before the girls moved in. While adopting and fostering had always been a part of our plan, so had biological children. But it quickly became clear that this was not to be for us. Five IVF cycles resulted in five miscarriages, the last happening about a year after the girls moved in. So Amira’s pregnancy brought back all of that grief like a flood. As I went to doctor’s appointments and heard the heartbeat for the first time, looked at ultrasounds to see my grandson, and walked through the pregnancy and birth with her, my heart and mind wrestled between joy and jealousy – between happiness and anger.

Last month he came into the world screaming. A beautiful 7 pound, 11 ounce boy. He is already spirited like his mother. I can see in him her fierceness and independence. I tell people he looks like me, and they laugh.

Since his birth, I’ve been pondering what it means to be a grandmother. I didn’t really think about it much during the pregnancy because I was so consumed with other things. It is clear that roles in our family are a little murky because of our unconventional situation. After all, there is not much of an age difference between my oldest daughter and my husband and I. We would have been 13 or 14 if we’d had her biologically. She is older than two of my youngest siblings. There are times she sits with my siblings and I conversing like one of us, and times I have to set boundaries as a parent. It’s weird, but for the most part we make it work.

But how do two 33-year-olds act as grandparents? Most grandparents make jokes about how it is their job to spoil their grandkids, or to rile them up and then send them home. While Amira and Cohen are not living with us, I know that this is not going to be the description of our role. There will be times when we are kind of like parents to both of them. There will be times when it is the great-grandparents who are spoiling/riling and then sending him home. Even the words for grandparents seem weird when used in conjunction with my name.

And so I turn to scripture. It is Paul’s words to Timothy that give me a guideline for my role. As with my children, I want my legacy to my grandson to be one of faith and love. My job is to teach him and love him in such a way that someday someone will speak these words to him about me. “I am reminded of your sincere faith, which first lived in your grandmother Tricia and in your mother Amira and, I am persuaded, now lives in you also.” That will mean I’ve done my job, both as a mom and as a grandmother. 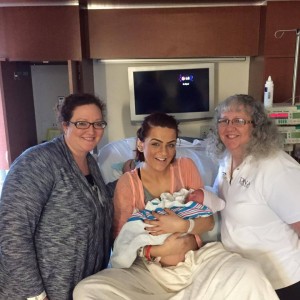 So I may not look the part, and it may not have happened with the timing we all would have liked, but he is here. And he’s darn cute. World, meet my beloved grandson (the most amazing grandson that ever lived…I’ve got the bragging part down pat!) Cohen Rock Watson.

Patricia Watson lives with her husband, two of their daughters, and one foster baby in Baltimore, Maryland where she serves as Lead Pastor for an amazing UMC congregation. Her oldest daughter and grandson live too far away (really only an hour and a half) and everyone is already in love with him. Her family also enjoys time with their cats, Calvin and Wesley, and their dog, Pope Barkimus the 1st.