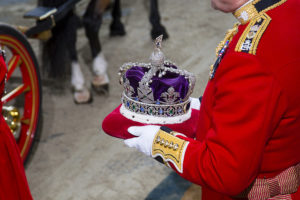 “Elizabeth Mountbatten has been replaced by Elizabeth Regina, and the two Elizabeths will often be in conflict,” Queen Mary (Eileen Atkins) tells the new sovereign in a remarkably un-comforting letter of condolence, “But the fact is, the Crown must win. The Crown must always win.”

“The Crown,” Netflix’ big-budget series examining the life and reign of Elizabeth the Second (Claire Foy), is a lavish production. The choice of title is significant: it’s a work about Elizabeth as she grows into – or kicks against – the weight of “the Crown.” For me, the series comes most alive in the moments where Elizabeth is struggling to work out how to be herself, and what that self is becoming, under the influence of her new role. There’s a striking moment in episode five, as Elizabeth prepares for her delayed coronation, where she tries the crown on for the first time, and looks at herself in the mirror. Foy’s expression reminded me strongly of my own, the first time I tried a clerical collar on. The director’s shot choices keep us conscious of the fact that Elizabeth is a slight young woman – wearing the crown, keeping the orb and sceptre steady during her coronation, is a physical effort for her, and that too may resonate for clergywomen serving churches with a tradition of vesting. At least Elizabeth doesn’t have to contend with a chasuble that’s long enough to trip her!

The central conflict, between one’s integrity as an individual, and the demands of the role one is placed in, is relevant to all of us in ministry. Elizabeth is caught between the example of her two predecessors, the Duke of Windsor (“Uncle David”), and George VI. Elizabeth loves and reveres her father. She also loves her life as a naval officer’s wife and a young mother in Malta. Phillip (the superb Matt Smith) loves his wife, but he’s made what he already thinks are plenty of compromises to win her, renouncing his nationality, title and name. Those compromises are only just beginning. Elizabeth regards her father as a hero, but she also knows that her mother and grandmother believe his reign shortened his life and made him profoundly unhappy. Meanwhile, “Uncle David”, superficially charming, but bitter and spiteful, is held up as an awful warning of what happens if you choose selfishly.

Throughout the season, we see Elizabeth more and more hemmed in. She has some triumphs – the moment when she finds the courage to give a well-deserved scolding to Churchill (John Lithgow) is a particular high note, and one that might resonate with young clergy women’s own struggles to claim our authority. But for the most part, we see her choosing to sacrifice her own happiness, and her family’s, to her duty as she understands it. “What sort of a marriage is this, anyway?” snarls Phillip, as the role of prince-consort yet again undercuts his understanding of marriage and masculinity.

The Crown, indeed, must always win. But should it? The series doesn’t attempt an answer. It takes Elizabeth’s sense of vocation seriously – there are a series of moving scenes where we’re made to understand her sense of her coronation as a kind of ordination. But we also see the cost. The viewer is likely to sympathise with Margaret’s thwarted love story. But while Phillip’s struggles may sometimes make us impatient, it’s clear he – like some clergy spouses, perhaps – genuinely didn’t realise what he was getting into.

The public eye makes Elizabeth’s problems still harder to solve. It’s a nightmare version of the way relationships are pressured by public ministry. By the end of the season, Elizabeth has poisoned her relationship with her sister and damaged her marriage. Will Elizabeth Mountbatten be permanently obscured by the Crown? We’ll have to wait till next season to find out.

Neither Elizabeth Mountbatten nor Elizabeth Regina are exactly feminist activists. One of the plot points in the first episode is her insistence on saying ‘obey’ in her wedding vows – a vow she finds increasingly hard to keep as Queen. Elizabeth is caught in a web of conflicting duties, desires, and expectations which will resonate to a greater or lesser extent with any woman in a public leadership role.

It’s nice to see that the Crown doesn’t always win.

“The Crown,” however, is a winner.

Jo Kershaw is an Anglican priest in the Pennine market town of Todmorden, in the north of England, and married to a YCM. A Scot by birth, she has a doctorate in mediaeval German and a love of languages, photography, knitting, and geeky books and tv.

Called from the Shadows

Not So Silent: Christmas Worship with Children
Scroll to top