This piece was originally published on Darian Duckworth’s blog. 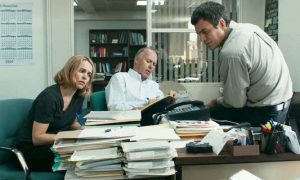 While there is a trend among colleges and universities these days to downsize journalism programs, for many of us journalism is “trending.”

For instance, the most downloaded podcast of all time, Serial, has a former newspaper reporter as its host and a small staff of researchers with backgrounds in journalism. The podcast’s tagline is simple: one story told week by week. In the first season, host Sarah Koenig investigated the story of a man named Adnan Syed, who was sentenced to life in prison for the murder of his girlfriend 16 years earlier.  In the recently completed second season, Serial dug into the story of Pfc. Bowe Bergdahl, who walked away from his post in Afghanistan and was held captive by the Taliban for five years. These were heavy stories that took hours to tell. Koenig interviews experts about cell phone towers and maps of rural Afghanistan and other topics that seem boring. In the hands of seasoned journalists, those facts became fascinating.

While walking the dog earlier this week, I paused in the middle of the road to listen more carefully to the last episode of the second season. Koenig talked about blame and guilt. Forgiveness. Complexity of the human mind. She admitted, as she did in season one, that her questions still outnumbered her answers. What I heard was not a journalist–but a theologian.

I felt a similar rapture when I watched Spotlight, this year’s Academy Award winner for Best Picture. Like Serial, the premise is simple. Four investigative journalists at The Boston Globe look into allegations of abuse and cover-up in the Catholic Church. They sift through one layer of stories only to find more layers. The files on the desks multiply. They seek the truth. They comfort victims who admit for the first time what happened to them. They question the faith in which they grew up. They sound a lot like theologians.

In a roundtable interview on the DVD, Globe editor Marty Baron, who first asked the Spotlight team to pursue the story, talks about his motivation. He recalls reading a column by Globe columnist Eileen McNamara about the alleged abuse that included the statement, “The truth may never be known.” Baron’s response was, “For me, and for us, that should always be unacceptable. We should do everything possible to find the truth.”

Sarah Koenig, Marty Baron, and the teams of Serial and Spotlight seek the same goal: truth for the sake of justice. This is the heart of journalism. In order to tell the story, the writers must first know the story. They only know the story through thorough, persistent asking of questions.

John 18:38a is one of Scripture’s must haunting questions. Pontius Pilate looks at Jesus of Nazareth and asks, “What is truth?” We don’t know how Jesus answers, or if he says anything more. All we know is that Pilate sees “the truth” that Jesus is innocent. In the second half of verse 38, he tells the Jewish leaders, “I find no grounds for any charge against him.”

We know how the story ends. Despite the revelation that Pilate receives, Jesus is tortured and crucified. No matter how much Pilate wants to understand “truth” intellectually, he does not stand up for truth in reality.

Do you live with a compassion that invites people to share their stories?

Do people trust the Christ who lives in you?

Then let us be “quick to hear, slow to speak….” (James 1:19). Listen for the truth. Then speak the truth. Write the truth. Live the Truth.

Dying or Rising? A Review of Claiming Resurrection in the Dying Church: Freedom...