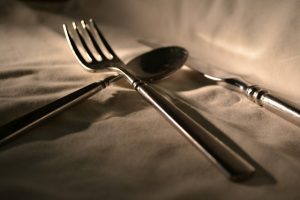 Many years ago, my friend had a young daughter with serious medical issues who had to be hospitalized for several weeks. Understandably, my friend was under enormous stress and she did not have the time, energy, or desire to cook. Her priority was being with her daughter in the hospital. So, for these weeks, she subsisted on rice cakes (this being the early 1990’s, rice cakes were ubiquitous in the low-fat, high carbohydrate craze). It was a quick way to eat, and it felt the appropriate food considering her circumstances. She was sad and fearful, and food had no taste: might as well eat something that tastes as wretched as she feels. It wasn’t just that the rice cakes were dry and flat; her spirit was dry and flat.

Thanks to God’s mercy, the daughter recovered and was released from the children’s hospital. But my friend continued to eat race cakes. Though her child was now well, she had developed a habit of eating them, and a habit is hard to break.

A couple of years passed, and the season of Lent was coming up, a season in which traditionally people give up something of value to them. My friend was surprised when, in prayer, the Holy Spirit nudged her with an invitation: “maybe you should give up rice cakes for Lent.” When my friend told family members, they teased her. After all, people normally fast from something desirable, like chocolate or coffee. Who gives up rice cakes for Lent? But my friend did, and, within days of giving it up, she lost her craving for them. At the conclusion of Lent, she didn’t resume her rice cake eating ways. It was God’s way of signaling to her that her previously dry and flat season was over.

I resonate with my friend’s experience. Too easily I have slipped into the habitual thought. “This is my lot in life: I just have to make do with eating crumbs and feeling crummy.” When I look around at the state of the world and the state of this county, I grow discouraged and overwhelmed: how long will the wicked prosper? In the face of these challenges, I need to be paying attention to the promptings of the Holy Spirit. Seasons change, and there will come a time when this painful season is over. Sometimes I act as if subsisting on rice cakes is the only way forward. But as Ecclesiastes 3 says, “For everything there is a season…a time to break down, and a time to build up; a time to weep, and a time to laugh; a time to mourn and a time to dance.” There is a season for fasting, and there is a season for feasting. There is a time for us to give up something of value, and there is a time for us to reexamine what has become too valuable to us and why. There is a time to eat rice crackers beside a hospital bed, but there is also a time to come to the Lord’s banqueting table, and experience afresh the banner of love unfurled over our heads.

My hope is that we pay attention and heed God’s gracious invitations to us. When appropriate, God will invite us to mourn and to wear sackcloth, and, also God will eventually invite us to cast off those sackcloth and grave clothes that cling to us long after a season has ended. When the Lord nudges us, let us trade the dry and the tasteless for God’s extravagant banquet.

Christ is Risen! He is risen, indeed! Alleluia!

Emily began as Associate Pastor of First Presbyterian Church in Maumee, Ohio in 2015. She previously served as a pastoral resident at Bellevue Presbyterian in Washington State. She holds degrees from Princeton Theological Seminary and Whitman College.

Is Your Pastor Sexist? Is the New York Times Sexist? Are You Sexist?
Scroll to top