Seculosity: How Career, Parenting, Technology, Food, Politics, and Romance Became Our New Religion and What to Do about It was published by Fortress Press on April 2, 2019. 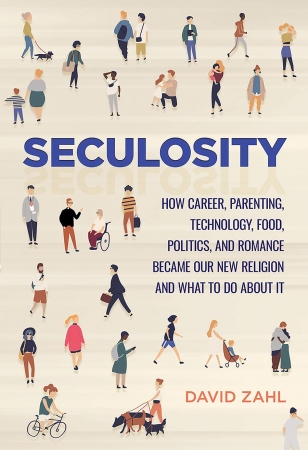 “Do you remember the days when the Sunday school was full and everyone went to church on Sunday?”

You don’t have to be around a 21st-century church very long before you start to hear questions and comments like these. They reflect an ongoing narrative that recalls mid-20th century glory days of the church in which Christians enjoyed power and esteem ( glorious as long as you were straight and white and male, and as long as you did everything the right way…).

The specter of this bygone era of the church has the ability to consume modern faith communities, to push them into a mentality of scarcity over all-we-once-had-and-why-can’t-we-just-have-those-things-again.

In a new book out this month, David Zahl, founder and director of Mockingbird Ministries takes this question head-on, with a perspective that offers the possibility of a way forward.  The book is called Seculosity: How Career, Parenting, Technology, Food, Politics, and Romance Became Our New Religion and What to Do about It.  In it, Zahl explores the possibility that our culture is not becoming less religious at all, but rather we are becoming religious about more and more things.

He uses the neologism ‘seculosity’ to describe the many activities and identities to which modern Americans devote a zeal that can be described as nothing so accurately as religious. From leisure activities (SoulCyle or CrossFit?) to parenting style (attachment or Babywise?) to political identity and work, from Zahl’s perspective, these are more than activities, they become part of people’s identities. These seculosities offer not just community, but a justifying story of their lives, a frame through which to see the world, a mechanism by which they can establish a sense of “enoughness.” They offer identity, community, meaning, purpose in ways that religion once did in wider society.

The problem arises, he argues, when we realize that no matter how much we devote ourselves to these pursuits, there is always more we could be doing or accomplishing or achieving. We could find our soulmate and get started on happily ever after. Our kids could win more awards. We could work harder, advance faster, earn more. But the focus on all of this makes the fact that the achievement of the goals we create for ourselves is an ever-vanishing horizon.

Churches can get caught up in this too, of course, the very phrase holier-than-thou evoking a performative piety as achievement-oriented as any exercise regimen or sales competition. But the heart of the Christian faith, Zahl argues, is something altogether different: grace. Jesus who hung out with sinners and cowards and failures and chose them as his followers, chose them to spread a paradoxical good news to the world.

What if church is the one place left where we could be not-enough, where we could let go of the struggle and let God meet us and love us right where we are? What if it could be a place where we as communities of faith could meet each other in the messiness and brokenness of our actual lives instead of the curated versions we’d rather show the world? How might we be transformed, as individuals, and as a society if church could be that?

What if our churches lived into their identities as places to experience a grace so rarely glimpsed in this fast-paced, competitive world, a place where we learned to extend that grace as well?

Seculosity is an important read for Christians who seek ways to articulate the grace of Jesus Christ that stands in contrast to the persistent narrative of not-enough in this dizzying modern world. Clergy who are tired of competing with the many demands on a congregation’s time, attention, and energy will find an invitation and a challenge among the pages of Seculosity to image how our churches might redirect the energy spent competing with modern life toward articulating the grace that can still be found in the midst of it. And there is always enough of that.

The Rev. Charlotte LaForest is an Episcopal priest living and working in Connecticut. Charlotte and her husband Eric live on campus at the boarding school where Eric works, and have three children, August (born in 2014) and twins Rowan and Evelyn (born in 2017), as well as a slobbery dog named Whitman. Charlotte loves reading, knitting, fancy coffee, and going on family walks.

You Are Found: A Review of One Coin Found, a Memoir by Emmy Kegler