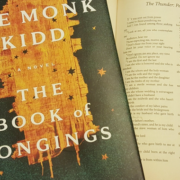 “Yeah, I guess I’ve never gotten into Sue Monk Kidd’s books because nobody gets murdered in them,” my friend explained when I was talking with her about The Book of Longings. “Well,” I responded, “spoiler alert: someone does get murdered in this one. Jesus.” 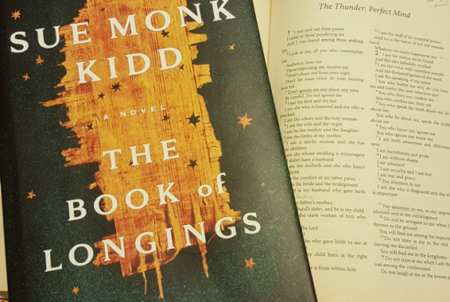 The Book of Longings is Kidd’s long-awaited new novel. I heard about it on NPR and listened to other clergy talk about it excitedly. I was not interested, but between the extra reading I was doing to survive the pandemic and my desire to always be on the lookout for church-related summer reading book club books, I picked it up. Though I’m not a big murder mystery reader, my friend’s desire for something fast paced and exciting was exactly why I was not interested in the book. Frankly, Jesus fiction is boring. As a pastor and creative writer, I have tried to weave together my work subject matter and my love for fiction and it never works. Jesus in my work and others I’ve read is always too nice. A serene, ethereal bore with a great smile. I even thought Christopher Moore’s Jesus in Lamb is a little bland, and Moore did not care about offending Christians!

Kidd does better than most in writing Jesus, perhaps because of her desire to focus on Jesus’ humanity. Kidd’s Jesus is sensual, thoughtful, frustrated, empathetic. Though she doesn’t depict sex scenes, Jesus makes love to his wife. We see scenes where he gets angry, where he questions, where he works long hard days. However, Kidd still writes him as a little too much of a good guy like in other Jesus fiction: he looms charismatically for his wife in parts of the story where it would seem more real for there to be a rift, like when he leaves her to follow John the Immerser. Toward the end of the book, his wife’s devotion to him seems to make less sense to me, as though Kidd was unconsciously relying on us to just think of Jesus as always wonderful instead of showing us what of him was so lodged in his wife’s heart even when they were separated.

But the story isn’t actually about Jesus. In many ways, Jesus doesn’t have to be fully formed because he’s really not that big of a character. Instead, Kidd has crafted this story about a woman named Ana who happens to be Jesus’ wife, and creates around Ana a world rich in women’s relationships, showing them scheming and encouraging. Kidd invites us into the vibrant world of ancient Palestine, showing us the reach of the Roman occupation, the gap between rich and poor, and the way women were trapped by both religion and society. She also shows how women took control of their own voices and bodies. Women use birth control, acknowledging the fact that birth in the ancient world was more deadly than beautiful but also naming that some women are not called to mother. Kidd shows women writing and leading. Perhaps the most beautiful sentences in the whole book are her descriptions of Ana learning to write, longing to write, and actually putting her stories to paper.

Ana’s story is of how she becomes a powerful voice of her own, and in so doing Kidd does something I have never read in other Jesus fiction. She weaves in non-canonical scripture, ancient texts written around the time of other Biblical writings used in ancient communities as scripture but ultimately cut from the canon. The story is as much about the non-canonical scripture she uses, The Thunder, Perfect Mind, as it is about anything borrowed from the Gospels of Matthew, Mark, Luke, or John. Kidd also packs her book full of theology; though there are probably more theological discussions between Ana, her aunt, and her friend than of her sitting at Ana’s husband’s feet being taught. This is a story about women creating, thinking, acting, and making a way out of no way for themselves.

Ana is physically separated from her husband during his teaching as it is described in the Gospels. She is not there on the mount as he shares the Beatitudes, or with the hemorrhaging woman as she seeks healing; she does not even know Mary Magdalene before her husband’s death. And yet her own journey is about seeking the divine and building a community to support her in that search and encourage others in their own search.

I needed the inspiration to be more like Ana. This summer, feeling far from my community of support and encouragement because of the pandemic, tired of Zoom, I needed to remember that I can create community in a new way, just as Ana did after threats on her life. This summer while calling on my local government to defund the sheriff’s racist immigration policies and implement better diversity and inclusion curriculum in the schools, I needed to remember that I am called to use my voice to speak truth to power no matter how impossible it may seem. This summer and really every season, I need to remember to debate and learn from people who love God, like Ana and her husband. And I need to connect to the wisdom found in and beyond Ana’s husband for myself. Sue Monk Kidd has not written a thrilling murder mystery— indeed, my friend was right about that. But Kidd has written a tale beautiful and compelling enough to be a nice summer beach read, and one powerful enough to help the reader “pursue the largeness inside herself” as well.

Rev. Shannon E. Sullivan (she/her/hers) is a life-long feminist and United Methodist currently serving the community of Frederick, Maryland, as the associate pastor of Calvary. She is a proud graduate of Drew Theological School in Madison, New Jersey. She is married to Aaron Harrington, her high school sweetheart, who is a pilot and all around aviation geek. They have one living child who shares their home with cats, a boxer puppy, and chickens in addition to mountains of books and airplane parts.

A Review of Speaking Truth: Women Raising Their Voices in Prayer

I’m not praying for you.
Scroll to top