In preparation for the debut of the sixth and final season of Breaking Bad on AMC on August 11th,I have been 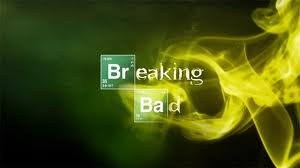 engaging in a marathon of previous seasons. I held myself back from watching the show for a number of years. The subject matter seemed depressing, and I tend towards more positive escapism. However, I was reminded as I watched the first few seasons again of the divine drama that sucked me into this gritty show in the first place.

The premise of the show started as a simple one. Walter White, high school chemistry teacher, father of a special needs teenager and a soon to be born baby girl, devoted husband but otherwise an underachiever and something of a sad sack, is diagnosed with inoperable lung cancer.  His immediate concern is for his family and how he can provide for them after his death. Enter Jesse Pinkman, one time student of Walter’s, now a low level drug dealer who uses his rudimentary knowledge of chemistry to “cook” his own product- methamphetamine.  Out of his desperation, Walter makes a deal he knows is a bad one- he will use his knowledge to produce high quality meth, and Jesse will sell it and split the profits, providing a financial cushion for the Whites.

This show could be a simple morality tale working from the theme that the road to hell is paved with good intentions, and the first few episodes take just that tact. But along the way, as these two would be drug lords make one mistake after another, the viewer starts to become invested emotionally. Jesse the swaggering wannabe with his gangster talk shows himself, through incredibly nuanced character building by the writers, to be a lost little boy, desperate for a place in the world but without the emotional foundation for self respect, addicted to drugs as much for the high as for the false confidence they provide, desperate to love and be loved in return. Walter tries to act like his own idea of a hardened criminal, but instead is tripped up repeatedly by his inability to shut off his fatherly nature, is almost undone when he finds out his cancer is in remission, his mission is over, but his marriage is in shambles because of his overwhelming drive to protect his wife and children.

These two, we are told through the narrative of the show, are too good to be bad. Their instincts are to do the right thing, however, all of this takes place in the context of the production and sale of a drug that is infinitely addicting and destroys the lives of most who use it.  There is no easy moral judgment here, there is no black or white in this story.  As the seasons progress, the stakes get higher, Mexican and American drug cartels become involved as well as the DEA. But throughout the series the central question is whether there is redemption for these two main characters, the love starved child and the disillusioned father. Throughout the episodes, it is the moments of grace that keeps us watching- Walter checking Jesse into a rehab facility even as he increases production of the drug, Jesse buying a deceased aunt’s house with drug money, finally finding a home amidst the memories.

The sixth season of Breaking Bad is planned as the final season. It is doubtful that every loose end will be tied up, and I’ve asked myself what sort of ending would be satisfying. The answer, for me, is the one so many of us wish for when things have gotten uncontrollably complicated, when everything seems like it has been broken irreparably and it is all our fault- I want things to go back to the way they were, so many episodes ago. A happy home for Walter; Jesse’s problems still small time. And that, of course, is the one ending that is impossible.

Mariclair Partee is the assistant managing editor of Fidelia's Sisters, and serves as a college chaplain and parish priest in Philadelphia. When not seeking out theological undertones in her guilty television pleasures, she spends time with her husband exploring their new city and stops to pet every dog on the sidewalk.
https://youngclergywomen.org/wp-content/uploads/sites/3/2017/05/YCWILogo_Vert_Black-300x229.png 0 0 Mariclair Partee https://youngclergywomen.org/wp-content/uploads/sites/3/2017/05/YCWILogo_Vert_Black-300x229.png Mariclair Partee2013-08-06 10:48:032018-11-13 11:45:03God, Grace, and Breaking Bad

Images from “In Whose Image?”

Always an Associate?
Scroll to top