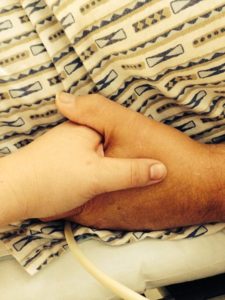 Sometimes the hands of God are right in front of us

My father was a force of nature. He was a big man, both physically and in spirit, and had the kind of laugh that had a way of booming itself across a room, hovering for a while before dissipating. As a little girl I was fascinated by his size, putting my hand up against his and watching in awe as his fingers closed around mine, hiding them away completely. There was such safety in seeing my smallness tucked up and protected in the hugeness of his hands.

Still, he looked impossibly small when I walked into his ICU room many years later, where he lay stricken by a sudden infection that would take his life. He was a big man made tiny and still beneath a nest of tubes, his face obscured by the ventilator that kept his chest rising and falling with mechanic precision. The years between being an awe-struck young girl and a fully grown, ordained woman had not been kind to us, and I found myself standing next to a man that I loved with the whole of my heart, but who felt so very much like a distant stranger, a person to be wary of.

My father was a man who walked between worlds of light and dark. In the light stood his faith, his joy, his playfulness bordering on prankster, his sweeping generosity. Our church loved him deeply and it was a love that was richly returned. Everyone drew close to his light, which seemed to radiate warmth. There was a sense about him that no matter what might go wrong, he would set it right, and over the course of his years in our church leadership he did so again and again. But he was a man in whom shadows made their home as well. His joyful side would fade and he’d quickly become withdrawn and disengaged, choosing to be alone in his office or his bedroom instead of spending time with his family. He was quick to temper and could be casually and laughingly cruel – though usually only to his family and closest of friends. We loved him because we could not possibly do otherwise, but each of us carried with us the wounds of that love.

My father’s illness lasted a month to the day, and he was conscious, even talkative, for most of it. The days mostly blur together, but I remember my anger with clarity. I was absolutely furious, pacing trenches in the halls of the hospital. I railed against God, a madwoman in her clerical collar, shouting at heaven from the parking lot. My Presbyterian theology taught me to expect my prayers to change me, not to change God’s mind, but I had no patience for that. I had no patience for God’s plans, and cared not at all what was going on in God’s mind.

My fury did not remain focused solely on God for very long, though. As my father’s illness progressed and our hope for his recovery began to slip away, my father set out to illuminate our financial situation, over which he had maintained iron-fist control for the entirety of my life. Before we knew what was happening, he was rattling off credit card number after credit card number – twenty-nine in all, mostly full. Then he gave us the bank passwords, which revealed more unexpected debt. A student loan that we’d long believed paid off showing a significant balance; a second mortgage that was three times as high as expected. It was not long before I discovered that I had enough fury for both God and my father.

But grace is a strange, and at times visceral, thing that has a way of making its presence known, even in a hostile environment like my heart. As I seethed in my seat next to my father’s bedside, I watched my mother stand. For all the wounds I carried from my father’s love, my mother arguably carried more. And yet as I sat, I watched my mother stand and lay her hands on his cracked and swollen skin. She said nothing at all as she stood for hours, running her hands gently over his legs, soothing the pain and pressure that built inside them. He had no words of thanks to give her, no apologies for the financial mess he’d created, but still she stood, and still her hands soothed.

Feeling a bit of the awe from my childhood, I took my mother’s cue. Though my anger still burned, I set my hands on my father’s scalp, running my fingers through the remains of his white hair until my hands ached and my fingers smelled of oil. And suddenly, in that time and place, there was no space for my anger. Because there was no space for hers, either. That time would come later. In that moment, we laid our hands upon my father’s skin and let God’s grace find us where we stood.

My father died a week later on his sixty-third birthday, and in the days that followed, my anger at God and my father accompanied me continually as an unwanted shadow. I agonized over what I could possibly say during his funeral, over the difficult truth that, as a minister with a number of funerals already under my belt, I could find no words that would both be true to the whole of who my father was and feel right under the circumstances.

And so I stood and sang the only words that could walk with truth between both worlds of shadow and light:

Amazing grace, how sweet the sound that saved a wretch like me.
I once was lost, but now am found, was blind, but now I see.

For both my father and for me, the only place where we could stand in the end was on the solid stone of God’s grace and love that binds even the most broken of hearts together.

Rev. Lauren Evans now joyfully serves the congregation of her childhood in Southern California as their Parish Associate of Congregational Care, where she cares for the people of God who raised her in faith and runs a regular grief program for the community.

Life at The Table

Circling Around Grief, Celebrity and Otherwise, in 2016
Scroll to top