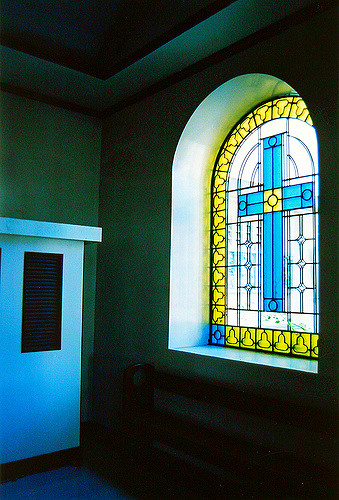 When it comes to confession, Anglicans have historically leaned hard on the “none must” part of the traditional phrase, “all may, some should, none must.” Confession is a scary thing to contemplate. It’s too Catholic. It’s too old fashioned. It’s too …. vulnerable. Many Episcopalians and Anglicans I’ve met aren’t even aware that private confession is available to them. It’s a rare thing to see drop-in times listed on the sign outside an Episcopal church, the way there often are on Catholic ones.

While it’s true that we don’t believe sacramental, private confession is a requirement for every Christian, over my years as a priest, there has scarcely been a greater privilege than to hear the confessions of penitent sinners, and proclaim to them that their sins are forgiven. The first parish I served was pretty high up the candle, so I had heard ten confessions before I did my first baptism. Some people made appointments to come and see me before a big gnarly medical procedure that frightened them. Other people came during drop-in times, because it was routine for them. A habit. Whatever their reason, they all left with their shoulders a little lighter for the sharing of something that had burdened them.

As a semi-regular penitent myself, I’ve felt the lightening of the load that comes from receiving the good news that my sins are forgiven. No matter what I’ve done, no matter how big a mistake I’ve made, God forgives me. No matter how mad someone else might be at me, no matter how much I still might need to make amends to them, God forgives me. I’ve recently gotten into the mindfulness trend of building stillness into my day, and sitting quietly with a meditation app when I get stressed, but there is no app like hearing another human being who has heard the very worst things I have ever done respond by telling me God still loves me.

No matter your denomination, no matter your relationship with the tradition of private, sacramental confession, there is value to the ritual of making regular, intentional confession. While it’s something you could begin to practice on your own – lighting a candle, perhaps, and kneeling in the privacy of your own room – I strongly believe that having a human listener is what makes private confession so powerful. For many people, one of the benefits of therapy is being able to tell another person your worst thoughts, the worst things that ever happened to you, and to have that person tell you that so many others have experienced that same feeling. That you’re “normal.” We so often feel very alone, and it’s comforting to hear that other people are in the same boat.

So if you can, find a confessor. Some evangelical traditions have relationships called “accountability partners.” What if you found someone, not to judge you and keep you to account, but to tell you, regularly tell you, how much God loves you in the face of the worst things you’ve ever done? Someone you could trust to keep that secret? While Anglican sacramental theology would encourage that to be an ordained person, entrusted with the authority to administer God’s sacraments, there’s no reason that for Christians with different theological views it couldn’t be a trusted friend of any order of ministry.

Some people worry about the secrecy of the confessional. I used to teach youth about confession, and they thought it was like therapy – if they say they’re going to hurt themselves or someone else, then I would tell their parents or someone else in authority. I told them no, the Seal of the Confessional is morally absolute. The Church has recently declared that persons confessing sexual abuse of children must be reported, because of horrific inaction in the past. But that’s the only exception. Period. Anything else? Stays with me (and God). Forever. No matter what.

It is my immense privilege to hear the deepest secrets of folks’ hearts. I feel the weight of them as the words tumble out, and it almost brings me to tears. Afterward, I practice what one seminary professor called “holy forgetfulness” – I give that weight to God, and let go the secrets I’ve heard. The great power of hearing confession comes with great responsibility, one that anyone you trust enough to hear your confession should take seriously. If you’ve watched enough Law & Order, you know that there are clergy willing to go to jail rather than break the Seal of the Confessional. That’s as it should be. While the outcome of confession may (rarely!) involve the priest and penitent going together to confess to law enforcement, any confessor worth their salt would be willing to accept the consequences that may come from keeping these crucial secrets.

That secrecy is vital to the heart of confession. No one would truly confess the burdens that lie heaviest on their conscience if they thought there were any chance they would ever see the light of day. The vast majority of confessions don’t involve any prosecutable offenses anyway – though the confessor may encourage the penitent to share their confession with those most affected by the consequences of their sin and make amends. We all feel better when we are able to lay the burden of our sin down by the riverside and take up instead the yoke that Jesus offers. The easy yoke and light burden Jesus commends to us is easy and light because it’s a burden that’s shared with him, and made lighter by his help in carrying the load.

I wish more people would take advantage of this opportunity to lay down the burdens they’ve been carrying, some for many years. I wish more people would take off their armor for a moment, and allow God, speaking through Her priest, to tell them that She loves them so very much, and that whatever they’ve done, She will make right. There’s a poster I see a lot. It says, “Be kind, for everyone you meet is fighting a battle you know nothing about.” We all spend a lot of time armored up, ready to do battle. In confession, we lay down our arms and rest in the everlasting arms of Our Lord and Savior, Jesus Christ, who takes all our burdens, puts away all our sins.

The Rev. Jordan Haynie Ware is a Texan transplant to Edmonton, Alberta, Canada, where she serves as rector of Good Shepherd Anglican Church. Jordan is the author of The Ultimate Quest: A Geek's Guide to (the Episcopal) Church, and co-host of the podcast Two Feminists Annotate the Bible. She lives with her husband, an educator at the local science museum, and their retired racing greyhound.

Made to Flourish: An Introduction to Millennial Womanism
Scroll to top