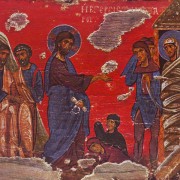 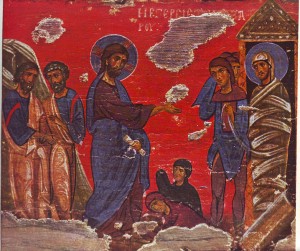 You’d think I would be grateful
for a second chance at life—
if you can call it that.

The first death, you see,
was relatively swift, and unexpected,
and anyway, I was delirious
from the fever.

The second
is biding its time,
maddeningly.

The chief priests needn’t have hired
this one’s desperate cousin
or that one’s shifty uncle.

Death is not so easily shaken.

When the tomb was again sealed,
and the stench had cleared,
and my eyes could bear the day,
it was back, lurking
in the shadows, weighing
down the air, learning
again our routine, marking
each hour, waiting
for a second chance.

I thought I would be grateful.
He called my name—I heard it—
as if from under water—but I heard it—Lazarus!
But the creature who stumbled out of that tomb
blind and wretched and doomed
was not Lazarus.  He was—I am—
“the one whom Jesus raised”—a freak,
a stranger in my home.

Mary and Martha have been kind enough
and attentive, the way one is
with an amputee, the beloved brother
home from the war at last, drunk
and thrashing about, hurling insults
at every well-intentioned soul
who averts her eyes and walks
on tiptoe and implies he should
make the best of it, be grateful
for what he still has.

No one dares ask about that day yet,
but they steal hungry glances
and their movements are awkward
with the pretense of respect.
Tell us again, they want to say,
how you staggered
from that stinking cave, tearing
at your bindings, gasping
for air and groping
toward the light.

Emily Rose Proctor is a pastor and poet currently serving as the Director of Young Adult and Global Outreach at Riverside Presbyterian Church in Jacksonville, FL, where she lives with her husband Richard, who is an Episcopal priest and drummer.

A New Way to Pray

The Intensive Company of Women: Five Reasons Orange is the New Black is Useful...
Scroll to top