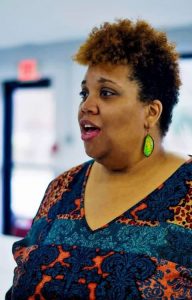 What made my trip to Wakanda even more special was that I shared this momentous occasion with millions of people in the world, particularly people of the African diaspora. Many of my friends and associates had already seen Black Panther twice by the time I saw it on the Sunday night of its opening weekend. I have never felt such an energy of love for Blackness blended with an anxiousness to see any movie in my life. Who knew that a fictitious movie would cause people nationwide to come together in one accord with Black pride, wearing Dashikis, African attire, or dressing in all Black, and taking selfies in front of countless Black Panther posters?

Simply put, I love us [African diaspora peoples]! Who else would dress up as King Jaffe of Zamunda from the movie Coming to America, bring soul food plates to the movies, and flash mob African dances after seeing a film? When the question of “Who does that?” is asked, the answer rings clearly: “Black people.” Black Panther has given us the unwritten permission to be Black, do Black, and act Black in various ways. This journey to Wakanda is one we take together.

Director and writer Ryan Coogler brilliantly and intentionally incorporates various themes of the Black life, as he stretches the imagination of the viewers to consider what our lives could be if we examined the reality of the Black life. It was no accident that he situated the context of Erik Killmonger’s upbringing in Oakland, California, the birthplace of the Black Panther party. Historical and political themes were carefully threaded through every scene. As a result of this careful weaving through of Blackness, Black Panther became more than just a movie; it became a reworking of our imaginations into what our society should and could be.

I have read numerous Facebook statuses and think pieces unpacking these themes, as well as expressing awe and joy, fused with discontentment. The latter arose from witnessing on the big screen the quotes and behaviors that reflect the lived encounters of us and our ancestors: realities of global oppression, the complicated relationship between Africans and African-Americans, gender role inequity, and most acutely, the choice of bondage or death, which so many of my ancestors had to make. The gut-wrenching emotions of confusion and anger flowed through my mind and body, as I wrestled with the key plot question of justice for African diaspora people all over the world, namely, whether Wakanda’s wealth and technology should be shared to liberate. This thought-provoking journey continues to perplex and inspire me with what I witnessed in Wakanda.

I believe that art imitates life and life imitates art. Thus, my pilgrimage to Wakanda leads me to ask key questions:

What can we learn from Wakanda? Perhaps the answer begins with a lesson in the unwritten permission for Blackness flowing into our everyday lives, leading to equity and liberation.

Is this unwritten permission welcomed? How will this pride shift the socio-political landscape in the United States of America, Africa, and other countries?

Will this shift cause the power of white supremacy to decrease and eventually be dismantled?

Will the Black woman finally receive the equality and equity that she longs for and deserves in Black communities, churches, workplaces, and society?

Can we explore what reducing the power of whiteness in white people will look like?

I personally hope that the Black Panther theme of the co-leadership of men and women, marked by equality and a working together for a common goal, will become a reality in every facet of my life. The role of women in Black Panther is unequivocal: T’Challa would not have been successful (or even remained alive) if it weren’t for women. Is this art-imitating-life reality of equity and mutual cooperation a reality for our men and women as well? Fueled by my journey to Wakanda, I dare to believe it could be.
WAKANDA FOREVER!

Crystal Rook, MDiv, MACC, is an ordained Elder, Activist, Community Organizer, Womanist Theologian, and currently serves as a Youth Minister at Exodus Church in Winston-Salem, North Carolina. She passionately works in the intersections of Food Justice, Faith, Race, Spirituality, & Body Politics particularly in the lives of Black women. She enjoys Marvel movies, life-giving fellowships and relationships, self-care activities, and seeing people blooming and living holistic lives that God intended for them to have.
She can be reached on Facebook: @CrystalRook; Twitter: @crystalrook; Instagram: @crystalrook

Godless Politicians Can Save Their Thoughts and Prayers

Lament in a Purple Church
Scroll to top