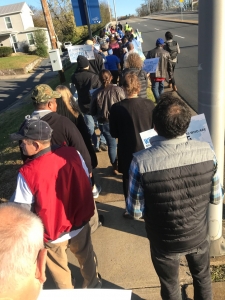 There is much to celebrate in all of this, as our elected representatives start to become just a little more representative of the diverse population of the United States. It’s a start. And yet. Lest we get too comfortable, or too self-congratulatory, I have a message for my white sisters: we’ve still got a lot of work to do.

Women have come together quite a bit in the past two years to stand up against and fight systems of patriarchy, but the majority of white women are still voting for candidates who support policies that further entrench white supremacy and patriarchy, and are devastating for the most vulnerable people in our midst. The evils that are being perpetuated are anti-immigrant, anti-woman, anti-child, anti-family, anti-LGBTQIA+, anti-black, anti-Native American, anti-poor, and so on. If more of us white women would join our sisters of color in standing up for the well-being of all people, in working for real justice and positive change, we could move the mountains that separate us from those goals.

At the time of the Babylonian exile, Jeremiah wrote to the exiles this word from God: “Seek the welfare of the city…and pray to the Lord on its behalf, for in its welfare you will find your welfare.” (Jeremiah 29:7, NRSV) The Hebrew word translated as welfare is “shalom”—usually translated as peace, but also meaning wholeness.

White women have a long history of clinging to the powers and privileges of our whiteness at the expense of our siblings of color, or those enduring other forms of oppression. I think much of this today is unintentional, and the result of unexamined whiteness, or failure to understand that our liberation from sexism is also tied up in liberation from white supremacy, ableism, heterosexism, xenophobia, and other forms of oppression or discrimination.

As Christians, we follow a savior who consistently chose solidarity with those furthest on the margins—with women, with the poor, with the sick. One who voluntarily gave up even divinity in order to unite with us in our need, in order to bring us to reconciliation and shalom. When we cling to the powers and privileges that we enjoy at the expense of the reconciliation and wholeness of all of God’s people and creation, we cease to follow the one whose name we bear.

I celebrate with our sisters who were elected to public service in these midterms. I also recognize that they will continue to face uphill battles working for change within systems that have been built to protect white cishetpatriarchy. We must stand in solidarity with them, and be ready to support and work alongside them in their shalom-making work. It can be tempting to take these victories and pat ourselves on the back for how far we have come. Had Hillary Clinton ascended to the White House two years ago, it would have been a huge milestone for all women, but it also would have been easier for many white women to overlook the ongoing systemic issues of power and oppression that still need to be dismantled.

This work is happening in various places, but not often in the church. Especially not in predominantly white churches, where this work is often seen as too political or too divisive. It can be uncomfortable to confront our privilege and the ways in which white Christians perpetuate and benefit from systems that are built to sustain white supremacy – including many church institutions – but it is necessary work.

As Christians we also believe that we are pressing ever closer to the kindom of God, the beautiful, inclusive, diverse beloved community where justice and peace kiss, and where there is true Shalom. Pressing towards that goal demands that we engage in the hard work of reconciliation here and now—and not primarily as the leaders in the work. I celebrate the election of voices long silenced who are calling us prophetically to take up the cause of justice for all. And I pledge – in my life and in the church – to continue the work of examining my own whiteness, engaging in conversation with other white Christians, and working together to dismantle the systems that hurt all of us.

May we seek the shalom of the place where we live, for our shalom is tied to it. Amen.

Stephanie (she/her) is a white cisgender Presbyterian minister and mother serving the faithful people at Trinity Presbyterian Church in Harrisonburg, Virginia. She is a strong one on the Enneagram and drinks her coffee black.

The Freedom To Dance & Worship

Why We’re Thankful
Scroll to top