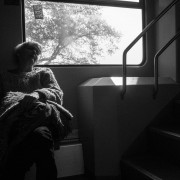 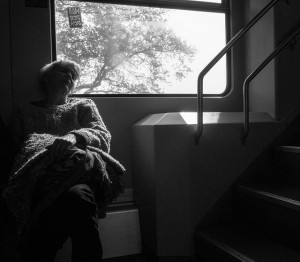 “A young man named Eutychus, who was sitting in the window, began to sink off into a deep sleep while Paul talked still longer. Overcome by sleep, he fell to the ground three floors below and was picked up dead. But Paul went down, and bending over him took him in his arms, and said, ‘Do not be alarmed, for his life is in him.’” –Acts 20:9-10

I do not normally preach from a manuscript, so I have plenty of opportunity to watch my congregation as I deliver the sermon. When I look out into the rows of people before me, I see faces stern with concentration, some laughing at a joke or whispering to a neighbor in explanation, most people caught up in contemplation of the words I am speaking, following my hands, watching my lips to understand and my eyes to get the sense of my expression. Always, too, I see at least one person who is nodding off. He may have his Bible open before him in an attempt to look as if he is “reading,” or she may jerk suddenly awake every now and then only to sink slowly back into a shallow slumber. I am not offended when I see people falling asleep during my sermon. In fact, I usually smile to myself, gratified that my parishioners are at rest.

If I am indulgent towards my sleeping parishioners, it is perhaps because I would like to grant them what I have so much trouble obtaining for myself. In my adult life I have experienced sleep deprivation due to a number of factors: the predictable but no less debilitating lack of sleep after my son was born, the nights I spent worrying during my divorce, the stress of juggling a full-time job with single parenthood, followed by the emotionally exhausting work of remarriage and the formation of a step-family. Insomnia became my close companion, and I developed a pattern of non-sleep that grew comfortingly familiar. I spent many nights entirely awake, or perhaps only napping on the couch for a few hours, and for a long time I was almost proud of my ability to keep going on so little sleep.

Most people around me accepted my night-owlish ways unquestioningly. They seemed to equate my sleeplessness with a good work ethic, perhaps because I often accomplished an extraordinary amount of work during my bonus hours awake. American culture dictates that we should work hard and play hard—but especially work hard. Unfortunately, “rest hard” has never found a place in this maxim. Although the culture around me did not create my sleep problems, it celebrated and to some extent encouraged my excessive awake-and-working hours. I soon found myself dependent on my insomnia, knowing I would not be able to keep up the same workload without the extra time. I was caught in a cycle in which I could not—and would not—sleep.

I know I can’t be the only person who struggles this much with sleeplessness. If I, with my flexible work schedule and profession’s emphasis on “self care” can’t seem to find a way to sleep well and often, then I have no doubt the members of my congregation are battling the same exhaustion and fatigue. They live in the same culture I do, experience the same pressure to get more and more accomplished, and probably sacrifice rest and relaxation for the needs of family and the demands of productivity.

To my own shame, the cultures of the churches I have pastored have fostered and encouraged such sacrifice. Our program calendars have been full of activities, and I have frequently pressed parishioners to take on leadership roles and responsibilities that may have overwhelmed them. I thought that all of these things—the programming, the leadership, the faith-community tasks—would help to grow my members’ spiritual lives. But what if, in the busyness my church demanded, we were starving them instead, or at least dangerously unbalancing their spiritual diet?

Most of the results of my own busy, sleepless lifestyle were foreseeable. Physically, I lacked energy and seemed to catch colds and other viruses easily. Mental and emotional symptoms also began to manifest: I had difficulty focusing and developed uncharacteristic mood swings. The spiritual effects of sleeplessness were the ones that surprised me. I felt distant from God and deeply unsatisfied with the normal rhythm of my faith life. I was too tired and impatient to wait to hear God, so I stopped listening. It was a slow process, but after several years of sleeplessness, I witnessed the depletion of all of the facets of my being that had given me strength, stability, and a reliable connection with the divine. Were my parishioners feeling this, too?

The Ten Commandments include the instruction to observe the Sabbath, a day set aside for rest, just as God rested on the seventh day of creation. Rest is of such high value to God that it is not only practiced by God, but also demanded of God’s people. Throughout the Hebrew Bible, God encourages creation to sleep, and promises rest. In Psalm 23, the Psalmist says that God (personified as the shepherd) “makes me to lie down in green pastures, he restores my soul.” Reading through the Bible for verses about sleep, I see a side of God that is familiar to me as a mother. How many times have I watched my son fuss and misbehave, and insisted that he take a nap because I know his momentary bad temper stems from tiredness? God insists that we rest. Looking around the world at the messes we have made and the bad temper we display, I can understand why rest is important to God, and why it should be important to us.

Given the biblical emphasis on Sabbath rest, it is tempting to rationalize that rest alone is good enough and therefore sleep is expendable, but God works while we are sleeping. Scripture is filled with stories where God appears and speaks to people while they sleep. For example, God (and the famous “ladder to heaven”) was revealed to Jacob in a dream, and Joseph’s dream about his own greatness was the beginning of an unfolding destiny for his family. Later, the baby Jesus is provided a stepfather and saved from Herod’s wrath because Joseph heard God’s instructions in dreams. Pilate’s wife “suffered” a dream about Jesus that led her to warn Pilate during Jesus’ trial (although Pilate largely ignored her). God often speaks to us in dreams, and dreams do not happen without sleep.

Knowing the physiological importance of sleep as we do, and acknowledging the Biblical commands of God to sleep and to rest, we pastors have a task before us. Not only is it important for us to find a way to model rest in our own lives, but we must actively confront the assumptions of our wider culture that busy is best, or that those who take time to rest are lazy. Perhaps even more difficult, we are called to challenge the assumptions of our church culture that “sabbath” means listening intently to 40-minute sermons, or rushing children and youth to and from church activities before finally making it home an hour past bedtime. Where is the space for rest and true Sabbath in our churches? If people come to us seeking relief and respite from the constant, nagging expectations of the outside world, what will they find here?

It’s possible that my congregants fall asleep during worship because they are inconsiderate or because my sermons are boring. But I think, more likely, they are just exhausted. They are tired out by a world that demands much of them and gives so little rest. They are stretched by a church that demands much of them and does not value rest as it should. I hope to help change the culture around Sabbath and rest in my own congregation. In the meantime, my parishioners will not receive judgment from me, their pastor. When I see them nodding off in the pews I am glad that they are in a place where they feel safe and comfortable enough to rest, and I will pray that in sleep, God is giving them the strength and wisdom they came here seeking.

Kelsey Grissom is the Associate Pastor at Asbury United Methodist Church in Birmingham, Alabama. She and her husband, Lee, live with their two boys and far too many pets.

The Power of Plastic
Scroll to top