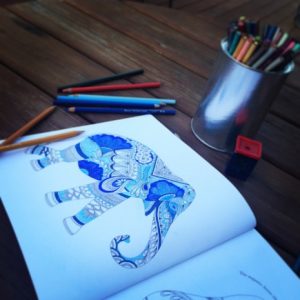 Color me skeptical. When I first noticed craft-store and grocery-store displays of mandala coloring books, artist-quality colored pencils, and overpriced pen sets, all marketed to adults, I winced. Don’t get me wrong. As an artist and former art teacher, I’m excited when the mainstream crowd gives a nod to the arts. And as a children’s minister, I’m equally jazzed when adults trade their carefully constructed decorum for childlike fun. (My sixty-something, always elegant senior minister once raced through an enormous, inflatable bouncy house at our church picnic, and I count it a blessing to have witnessed such joy.) And yet, I felt uneasy about the adult coloring trend. The commercialism of all the mass-produced coloring books raised an initial red flag for me, but the nagging feeling in my stomach didn’t stop there. At first I couldn’t put my finger on the cause of my growing grumpiness, but then it hit me: all the intricately drawn coloring pages seemed controlling. Sure, marketers were touting these books as creative and meditative outlets, but weren’t they really just enticing us to color inside the lines?

My inner art snob teamed up with my slightly rebellious personality and had a heyday. I rolled my eyes when friends posted photos of their (incredibly beautiful) completed coloring pages on Instagram. I asked myself why an adult would want to conform to someone else’s design ideas instead of creating her own original artwork. I grumbled that the “creativity” peddled by the adult coloring trend was nothing more than a myth: creativity doesn’t emerge from engaging in the same process as everyone else.

So when the idea to review what I’d snarkily dubbed the “Crayola Craze” arose, I jumped at the opportunity to reveal the dark side of this new phenomenon. I wanted to educate readers in the ways of the art world. I wanted to invite them to discover within themselves a well of creativity independent of anyone else’s carefully measured lines and boundaries. I wanted to encourage them to draw or doodle or paint on (gasp) a blank sheet of paper or canvas – or in the sand, for that matter. Do your own thing, folks! Just be free!

But I was the one who needed an education.

Anita was a week out from having had total knee replacement surgery. When I visited her, I noticed the coloring books and colored pencils neatly stacked on the table next to her chair. There were novels there, too, so I asked whether she’d been reading anything good since her surgery.

“Oh, no,” she replied. “I have too much pain to read. I can’t concentrate. But some friends brought these coloring books. They’re perfect.” She explained that coloring kept her mind distracted from the pain without requiring her focused attention.

“But, doesn’t it feel like you’re having to follow someone else’s plan? Like you’re being made to color inside the lines?” Before I could finish protesting, Anita was already shaking her head no.

“Sometimes you need the lines,” she said. “I can’t draw a stick figure, and besides, if I saw a blank page, I wouldn’t know where to start. Plus, I don’t have that kind of energy right now.” She had a point.

With Anita’s endorsement in mind, I bought a coloring book the next day and brushed the dust off my colored pencils. In order to offer a fair critique, I’d resolved to commit to coloring for awhile. Admittedly, at first I still felt annoyed by such a controlled process. But then I began to notice that even within the lines, there were creative decisions to be made. Which colors would I choose? How would I vary the pressure on the pencil to change the value of each colored section? Would I leave some spaces blank? Would I create my own designs or write the names of those for whom I prayed in the background? More importantly, what posture would I assume while coloring? Would I pray? Listen to music? Color in my coloring book while my youngest daughter colored in hers?

As I folded a bit of coloring into my daily routine, the lines I had originally seen as a prison holding my creativity captive evolved into a garden, a place set apart, in which my creative impulses could flourish. I knew my opinion had turned when, after a particularly tough funeral, I found myself simultaneously coloring and crying in my office.

Sometimes we all need the lines. When we don’t know where to start, we need a place to take the next step: a way forward, a path to wander, a labyrinth in which we cannot get lost. In the Ancient Near East, an area on the periphery of the temple was demarcated as a place where those who were curious could gather to observe what was happening inside. This area, over time, became known as the Court of the Gentiles. As the adult coloring trend becomes a part of my own spiritual practice, it seems to function in a similar way. Coloring is one of many entry points to the Holy. It’s one place to begin when we don’t know how to pray or how to listen for God. It’s a modern-day Court of the Gentiles where we can be curious and try on faith until it fits. It’s one way we can respond to God’s invitation to rekindle the creative fire in our souls.

Austin Crenshaw Shelley serves as the associate minister for Christian education at the Presbyterian Church of Chestnut Hill in Philadelphia. Before going to seminary, she taught visual art (and Spanish and Latin) to middle and high school students. She still enjoys the thrill of opening a box of crayons, sharpening a colored pencil, and making the first brushstroke on a blank canvas.

Why I Go to Church on Sunday, Especially When I Don’t Want To

Pastoring After Orlando
Scroll to top