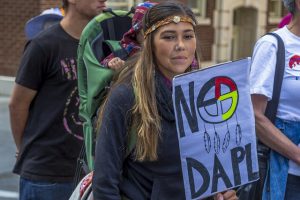 My childhood in rural Alaska was defined by three things: my Christian faith, a connection to specific land, and big oil. My Lutheran grandparents homesteaded in Alaska in the early 1960s, and the 160 acres they claimed remains one of the most sacred spaces in my life. My mother’s family still lives on that land, her brother in the house that includes the original homestead cabin. The ashes of my grandparents now rest in the middle of that land, in the family cemetery.

I thought immediately of that holy plot when I saw the images of bulldozers leveling the sacred burial site of the Standing Rock Sioux tribe in North Dakota three weeks ago. My family’s burial site is protected by the local and state government: it cannot be built on or plowed under by law. Yet no such protection was afforded a site much larger, older, and more sacred than mine. I felt the wrongness of it in my bones.

Oil is also part of my family history. My dad worked on the North Slope oil fields for 35 years, building the Trans-Alaska Pipeline, and working in the well houses that pump crude from land leased by Alaska’s Native tribes to British Petroleum and other companies. I worked on those fields myself during college summers. In that time, I saw both the high standards of accountability to which tribal authorities held the oil companies for protecting the land, and the incremental and dramatic ways in which oil production changed that land and the lives of the (mostly) Native people who live on it.

Alaska is different than other places in the United States: in Alaska, Native people have greater economic and political influence. This is true in business, government, and also in the church. I understood from my early experience in the Lutheran church of Alaska that our Christian faith and Native beliefs had much in common, and I saw firsthand a beautiful confluence of Native and Lutheran traditions.

One of those shared traditions was honoring all of creation as sacred and worthy of equal dignity with humans. I remember a Lutheran mission trip in Southeastern Alaska where our ELCA clergy guides led us in asking the forest’s permission, using traditional Tlingit language and prayers, to use its bark for basket-weaving. In my childhood experience, it was clear that the “serving and keeping*” of the land (Genesis 2:15), described as God’s intention for human beings, was not a willy-nilly clearing of land, pumping it dry of resources to benefit the human race.

Instead, my Alaskan Lutheranism taught me about the mutuality of creature relationships between human, animal, land, air, and water. It impressed upon me the weight of making decisions that would affect the non-human parts of God’s creation. I have heard similar expressions of this mutuality from clergy involved in the protests and encampment at Standing Rock, though the responses of the bishops in my own denomination have been lukewarm and disappointing.

To me, it is clearly part of our Christian responsibility to stand with Native people and any others who wish to give the sacredness of land, air, water, and non-human creatures greater priority than economic and business concerns. It is part of how we honor the intention of our Creator in making us servants and keepers of more vulnerable living things. To do otherwise is to risk losing even more of what our God created good to climate change and other unnatural disasters. As a people who claim an identity sprung from baptismal water, standing in solidarity with protectors of water is our sacred duty and delight.

*I follow Dr. Ellen F. Davis’ translation of this verse from the Hebrew, which uses “serve” rather than “till.”

Collette Broady Grund lives in Mankato, MN, where she shares a wonderful life with Bethlehem Lutheran Church, her husband, their soon-to-be 5 children between them, a well-behaved hunting dog and a very naughty beagle.