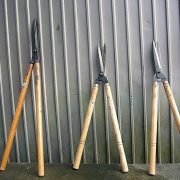 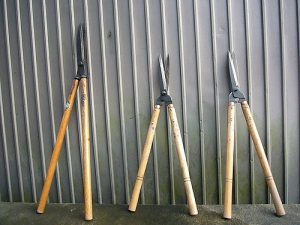 Lies that we live our lives by. Lies that we die little deaths by. These are the kinds of lies Tilda asked us to write down. END_OF_DOCUMENT_TOKEN_TO_BE_REPLACED 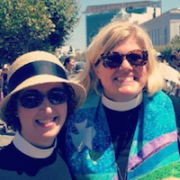 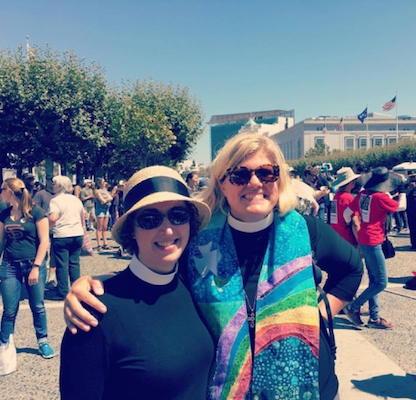 My grandfather, Captain William Eigel, Jr., served in Patton’s Third Army during the Second World War. He landed in Normandy only a few days after D-Day and joined the long, hard push eastward towards Berlin. It was troops from Patton’s army who stumbled across Buchenwald, the first Nazi death camp liberated by the Americans.

Grandpa was not one of the liberators of that camp, but Eisenhower sent a number of American units to see it. He wanted the soldiers to know what they were fighting against. So it’s quite possible that Grandpa saw the camp, the stacks of bodies, the mass graves, the emaciated survivors. He was stationed in Germany for several months after V-E Day, trying to bring some order to the postwar chaos as evidence of Nazi crimes mounted.

Grandpa was horrified by what he witnessed in that year and a half in Germany. He saw what happens when one group of people decides they are inherently superior to everyone else. What made it worse was that he was of German heritage himself. The people who had done this were related to him. He never talked about it, but he never forgot. Twenty years later, my mom asked to go to West Germany as an exchange student, and he absolutely refused to consider it. He couldn’t stand the thought of his child going to the place that had done those horrible things, and living among the people who had done it and allowed it to happen.

We turned a corner this morning in our Old Testament readings. All summer we have been in the book of Genesis; we’ve been hearing the stories of the matriarchs and patriarchs of Israel. We ended last week with Jacob’s son Joseph making a life in Egypt, and his brothers and their families joining him there during a famine. Today we have jumped ahead four hundred years to the time of Moses in the book of Exodus. And the story of Moses begins in Egypt in the reign of Pharaoh.

In the days before Moses is born, there’s a new king in town, a new Pharaoh, who doesn’t know the Israelites or their history in Egypt. He’s nervous about having such a large, powerful group on the borders of his territory, they might ally with the enemies of Egypt, and Pharaoh’s worried about the Israelites outnumbering the Egyptians. Four hundred years the descendants of Jacob have been in Egypt, and still they are foreigners, untrustworthy, not one of us. So out of ignorance and fear, Pharaoh enslaves the Israelites. END_OF_DOCUMENT_TOKEN_TO_BE_REPLACED 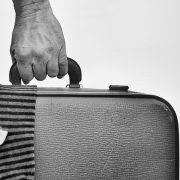 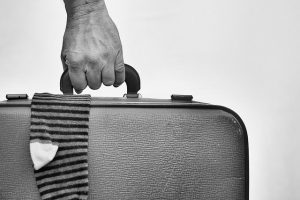 Like many 21st-century churches, the church I serve is a “nested” congregation: it has no building of its own, and rents space from another congregation. Some churches arrive at this kind of arrangement after selling their existing buildings. Others are new church starts, building a congregation from scratch.

Worshiping communities sharing space can be a wonderful thing. It can also be complicated. And, sometimes, it just doesn’t work. My congregation recently ended its relationship with its host congregation, and transitioned to a different space. The transition was challenging, marked with conflict, grief, and resentment. Although “the church is not the building… the church is the people,” as the old Sunday school song goes, it is difficult for the people to say goodbye to the place where their children were baptized, where they were married, where they grew in faith and discipleship.

This liturgy concluded our final worship service in our old space. It would be appropriate for congregations in a similar situation, and also can be adapted for other situations, such as moving out of a house or decommissioning a ministry.

One: God said to Abram, “Go from your country and your kindred and your father’s house to the land that I will show you.”
All: May we go with the God who calls us to new adventures!
One: When Rachel departed from her home and family to make her home with Jacob, she took with her the teraphim, the household gods of her childhood.
All: May we carry with us what has been good, holy, and true from our time in this place.
One: God led the Hebrew people out of Egypt and toward the promised land.
All: May we go with the God of liberation!
One: The Israelites were taken from their homes into exile.
All: May we go with the God who consoles the displaced.
One: Jesus sent the disciples out to preach the Good News to all creation.
All: May we be inspired and imbued with purpose and joy.
One: Jesus told the disciples, “If anyone will not welcome you, shake off the dust from your feet.
All: May we leave behind us all bitterness and disillusionment.
One: Paul wrote to the Philippians, “I thank my God every time I remember you.”
All: May we thank God every time we remember this place.
One: Go forth to be God’s church in this time and place, as the Holy Spirit may direct.
All: In the name of the Father, and the Son, and the Holy Spirit; one God, Mother of us all. Amen. 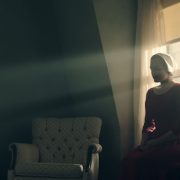 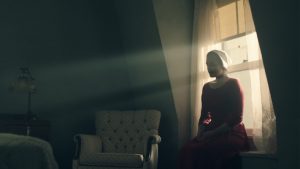 The Handmaid’s Tale, the new Hulu series based on Margaret Atwood’s 1985 novel, needs a trigger warning. It’s “intended for mature audiences,” but it’s hard to watch if you’ve ever been in a relationship with a total imbalance of power, if you’ve ever been pregnant or nursed an infant, or had a child die, or been sexually assaulted. It took me four tries to get through one scene: I kept pausing and switching windows in my browser, so great was my anxiety about what was coming next.

When I first picked up the novel, I was a freshman in college – a preacher’s kid in an interdisciplinary program in Boston. I’d grown up in Midwestern churches, the words of Psalm 19 and the words of institution and my father’s preferred baptismal covenant and benediction etched on my heart. I could recite them from memory years before I entered ministry myself. But when I read Atwood’s novel, which depicts a dystopian future theocracy where women are not allowed to read, much less own anything, work, or maintain bodily autonomy, I did not recognize the ideological roots of the regime as Christian. Atwood’s world-building is incredible; and though I got references to “Loaves and Fishes” and “Milk and Honey,” I felt certain she’d also made up most of the cited religious language. At the Prayvaganza, as a handful of girls are offered in arranged marriage to returned soldiers, the Commander in charge says, “Let the woman learn in silence with all subjection… [For] Adam was not deceived, but the woman being deceived was in the transgression.”

I grew up in churches, but my dad had taken Old Testament with Phyllis Trible in the 1970s. I had no idea what 1 Timothy was about. I was sheltered.

I reread the novel last fall, when #repealthe19th was trending on Twitter. The Nineteenth Amendment, you’ll recall, is the one which grants women the right to vote. The hashtag gained popularity after statistician Nate Silver suggested that if only women voted in the presidential election, Hillary Clinton would win hands down. I’m no stranger now to the realities of misogyny, the ubiquitous evidence of rape culture, even as a privileged white woman, but the threat, however far-fetched, of disenfranchisement seemed to raise the stakes.

In The Handmaid’s Tale, both the show and the novel, a violent act that takes out Congress precipitates the imposition of martial law and ushers in the theocratic, totalitarian regime known as Gilead. Facing cultural upheaval and global infertility, fertile women are assigned to marriages, to serve as handmaids to the wives of powerful men in the manner of the biblical Rachel and her slave Bilhah. These handmaids are infantilized and treated alternately as holy vessels and sluts; they are covered in billowing red dresses and starched white veils; they are stripped of their names, known only in relation to the man they serve, Of-Fred, Of-Stephen, Of-Glen.

After November, it feels all the more timely. END_OF_DOCUMENT_TOKEN_TO_BE_REPLACED