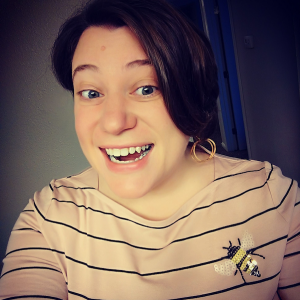 White privilege is marked by blindness to the ways our language hurts and harms others. The process of learning to see is, like the story in John’s gospel of Jesus’ healing a blind man by caking his eyes with mud made of spit and dirt, both messy and profound.

In January, I attended a gathering in Chicago called The Mystic Soul Conference. An outgrowth of the Mystic Soul project, the event combined spirituality, hospitality, community, and justice. The entire gathering centered people of color (POC), which meant that I, as a white woman, was invited to de-center myself. What this meant was explicit: I was not to be the first to speak up in group discussion; I would sign up for care sessions (massage, spiritual direction, body work) only after people of color had done so. White people were not presenters, or organizers, or leaders. The non-POCs present were there to listen, to follow, and to exhale into the work of justice that restored us to our rightful place as co-laborers instead of blind guides.

One of the most powerful lessons from the conference for me occurred in a session called “Dark and Divine: Healing the Light vs. Dark Dichotomy in Spiritual Speech.” Artist and educator Amina Ross led our group of POC and non-POC folk through exercises to explore the concept of darkness. A curator of an ongoing art exhibit in Chicago – featuring artists who use darkness as a medium – Ross invited us to do the same.

I learned that my understanding of darkness has been shallow, one-dimensional, paltry, and feeble. I’ve allowed the simplistic correlation of light = good, and darkness = bad, to rule the way I understand light and dark, both in life and in metaphor. I didn’t even know that I had forfeited so much truth and beauty in my thin imaging, but as I was invited to poke around and become curious about darkness (the world’s and my own), I realized that I had never spent much time asking questions or imagining other possibilities. When we shared our reflections at the end of the workshop, I was surprised by both the depth of other peoples’ answers – clearly, they had spent time considering the ways that darkness was simultaneously a gift and a liability in their own lives – and by the shallowness of my own.

I am ashamed to admit that I have lived, unconsciously but persistently, with the idea that darkness = evil for a long, long time, expressing that idea as anti-black racism in both overt and subtle ways. If light = good, and dark = bad, what does that mean for the ways I see and interact with sisters and brothers who live with darkness as a visible part of their identity?

The Mystic Soul workshop opened up a whole new world of metaphor and morality to me, a world I didn’t even know I’d been missing. Darkness isn’t just scary and evil; darkness also encompasses the richness of the earth, the nurture of the womb, the textured shadows of evening and night and dawn. Darkness includes the restoration of sleep, the unplumbed depths of the ocean, the complicated and creative recesses of mountain caves. Darkness is also the strange new world of bent shadows and weird depths that I experienced last year in the zone of totality during the eclipse. Darkness is rich and varied, thick and layered, healing and comforting and good.

I’m learning that, for me, the work of repentance around white supremacy is as much about dismantling racist imagery as it is about dismantling racist speech. While ideas of light and dark are prolific in scripture, I have been running into them most frequently of late in John’s Gospel. John’s prologue kicks off the creation and incarnation stories with an elevation of Light (the Light shines in the darkness, and the darkness does not overcome it), wherein people who are up to no good love the dark, and Jesus identifies himself as the Light of the World. As a preacher, as a white woman, as someone striving to be faithful to the text and faithful to God’s call to justice, how do I teach and preach these texts without stumbling back into my old, racist imagery?

It is helpful for me to remember that this is a modern struggle. Jesus wouldn’t have talked about lighter-colored people being more moral, or ethical, or holy, since he himself was a dark-skinned man. When Jesus calls himself the “light of the world,” he never meant that light-colored things are good and dark-colored things are bad. The struggle I have with those terms is borne of my inheritance of white supremacy, not from scripture itself.

Light doesn’t always mean color. Light also illuminates. When Jesus calls himself the Light of the World, Jesus is not giving us a convenient metaphor to justify our racist tendencies. Instead, he is inviting us to have all of our sinful, evil propensities illuminated, made visible, exposed, and brought into the light. Jesus is the light of the world – and that means that in him, everything gets revealed, uncovered, and illuminated. Dishonesty and hatefulness don’t stand a chance, since they thrive in secret, and there is nowhere unknown to Jesus.

The light of Christ is working within me, exposing my racist working metaphors for what they are, uncovering the sinfulness of associating darkness with evil and only evil, illuminating my propensities for hatred and oppression, revealing my own white supremacy, and bringing all of this brokenness into the light, where I can see it clearly. Seeing clearly, I can then repent and become, in the light of Christ’s many-colored love, transformed.

Dana Cassell lives in Durham, North Carolina, where she serves as Pastor at Peace Covenant Church of the Brethren. She loves mountains, bacon, books, and her dog, Franny.

Homegrown Terror: A Review of Patrisse Khan-Cullors’ When They Call You a...
Scroll to top